A Beautiful Night For Baseball 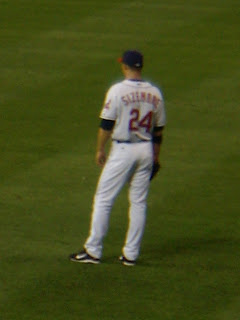 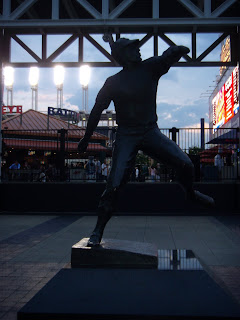 I'm going to steal a page out of Mario's playbook for this post.

1. Because I like the idea
2. Because I haven't had an original thought in my entire life

If it wasn't for Wax Heaven I probably wouldn't have thought to take my camera. I apologize for the quality of the photos. Apparently I take pictures about as well as I blog. After complaining to my my wife about how dark everything was turning out she suggested "why don't you turn the flash off?" Oh...yeah...good idea. Fortunately she was kind enough to not call me an idiot. Unfortunately it was already in the eighth inning and every picture I had taken so far was darker than Bob over on the left there. Oh well. It isn't the last Indians game I'll be going to and I plan on packing the camera from now on.
I was made aware of these tickets at the last minute. It was too late to rearrange my work schedule so I didn't arrive until the 3rd inning. It's a very L.A. thing to do. I usually frown upon late arrivers and traffic beaters, but I'll give myself a pass knowing that it couldn't be helped. These aren't my usual seats. I'm usually on the opposite side of the field on the 3rd base line. It's cool to occasionally sit in a different spot. One bright spot is that I was able to enter through right field and (once again) give my wife a lecture on Bob Feller. As this is (first and foremost) a baseball card blog, anyone reading this already knows who he is. Besides, I think Bob probably deserves his own post. I'll just say that anyone who decides to watch a game at Jacobs...er...Progressive field should take the time to visit this statue. If nothing else it will give you an idea what Feller has always meant to this city.
At this point I'd like to point out that the (hopefully) Grady Sizemore picture at the top of this post was originally right here on the right hand side. It is now at the top because I'm apparently some kind of incredible moron. I wouldn't trust myself with a Speak and Spell right now.
OK. Back to the post. 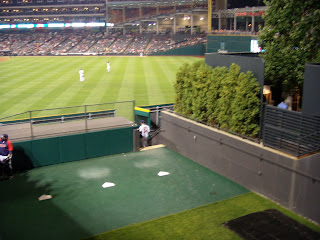 We arrived late. I got a beer. We found our seats and watched an inning. The Tribe was already down 2-0. The kid next to me informed me that an as yet unidentified Oriole hit a HR about 10 feet left of our seat. I'm fairly confident I could have plowed over about 10 kids and their moms to get to that ball. It's probably better that I didn't. People would have complained. Bunch of babies. I've since found out that the mystery Oriole was Aubrey "The Llama" Huff. Big hitter, the Llama.

*From now on I will be referring to anyone who hits a home run as "The Llama" just so I can use that Caddyshack line.
After that inning I needed another beer. Also a few hot dogs and some nachos. I'm nothing if not heath conscious. Strange thing. There was no onion to put on the dogs. They used to have onion dispensing machines all over the park. It was always right next to the mustard (and the ketchup, which is there for kids and foreigners. The people, not the band. I have no knowledge of the band's preference in condiments). Now I can't even get some from the hot dog stand. It's a sad state of affairs to be sure. I plan on writing a strongly worded letter. And this on a night when onion beat ketchup and mustard in the Hot Dog Race by such a ridiculous margin that I thought maybe it was Michael Phelps in that hot dog suit.

I'd also like to take this opportunity to point out that we are getting our asses handed to us by Jeremy Guthrie. He's the guy we drafted, gave a $3 mil signing bonus to. Made a starter in the minors. Kept calling up to ride the bench and pitch out of the bullpen. And finally gave up on. Baltimore claimed him off waivers in early 07 and made him a major league starter. He's now their number one. You know what? Who needs him. He can go bowling with Brandon Phillips and Ryan Ludwick for all I care. We're fine. We've got Jeremy Sowers, Josh Barfield and David Delluci. 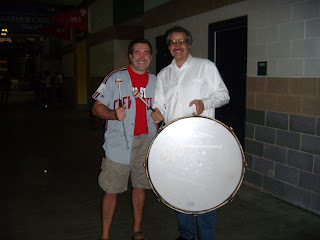 The game was close until the ninth. Brendan Donnelly, making the most of his call up, grooved one to Nick Markakis with 2 outs and 1st open. He did this right after I turned to my wife to tell her "It's OK to walk this guy. He's their best hitter and 1st base is open. We just want to make sure he doesn't get anything good to hit." It was hard to tell but from right field seats it looked like Markakis's eyes got as big as cue balls. He sent it straight back up the middle. Game over.
By this time Juan Rincon is warming up in the bullpen. I'm watching him over the wall and yell "go get 'em Juan" when he gets the call. He is so focused that he doesn't even acknowledge me. The picture above is Rincon exiting the bullpen. He's a machine. He's in the zone. He promptly throws a wild pitch to score the final run. 6-1.
With the game over, we made our way to the exit, disappointed with the loss but content in the fact that we had spent a beautiful night at the park watching baseball. No matter what happens on the field, any night at the park is a good night (unless you're sitting next to a Yankees fan). As we filed out I looked over and saw John Adams, Tribe Superfan. He's been banging his base drum out in right field for 34 years. My wife suggests a picture so as he walks by I ask him. He casually hands me a drumstick and takes the picture.
*That's us up above. I'm wearing my 93 Indians jersey with the Steve Olin and Tim Crews patch on the side. It has the old block letters I love that jersey. It's unbuttoned because otherwise I look like Chris Farley doing "fat guy in a little coat.
Right after the picture I say thanks. I give him the old "you must get this a lot" as it seems like a perfectly reasonable thing to want a picture with him. He just smiles and says "nope". Oops.
So it goes.
Posted by Motherscratcher at 4:51 PM

You capture the happiness of being at the ballpark to watch a game, no matter the outcome. We look forward to reading more.