Cliff Lee and the Stinky Cheese

Cliff Lee continued his season of dreams today as he beat the Royals 10-3. There are 2 Cliff Lees this year. Both are great. The only question is which one will show up.

Cliff Lee #1: The Pedro Cliff Lee. He showed up a lot at the begining of the year when he threw something like 857 shutout innings in April. Pedro Lee nails the corners and makes hitters look foolish with his cutter. An example of Pedro Lee:

Cliff Lee #2: The Maddux Cliff Lee. He shows up when he doesn't quite have his best stuff going. When he isn't painting the corners and striking batters out with his incredible disappearing pitches. Last year Fausto Carmona was killing the opposition and time after time the beaten players would talk after the game about how filthy Fausto's stuff was. How it was almost unfair. I never hear that this year about Lee. What I hear about Lee is "he just pounded the strike zone". Almost like they can't figure out why this guy is any harder to hit than any other average pitcher. And then they look up, it's the seventh inning and they have 1 run on the board. This is always how I felt about Maddux.

I loved Maddux. Still do. (Except in the '95 WS). I liked to call his stuff the "stinky cheese". I don't have the faintest idea what the hell that actually means but it felt right. And it felt right on Aug 10 vs Toronto when this was Cliff's line:

He gave up 8 hits and no runs with only 1 strikeout. He must have had the stinky cheese working that day.

And, he had the stinky cheese in full effect today as inning after inning he had men on base. And inning after inning he got out of it. 4 double plays in seven innings. You never really felt like there was really a chance that he WOULDN"T get out of it. That's how Stinky Cheese Lee is pitching this year. It's just working. This is my favorite Cliff Lee. He's a great pitcher to watch.

This dude is 18 - 2 this year with a 2.34 ERA and close to a 6 K/BB ratio. He's phenominal. And to think that there are probably a million Red Sox fans who will cry bloody murder if Dice doesn't win the Cy Young.

My man crush on Cliff Lee continues to grow daily. 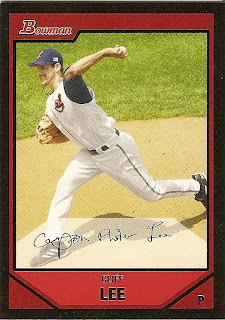 As far as Cliff's cards go, it looks like you can still pick up pretty much whatever you want for really cheap. The nicest card I can find is this 02 Donruss auto /100. It's going for a pretty reasonable $20 right now. Probably be a little higher by the time it closes. I'm not getting it for one reason. I live in Cleveland. I've seen this before. I know how this ends. I'll pick it up cheap next year after the inevitable fall to earth. Let's face it. There's no where else for him to go.

But, here's hoping that in a years time I'm writing another blog post about how Cliff Lee is still throwing the stinky cheese and i sure wish I would have picked up that card last year when it was only $20. That would really put a smile on my face. 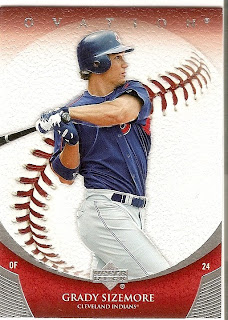 This post was about Cliff Lee and his unbelievable season, but I thought it only prudent to mention that Grady had 4 hits today including a triple and a homer. And, he drove in 7 runs. Not a bad day at the office.
Posted by Motherscratcher at 4:37 PM