I'm on vacation. Really. I'm in a Marriott timeshare hotel thingy in Hilton Head. Left after work on Thursday, got here on Friday. Been doing a lot of nothing ever since. I've already got some stories to tell, nothing very interesting, but maybe worth reading. That's for later, though.

Right now I'm sort of out of options. Vacations change drastically when you have a kid. No more out until closing time. I'm bored but I'm not tired. It's around 11 and everyone is asleep. I can't turn the light on or I'll wake the kid.

So what should I do? Isn't it obvious? I'll do what any number of you reading this would do in my position. I'll grab my wife's computer and write a short post about Kevin Mitchell and his gold tooth. Duh. 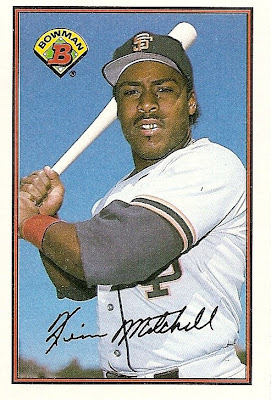 I didn't realize until recently that Kevin Mitchell had a gold tooth. I should also say that I'm just guessing that the tooth is gold. That isn't at all clear in this card. It's merely the most likely material used.

And, that tooth (#9 to be exact) is definitely some sort of metal. It's plain as day in this 1989 Bowman card. The year of this card, Kevin Mitchell had the best year of his entire life. He smashed 47 Hrs. He hit in 125 RBIs (yes, I've said it before. I'm calling them RBIs. With the "s"). This might even be the year he made that over the shoulder barehanded catch.* I can't remember when that was.

*Here's the thing about that catch. Is it really that impressive? If you ever see a highlight real of great catches, that one is always on it. I'm not so sure it should be. I mean, they have a glove for a reason. If he had run to the right spot and gotten himself in better position, he would have been able to use it. Sure, a barehanded catch is fun and rare and all that stuff, but wouldn't most other fielders have just used the glove? I see fans make barehanded catches at every game. And they have to fight off other fans AND not spill their beer and nachos. That's way more impressive. Don't you think?

And, he did it all that year with the gold tooth. 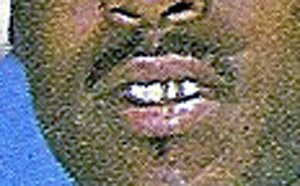 Take a look for yourselves. The photo is grainy because I don't know how to make it not grainy, but it's certainly a metal tooth.

So welcome, Kevin Mitchell. Former MVP, former Indian, highlight real barehanded catcher, and newest member of the Gold Tooth Mafia. It's good to have you aboard. 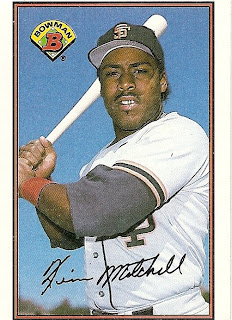 By the way. Here is a scan of the card after I trimmed it to the size of a regular card so that I could fit it in my little card case to bring on vacation. I highly recommend that you do this with all of your 1989 Bowman. Trust me when I tell you that they don't look any worse, and they may look better after trimming. The back remains unaffected. You just lose a little of the top and bottom borders. I wish I had done this a long time ago. I was coming slowly to the decision to either light all of my 89 Bowman on fire, or sell it all on Craigslist for $1,000. Now I have a third option.
Posted by Motherscratcher at 11:54 PM

they need to make gold tooth relic cards just for you.

that mitchell catch was awesome, i don't care what you say. gloves are for sissy girls.

have you played any putt-putt yet?

You cut the Bowman card down to normal size? What a great idea! I may have to look into that option. Or maybe the craigslist option, since I've got bills to pay.

Though not active on the posting yet (currently all the free time is going toward finding a house) I still read your blog every day, homeslice.

And you're in Hilton Head...why don't you and the wife and Grady take a day trip up to Charleston? I'll treat you to a Leinenkugel's.

A gold tooth relic card would be awesome. If they need someone to pull the gold tooth, I know a guy. Didn't play any putt putt, but I did drive by a putt putt course on the way to a bar.

Dubbs, had I seen this comment sooner I would have definately considered it. I very well may be back there again next summer so we may be enjoying a beer together yet.

That might be a real gold tooth, though! Gold is best used for restoring one's teeth. It might be expensive, but it lasts. Some people may really find celebrities wearing one or two. Most of them are men, btw. It's more common now.