As in Great Scott Lewis debut last night. Former Buckeye and current Tribesman Scott Lewis saw his first major league action last night. He looked awesome. 8 innings of 3 hit ball. No runs given up. Masa K. did his best to try to give up a 7 run lead but was unable to overcome that challenge. So Scott Lewis becomes the latest, greatest prospect for the Indians.

Like myself, Scott is a product of The Ohio State University. Drafted in the 3rd round in 2004 despite the fact that he had Tommy John surgery while at OSU in 2003. They said at the time that he had 1st round talent. I was skeptical of drafting someone coming of that surgery but it seems to be working out so far, if last night is any indication.
I like Scott Lewis and am excited for him. He wasn't supposed to make it past AA this season, but here he is, putting together a fantastic debut. It's a bonus for me having a Buckeye make good in the majors. We have no trouble on the football end, but as far as pro baseball players, Nick Swisher is the only other I'm aware of. 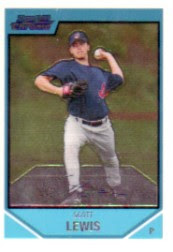 So here is Scott's 2006 Bowman Chrome RC. I'm not sure what other cards have been produced. It isn't much yet, according to Beckett. Like any good Clevelander, I figure he will probably make it 3 Cy Young's in a row next year. Savior of the franchise. Who needs C.C. anyway, right? We have Great Scott Lewis.
You know those morons that get overly excited about one game and go to ebay and overpay for cards? Yeah that's me. Do me a favor and stay away for a few weeks. Let me get mine first. I call dibs.

Posted by Motherscratcher at 12:00 PM