Last night I busted a box of 07 SP Authentic. It was a good time and I like the set. I think I like the SP Rookie Edition better, though. It is more interesting to look at and is much cheaper. I guess Authentic costs more due to the better pulls. I figured I'd share with you what I got. 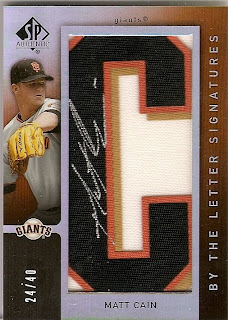 This is the first signature card I got and it is by far the thickest damn card I've ever seen. Don't know much about Matt Cain but his stats look pretty good on baseball reference. I guess the point is to collect all of the letters and then display them in a row. Descent idea. I wonder if the /40 means there are 40 cards for each letter or 40 cards total? Either way, I've got nothing against Cain, but this card will probably end up on ebay when I figure out how that whole thing works. 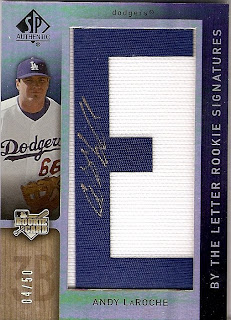 The second "pull" is Andy Laroche. This is a By The Letter Rookie Sig, which is apparently slightly different. I spent the first 5 minutes after pulling this card trying to figure out why I keep thinking his name is Adam. Don't worry, I figured it out. The crazy thing is they're now BOTH on the Pirates. Does the back of their uniforms have both first and last names?

This card too will probably end up on ebay. I've got neither the time, nor the desire to track down the 3 other cards required for Matt Cain, much less the longer Adam ...err... Andy LaRoche.

Now, make a Jarrod Saltalamacchia and that's just ridiculous enough to try. Not that I feel strongly about Jarrod one way or the other. I just think you would get a tremendous feeling of satisfaction from completing something of that magnitude. Don't you? 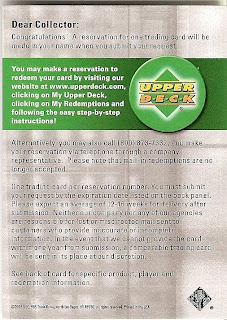 The most exciting thing I came across was my second redemption card ever pulled. The first was from '94 Pinnacle and would have been Rob Nen. I barely missed the cutoff by 13 years so my collection remains Nen-less, as far as 94 Pinnacle goes. Oh well.

This Authentic card does sound pretty sweet. It's a /75 Chirography Duel Sig of Hanley Ramirez and Stephen Drew. I've looked up other Chiropraphy cards and they look pretty nice. Mine should have one of the most exciting young players in the game, a cornerstone around which you can build an entire franchise for years to come. AND, some guy named Ramirez. I hear he has potential as well.

I went straight online and put in the code. It said it should take 12-16 weeks. This one, I think I'll keep for a while as it will probably be the best card I have. You know, aside from Chuck Finley playing air guitar bat.
Posted by Motherscratcher at 10:41 AM

Nice one... UD redemptions usually go smooth for me. Last time they gave me a bonus pack of Tony Gwynn cards as well.

That's great. I never thought of them sending me anything extra. Maybe I should let them know that I have an insanely poplular and important blog and they need to keep me happy.

"I barely missed the cutoff by 13 years..." That is hilarious!! Great stuff!

Congrats on the Pull. I have a Lincecum/Miller Chirography. You will be surprised by how small the sigs are.