I've got this sweet Chipper card I want to show everyone. It's a 2003 Diamond King. The back says that Chipper was a Diamond King in '97, '01, '02, and '03. So this year marked his induction into the prestigious 5 Timer's Club, joining Steve Martin, Paul Simon, and Alec Baldwin, among a few others. Not exactly lightweights.

Actually, the reason I'm showing you this card is to get a little help from Dayf. It isn't a regular card from the set. The picture is set in the card and the border is a white felt material. So, what kind of parallel is this? 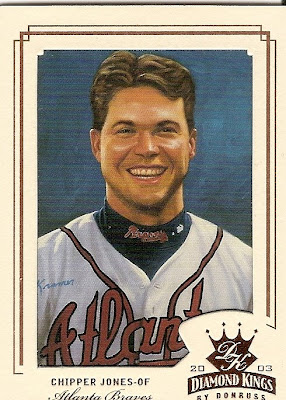 Dayf, if you can help me out here, this card will be included in the pile of cards I'm accumulating to send you. If anyone else beats Dayf to the punch and ID's this card first...too bad, it's going to Dayf anyway. If nobody ID's it, it's still going to Dayf. Then it will be his problem. See?! I can't lose.

By the way, I'm on pace to get some packages out before the end of the year. Two years at the most. Probably

One last thing. The guy who painted these cards is named Dave Kramer. I have an uncle Dave. I don't think it's the same guy. It is cool that my name is signed on the card, though.
Posted by Motherscratcher at 10:53 AM

This is a framed parallel from Diamond kings. I think that year they had these which were common and a black frame parallel that was serial numbered. Donruss did a lot of stuff with the frames on their Diamond Kings cards and I think on their last set there were different serial number rarities depending on frame, no frame, color of frame and foil stamp. It's all very confusing.

I've got some cards set aside for you too, It's just going to be a while before I get my act together enough to send 'em. I don't knwo what my problem is, the envelope is already addressed and everything!

Thanks Dayf, the best I can tell is that it's a bronze foil. I could be wrong, that's just the description that fits best on the beckett site.

I guess it doesn't really matter does it?