Three Hours And A Cloud Of Dust

I can’t believe how long I’ve been gone. I’ve kept up with a lot of blogs while I’m at work, I just can’t really post from there. The plan was to start posting again after all of the craziness of the holidays had subsided. Now, all of a sudden, it’s the middle of January.

Actually, I have a really good excuse. I’ve been in a medically induced coma, brought on by a sort of commercial induced hysteria, since the 3rd quarter of the Fiesta Bowl. As a lot of you know, I’m a big fan of college football and the Ohio State Buckeyes in particular. This season I watched as many bowl games as possible. Sports is the best thing to watch with a new kid because you can enjoy them even while a baby is screaming in your ear for no apparent reason. So, I’m there watching the Fiesta Bowl toward the end of bowl season and somewhere in the middle of the 3rd quarter it all goes black.

Apparently I started ranting and raving about having to immediately go out and buy a Dodge Ram truck. According to Dr Rosenrosen, it was some sort of primal urge over which I had no control. He’s treated 23 similar cases this bowl season. It’s as if I had been brainwashed, Zoolander style, by repeated viewings of testosterone fueled manly men in their new trucks (with the side compartment that conveniently stores fishing gear) driving through some sort of flaming post apocalyptic garbage dump while trying to avoid some other pickups of unknown make that are, for some reason, swinging back and forth on chains descended from huge cranes. It’s like some sort of nightmare from which there was no escape and was repeatedly beaten into my head after every change of possession for the entire bowl season. 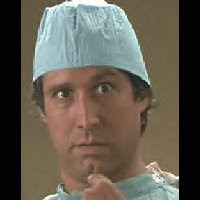 Well, eventually I snapped. Frankly I’m surprised that more people didn’t. I’ve been told that I kept yelling “AHHH YEAHHH!” and “THIS IS HOW I ROLL!!” because, you know, that’s what real men do. They drive Dodge Rams through garbage dumps and yell such things. (Actually, I’m just guessing it was a dump. It could just as easily have been Pittsburgh) Then I would blabber on about how someone needs to drop 2 tons of rocks from about 3-4 stories up into the bed of my new truck because if a truck can’t handle that, then who the hell needs it? Right? People do that type of thing with their trucks all of the time.

Anyway, after about ten days of intense psychotherapy and hypnosis, my insurance coverage maxed out and Dr Rosenpenis assured me that I’m cured. Nobody will tell me who won the game, though.

Another reason posting has been sparse is Grady.

Basically, time has ceased to have any meaning. Life is now a sequence of never-ending 3 hour increments. Grady lives like Woody coaches. Put your head down, plow straight ahead, repeat.

Born 3 months ago, Grady is now about 5 weeks corrected age. He’s finally over 7 pounds and doing well. He’s still hooked up to a home monitor that blares if he doesn’t breath for 20 seconds, or if he pulls one of the leads off. Unless you live in Australia, you may have heard it.

I’m beginning to think that the kid is a bit of a narcissist. He cries when he wants to be picked up (which is always) and he demands to be fed every 3 hours (just like his old man). He has absolutely no regard for my baseball cards and blogging. In fact, he doesn’t seem to care what anyone else thinks about anything. This is leaving me very little time as of now, so those of you checking the blog hourly to see who the next player with the double ear flap will be may have to wait a little while longer. I am planning to post MUCH more frequently, though. I’m just not foolish enough to promise anything.

I think he’s going to like baseball as he seems to like games in general. His two favorite games right now are:

1. Feed me right now just kidding get that bottle out of my mouth no really feed me just kidding.


At such a young age he’s already mastered both of these games. I play them with him every day and I don’t seem to be getting any better.

So, this post is basically an update. After this I’ll continue on posting stupid things about baseball cards. Until then, I’ll leave you with a few stupid observations I made while watching TV the other day (specifically Independence Day and a commercial). They really have nothing to do with anything.

1. OK, you’re making Independence Day and you have this huge budget and Will Smith is attached. You’ve storyboarded the big spaceships and the buildings blowing up. You’re pretty much guaranteed a blockbuster. So, as a goof, you make a list of who would be the worst, least convincing president possible. Bill Pullman makes that list, doesn’t he? The list is Carrot Top, Macauley Caulkin, Meatloaf, and Bill Pullman, right? And, truth be told, Pullman doesn’t get the call until Meatloaf turns it down. How does something like this happen?

2. Now you have the 1st lady. She’s in a helicopter crash but survives. Miraculously she is saved by the woman who was the only one that decided to hide in a closet that was, for some reason, built into the side of the tunnel. So they’re talking and the single mom with the huge rack who lives in LA with her military boyfriend tells the 1st lady that she’s a dancer. 1st lady says “Ah, ballet”. Ballet? Are you freakin serious 1st lady? Who on the face of this earth immediately thinks “ballet”? Really, I’ll bet everyone reading this either knows a stripper or went to school with someone that became a stripper or something like that. How many of you have ever met a professional ballet dancer? I’m not saying it’s impossible, but it’s a little like meeting someone who tells you that they are a musician and immediately jumping to the conclusion that they probably play base in a Molly Hatchet tribute band. It’s just so unlikely.

3. OK, one more. This is already way too long and purposeless. What’s with the guys from the flomax commercial? Are these guys the worst friends ever? They’re out fishing and one of them lands a big one but nobody is willing to wait 1 minute for Larry to get out of the bathroom so he can be in the picture too? And they keep doing it. Everywhere they go they absolutely refuse to wait. Do these guys even like each other? Seriously, what a bunch of assholes. So, I guess they’re saying that if you use flomax on your geezer cross country road trip with your asshole buddies there is less chance of being left out of the picture.

I guess that about does it for now. Future posts:
1. Reviews of more cards from Tribecards
2. Appreciation post for I Am Joe Collector and the brick of cards he sent me
3. Post on the cards I got from White Sox Cards for winning a trivia contest
4. A post about THE OSU that I promised Jeff a long time ago
5. A new set I’m working on if I can figure out how to photoshop cards like Steve at Whitesox does.
6. More random stupidity. Much, much more.

Posted by Motherscratcher at 12:01 AM

Wow, that's a lot of info! Glad to see you have some spare time to blog.

I never saw Independence Day like that before, but now I do!

Ending on a Fez line... genius.

Agree about the casting of Bill Pullman in that movie. In fact, any time that movie is viewed, dozens of questions arise per minute on average..

Great post, enjoyed it immensely. You're a good man...and thorough.

But ripping on Pullman? Come on! His performance in the film was second only to that of a one Randy Quaid. Both were incredibly snubbed by the Academy.

I thought it was dumb to have the first lady survive the crash and then kill her off in the hospital. wut up wit dat!?

I should have copied your posts title for the one I did on my trip to the oral surgeon! LOL!!

Thanks for all of the comments everyone! As far ID goes, I tried to think of things that people may not have noticed too much before (as apposed to the alien computers being windows compatable or that a metal structure 1/4 the size of the moon being completely obliterated by one bomb)

David - I always thought that was pretty dumb myself. I thought that, since she was dying from internal bleeding, someone would, you know, maybe try to stop it or something. That's just me though.

Dubbs, great to hear from you again buddy. I've been keeping up with your blog since you returned.

Also, I hope that I'm not giving off the impression that I don't like Independence Day. I love that ridiculous movie.