One more installment of the cards that I got from David at Indians Baseball Cards. Always. 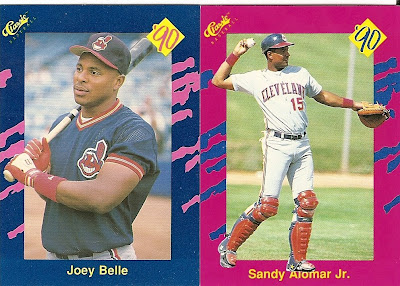 “That doesn’t make any damn sense” you say? Well, maybe it makes so much sense I just blew your mind.

OK here’s another one. Only this time it isn’t pink. Basically, I got the manly equivalent of my imaginary 8th grade girlfriend’s Tapper Keeper for myself and pasted a pre Albert photo of Belle onto it. The only flaw in this whole thing is that I was in 8th grade in 1988, not 1990. But, it’s not like anyone really gives a crap, am I right?

I just wanted to mention that this set has a blank space on the back of each card marked “Autograph”. I guess you’re supposed to stand outside the player’s parking lot after the games in order to get the players to sign in the space provided…on the back…right where everyone wants their autographs. I find this idea strangely awesome.

This means that at some point there was a meeting where they decided to put this space on the back. It was heralded as a great idea. It must have been pretty close to 5 o’clock on a Friday. I wonder how many enterprising young collectors had their 1990 Classic set ruined when a callous player signed on the front of the card instead of the clearly marked space provided? 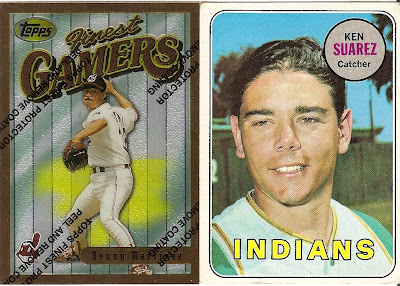 45. Dennis Martinez – 1996 Topps Finest
This is the second Finest card in the bunch and it also has some crazy clear protective coating that must be peeled off. Only it isn’t peeled off. There must be a reason. I break out in cold sweats thinking of all of the terrible things that could happen if peeled back this layer. Good God Man! What if it got a scratch?
Hell no, I’m not going to peel off that coating. In fact, I’m going to look into a way to apply a protective coating to all of my existing cards. And it sure as heck isn’t going to be clear either. It’s going to be all black to keep out the suns harmful rays. Seriously, what if I have a card that needs to be transported some day? What the heck do I do then. Just move it in a penny sleeve and possibly a top loader? What, are you out of your frickin’ mind?
I’m not sure I’ll be able to sleep until I figure out a way to add a black protective coating to all of my cards. I could use post-it notes to keep track of what the cards actually are. Then they’d be safe.
There’s no telling how many 1988 Score cards I’ve ruined already. Somebody needs to do something. 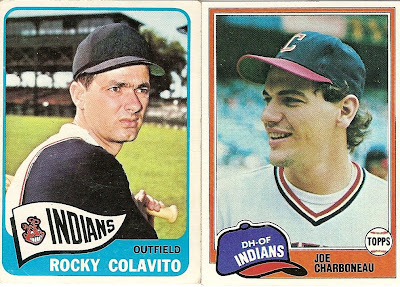 46. Joe Charboneau – 1981 Topps
So we trade Colavito, we had to get someone great, right? Try Harvey Kuenn on for size. That’s right, they traded one of the most popular (to this day) players in franchise history for some freakin’ slappy with no power AND no speed. Well, they hang on to the immortal Kuenn for one year and trade him for Johnny Antonelli and Willie Kirkland.
That’s right it turned out to be Colavito for Antonelli, Kirkland, and one year of Mark Grudzielanek’s step dad. Harvey Kuenn’s baseball reference page is still available for sponsorship, if anyone is interested.
The back of the card, like twisting a dagger, informs us that Rocky hit 4 HR’s in one game in 1959.
Go Tribe. 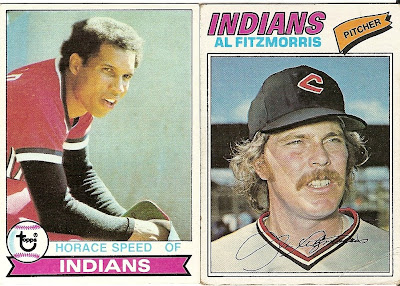 49. Al Fitzmorris – 1977 Topps
Al Fitzmorris had spent his entire 8 year career with the Royals before he was suddenly and rudely plucked from his obscure comfort by the Blue Jays in the 76 expansion draft. The Blue Jays got one look at Al and shipped him off to the Tribe before he ever appeared in one of their uniforms. Seems that a team that barely existed had little use for Al. The Tribe was happy to have him, though, as they sent 2 players for compensation.
My theory about this card is that they never told him who he was traded to. They just handed him a hat and then a mirror. The picture on this card was taken at the exact moment that Al Fitzmorris learned his major league fate. He didn’t last long after that.
Weep not for Al Fitzmorris. The back of my card tells me that Al threw a 2 hitter against the Twins in August of 1975. Seems that even though Al ended up in Cleveland, he had had his day in the sun. 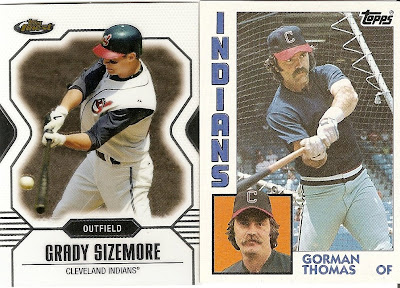 50. Gorman Thomas – 1984 Topps
I had forgotten about the Gorman Thomas era in Cleveland. He was only in Cleveland for a little more than half a season (OPSing a stellar .726), but remnants of his glorious mustache live on to this very day.
In all reality, Mr Gorman’s greatest contribution was not on the field. OnJune 6 1983, Gorman was sent along with Jamie Easterly and one Ernie Camacho in exchange for the Tribe’s Rockin Ricks…Manning and Waits. Does this deal get done without Gorman Thomas? Better yet, does Cleveland welcome Big Ern into the wigwam if Gorman isn’t sporting a marmot on his upper lip? The world will never know.
What I do know is this; the Gods were smiling on Cleveland that magical June day.

51. Grady Sizemore – 2007 Topps Finest
Of course there were some Grady Sizemore cards in this lot. This is one of the best and seams like the a great card to end this review on. Ending a review on Sizemore is like leaving the ballpark on a warm night after you just saw your team sweep a double header from the Yankees. Life doesn’t get much better.

Thus ends the latest review of the great cards that David sent me, until I can somehow finagle my way into more free stuff.

Posted by Motherscratcher at 4:52 PM

I think the card hobby as we know it died when they started applying protective coating to cards. That stuff gums up your bicycle spokes!

I love these posts - hilarious! As for the coating, I once saw an article (and I wish I could remember where) on the effects of the 'protective' coating. In the end, the author stated something like: No one knows for sure if the protective coating will actually protect the cards 50, 75, 100 years from now. Wow. Pure-D Genius.

I have a 45rpm copy of ' Go Joe Charboneau Go " in my Super Joe collection , although I don't have anything to play it on !!!

Would you be willing to part with that Fitzmorris card? Email me if you might.