This post is in honor of my triumphant Rose Bowl win. Well, not really my win. All I did was sit on my couch and hope like hell that the Buckeyes didn't get embarrassed again. So I sat there drinking beer and eating junk food and tried to keep my ulcer in check.
On top of it I had the now famous Rose Bowl Bet with Joe Collector. The bet was for a box of cards of the losers choosing. A few days (weeks?) ago my prize (which I had forgotten about) was revealed. I can only assume that all of you were stricken mute (or even catatonic) with jealously due to the fact that none of you even bothered to comment on my awesome prize. (Yeah, but I noticed damn near 40 of you left a comment to get a free set of 2008 Masterpieces.)
2010 Topps Chrome is the prize. Yes, Stusigpi knows what I like. Awesome. I'm not sure if he knew of my love for Chrome from my blog and the numerous questions and advice that I'd asked him about the product, or if he figured that since I was from Ohio I probably liked shiny things. Probably a bit of both.
Well, since you know that Chrome isn't due out for a few months or more, I decided to bust one of the boxes I have left of 2009 Chrome. (Coincidently I bought 3 boxes from Blowout through a sale on I Am Joe Collector).
Here is what transpired: 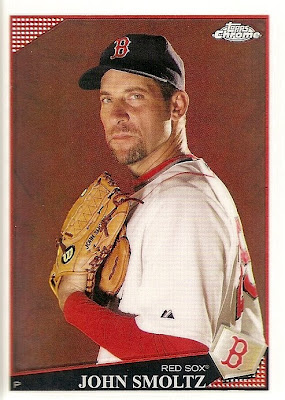 John Smoltz Base
I wasn't going to scan a base card, until I saw this one. This card just looks awesome with the red background and all. I'm not a fan of Smoltz. Nothing against him. He was great. I just never cared about him much one way or the other.
But this card looks great. So there it is. 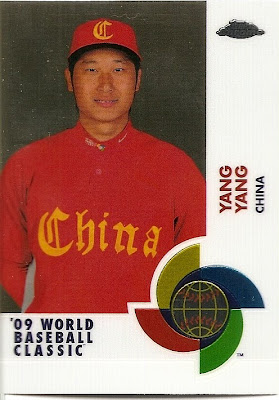 Yang Yang WBC
If you think I scanned this card for any reason other than the dude's name is Yang Yang, you haven't read me very much. Not that I'd blame you.
For the record (as if anyone cared about such things as my "record"), I went to high school with a guy named Ken Kenny. I also was in college a few years behind some dude named John John John. I didn't type that wrong. John John John. John cubed for short. I didn't know him personally. But I don't know Yang Yang personally either. That doesn't prevent me from enjoying his name. 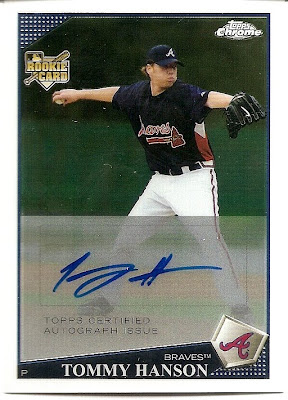 Tommy Hanson Auto
I didn't know any of those MmmBop kids played ball. Far out.
(Yes, I'm aware of how lame that joke was. What the hell else am I supposed to say about Tommy Hanson?) 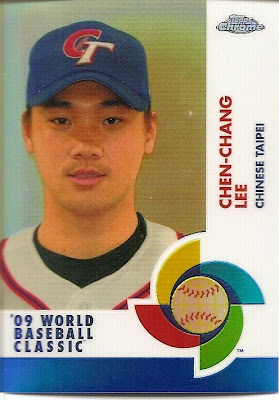 Chen-Chang Lee WBC Blue Refractor 009/199
Not as interesting as Yang Yang. But it is a blue refractor, so that's nice. I'm also excitted that they put the 00 in front of the 9. I don't know why.
I also like that 199 is divisible by 9. That's exciting too. 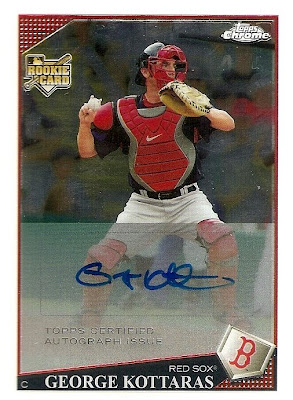 George Kottaras Auto
This dude is apparently Wakefield's personal catcher or something. Of course that may be completely wrong, but that's how the back of the card makes it sound. I'm not going to look it up. That's George's big claim to fame according to Topps. He can catch a knuckleball without retiring the way some other nameless catcher did.
(let's see if that earlier math thing generates any comments) 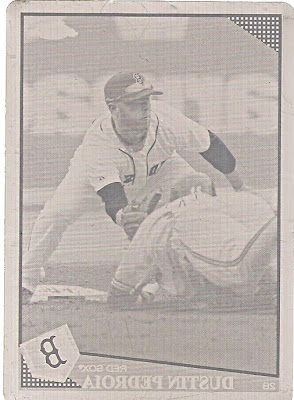 Dustin Pedroia Magenta Printing Plate 1/1
Cool. I guess. I was super excited to get a Sizemore printing plate in one of Joe Collector's breaks (it was actually traded to me). I'm still excited to have it. But I have a few of these now and they really aren't that cool. Not sure what the appeal is, other than that they have 1/1 written on them, as if that's a big deal any more.
Still, better than a base card, though. 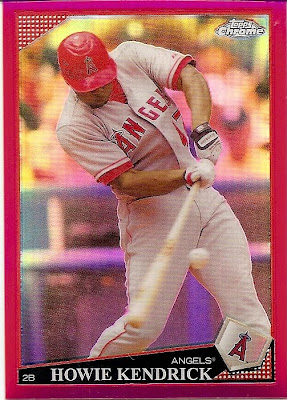 Howie Kendrick Red Refractor 16/25
Now, this is cool. Almost as cool as if they had called it a scarlet refractor instead of red. Either way it looks awesome. Especially after Topps screwed me out of a Red Refractor redemption in 1009 Finest (or maybe not). I was really excited to pull the red one. Kendrick is not bad either.
His name is Howie. So you know I like that.
Still one box to open and a shiny new 2010 box down the road, the spoils of war. Or at least the spoils of two middle aged white guys with the ability to watch athletic college kids play football on TV.
I thought it was a good box. What do you guys think?
Posted by Motherscratcher at 4:40 PM

As the resident math prof, I was going to call you out on your algebra. Or, if you were my student, I'd draw a line through it and write illegal.

(and you got my comment, not the guy giving away a free set of Masterpieces, feel honored.)

so Charles Epps you're not....

this just in, Tommy Hanson has cured cancer...

if you're interested in trading it, hit me up with your ransom demands.

So you are giving away a set of Masterpieces?

Um what? Dude, stop huffing the nitrous on the job.

Anyway, as soon as the new chrome makes its debut, you shall expect it on your doorstep. Nice box by the way.

WV: Weadpzj. Maybe that the WV is trying to tell me its not the Nitrous you are huffing its the wead you be smokin'

Can't it be both? Why do you think I've slowed down to 2 posts a month?

Beardy - I just realized that I still haven't added your new blog. For that I have no excuse. I will rectify it directly

Play at the Plate said...

I love Chrome. Shiny IS good. I wish I had a box of Chrome to bust every time Charles Epps said algorithm.

Don't feel too bad. I also won a stash of cards on a Rose Bowl bet.The only comment I got on the post was from the loser, Madding !!And I even mentioned your name !!! lol
http://baseballdad-mytribeblog.blogspot.com/2010/01/o-h-i-o-thank-you-osu.html

Yeah, I'm with "boxy" there above this comment. I think that means it was a good box.

I went to college with a guy who a yearbook that had a girl whose name was Anita Dickman. Seriously. What friggin cruel parents.

I also used to work with a woman named Anna that married a Mr. Graham. Really, why would you do that to yourself?

No time to comment... I'm too busy workin on my rap skillz.

I will throw you a trump card for that Pedroia