I was feeling like opening something the other day. I've had this box of 2003 Stadium Club laying around for over a year. It promised me a relic card. The cards are nice and glossy. It seemed like the right time. 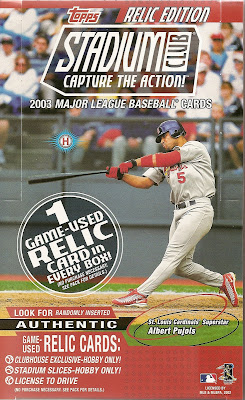 Here is the cover. It damn near promises you Pujols relic. And I've never seen a box that says "Relic Edition!" before. This must be some special super duper relic I'm in store for. I know relics are a dime a dozen now, but I have a feeling that this box was a huge deal way back in 2003. I don't know. I wasn't there.
Well, that's not true. I was alive and everything. I just wasn't actively collecting cards.
My point is I have a feeling (wrong probably, but there it is) that this box was pretty cool 7 years ago, and I think it looks pretty cool now. I like Stadium Club. And I can't wait to see my relic.
I'll bet it's a Pujols. I just have that feeling. 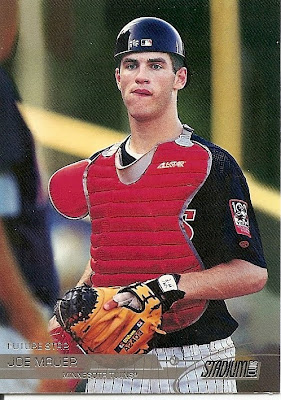 Joe Mauer Future Star
Let's start with a few base cards to build the tension. Can't complain about a Mauer card under any circumstances. This one says "Future Star" on it. Those Topps guys really do their homework. I mean, how the hell did they know that?
One card closer to my awesome relic! 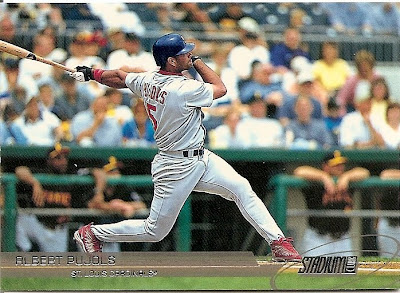 Albert Pujols
Now I'm getting giddy. It's almost impossible for me not to pull a Pujols relic now. It's a foregone conclusion. And this card is sweet. Perfect swing. A much better photo than all of the 2009 Topps Pujols cards where he's dragging his sack across the basepath.
We inch a little closer to my spectacular relic pull. 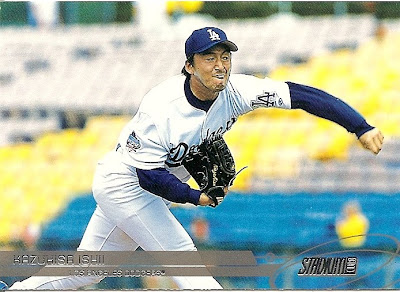 Kaz Ishii
No reason to show this card other than Kaz's face. But that was reason enough.
3 cards closer to the relic! 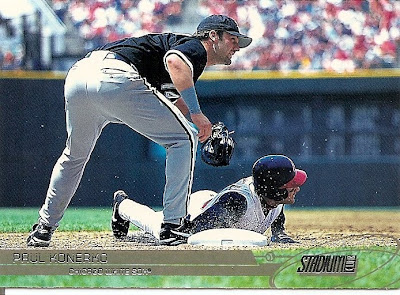 Paul Konerko's Ass
If Paul ever saw this card he probably had a reaction very similar to President Skroob after Snotty beamed him in Spaceballs.
We are now 1 Paul Konerko's huge ass closer to the relic. 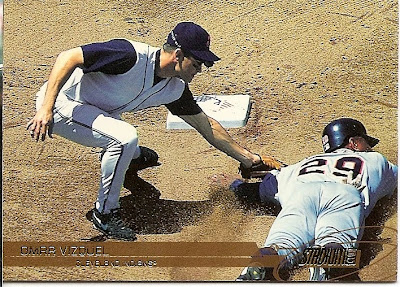 Omar Vizquel Royal Gold
This is the Royal Gold version. These cards came one to a pack. They have gold writing instead of silver and they are twice as thick as the base cards. This is one of only 2 Indians cards I pulled in the whole box, the other being Thome.
I did however pull 4 Jacque Jones's...which sucked. But hey, Pujols doesn't hit a home run every time, am I right?
And we're 4 Jacque Jones cards closer to my Pujols Relic 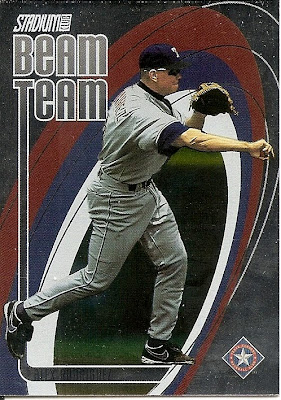 Alex Rodriguez Beam Team
I don't know what a beam team is. Maybe they have all been beamed up by Snotty? It has some kind of ellipse inspired design for some reason. I don't know. What I do know is that the back of the card reads: "A-Rod's immense talent and charismatic personality make him a pop culture icon to sports fans..."
And we are one "A-Rod's charismatic personality" induced laughing fit that lasted approximately 2 minutes closer to my relic. 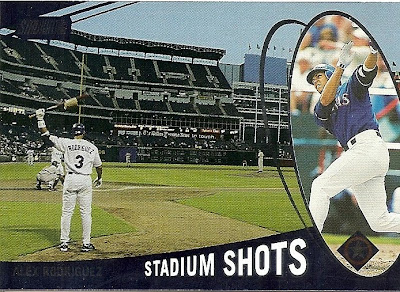 Alex Rodriguez Stadium Shots
If it was me, and I was designing the Stadium Shots insert set, I would have done a few things.
1. Bag the ellipses. What the hell's going on with the ellipses?
2. Try to get a shot of a stadium with, you know, people in it. Seriously, this is the best they could do?
We are 1 empty stadium closer to my relic 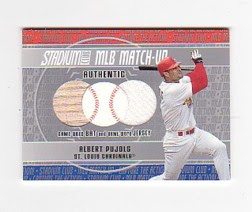 AND HERE WE ARE!!!!!
Albert Pujols Dual Relic!!
"I knew it! I knew I'd get a Pujols! this is my best Stadium Club pull ever! A dual relic! Can you imagine! What a happy day! What. A. Happy Day!!!"
- is what I would be saying if I had pulled this card instead of downloaded it off Beckett. This joke would have worked better if the Beckett download looked anything at all like my scans.
Whatever
I would have been very happy to pull Pujols, or any number of other good players. But I didn't. I would have been satisfied to just pull any relic at all.
But I didn't.
That's right. My box of 2003 Stadium Club Relic Edition didn't have a damn relic in it. I'm not crazy. It says "1 GAME-USED RELIC CARD in EVERY BOX!" It's right there in all caps. It even has an exclamation point to make sure that you know exactly how awesomely relicy the relic will be. And I didn't even get one.
Heck, I would have taken Sean Burroughs. I wouldn't have been doing cartwheels but at least it would have been something, right? OK, maybe not Sean Burroughs, but you know what I mean.
How can a product advertise 1 stinkin hit and then not even have one in there? Bummer, man. This is a bummer.
So, what was the big hit of the box? 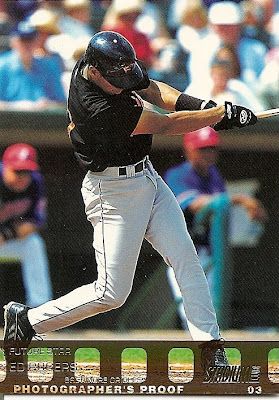 Ed Rogers Photographers Proof 201/299
Ed Rogers? Future Star Ed Rogers? You've got to be shitting me Pvt Pyle!
What a bunch of bullshit.
Posted by Motherscratcher at 9:47 AM

time to package up all the wrappers and the box and a copy of this post and send itoff to Topps.

maybe along with a crap burger...

That is a nice set though.

On a side note, my blog www.canadacardworldblog.com has been nominated for the Upper Deck Blog Awards. If you're interested in some free hockey cards, please visit our site, follow the simple rules, and maybe we both can win!

hey man. looks like the tribe is open in jc's group break. time to put the plan into action!

Loved the Spaceballs references. You certainly got Skroobed...

That's not fair! What a let down for you after having that box around so long.