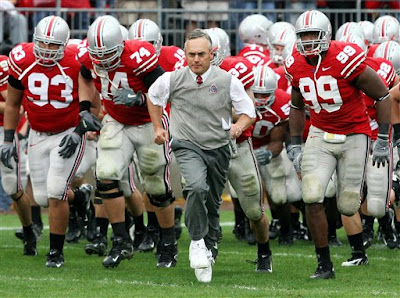 There was nothing about what the Buckeyes had accomplished this season that led me to believe that they would be able to beat Michigan State. Yesterday they made a believer out of me again. There's no real need for me to recap what happened as anyone who cares already knows. What I would like to do is just point out a few things about Terrelle Pryor. 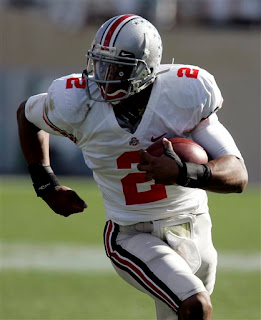 1. Terrelle Pryor is an incredible athlete. He's very fluid. His throwing motion looks a little funny, but hopefully the coaches will work that out with time. A lot of people are comparing him to Vince Young, and I thing that's a fair comparison. But, when he runs, he reminds me of another runner. A guy who I had the privilege of watching in high school and is also one of the best RBs ever at Ohio State and in the NFL. Robert Smith. I'm not trying to imply that Pryor is as good as Robert Smith was. I'm just saying that he's who I think of when Pryor is running. They both have those long strides that make it look like they aren't running very fast at all. It's really beautiful to watch. Let's hope that Pryor ends up being at least half the football player and person that Robert Smith turned out to be.
2. Terrelle Pryor desperately needs a nickname. Usually I'm against the arbitrary assigning of nicknames as I believe the best ones are not forced, but come about naturally. However, Pryor was referred to today in the Cleveland Plain Dealer as "T.P." I don't know about you, but when I hear T.P. I think of toilet paper. We obviously need something better before that one sticks.
I fear that if we leave it up to ESPN he will end up being something like "T. Prod". I've shown my significant ineptitude in this department already. I keep coming back to Skippy McGillicutty. Obviously, I don't have the answer. Let me know what you think reader, man, sir.
This is your new homework Larry.

Posted by Motherscratcher at 4:13 PM

Not sure you got our email...would you mind sending your PO box or address to us? (Patricia & Lucy) at nmboxer@yahoo dot etcetera.

That's great. Aren't the Blog People fantastic? I just checked my email and sent a reply.