A package from Cardboard Junkie

About a month ago Dayf, over at Cardboard Junkie, sent me a package. He did this for no other reason than I commented that I was a fan of Dan Gable. Because Dayf (which I have recently learned is nihilist for “Dave”) is good dude, he sent me a few Gable cards and a bunch of Indians. Aren’t the Blog People great?

Well, it only took a month, but I’m finally getting a thank you up on my blog. Here are some scans of Dayf’s package and a few thoughts on it. (Go back and read that last sentence again!) 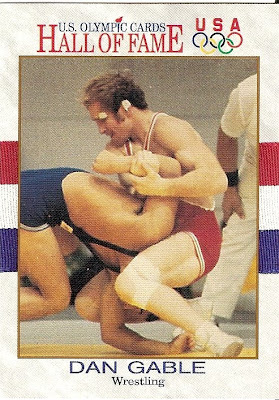 1. 1991 Impel US Olympic Hall Of Fame Dan Gable #32
I have no idea what set this is, but it is a sweet card. I was a wrestler for 6 years and was pretty average. I didn’t have the proper mindset. I’d get so nervous for matches that I would almost puke. I think it’s safe to say that Gable had no such problems. Here are a few stats on Gable:
· 64 – 0 in High School
· 118 – 1 at Iowa State. The only match he ever lost was his last one, in the NCAA final, to Larry Owings of Washington, who somehow managed to psyche out Gable.
· 1972 Olympic Gold Medalist, without surrendering a point
· Won 21 straight Big ten titles as head coach at Iowa
· Won 9 straight NCAA championships at Iowa
Yes, Dan Gable was a super bad ass extraordinaire. I remember hearing a story about a Russian wrestler quiting in the middle of a match against him. We’re not talking about some 7 year old kid who’s dad is forcing him to wrestle. We’re talking about a guy who’s good enough to wrestle on the international stage. And the guy freakin’ quit! Anyway, if you don’t know much about him, I would recommend setting your DVR to record ESPN’s “Beyond the Glory” on Gable. The guy is truly amazing.

Back to the card. I don’t know exactly what kind of hold Gable has that poor bastard in, I just know that he’s in a tight spot. Meanwhile, Gable seems to be kicking his ass without breaking much of a sweat, while his face is held together with tape. Total Bad Ass. 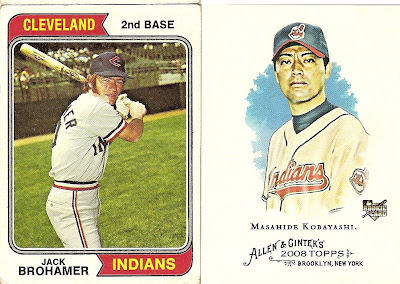 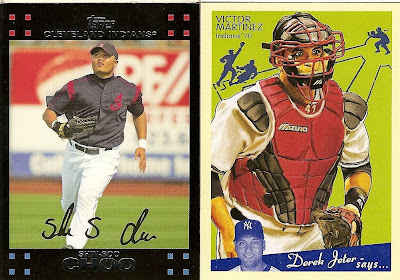 4. 2007 Topps Shin-Soo Choo #343 – One of my favorite current Indians and Grandmaster of the Council On The Double Ear Flap. Not to mention that he’s learning cursive.
5. 2008 Goudey Victor Martinez #61 – I like Goudey. Who doesn’t. Let’s see what Derek Jeter has to say about Victor. “As the Indians rolled to the 2007…” You know what? Fuck what Derek Jeter has to say. He didn’t say it anyway. 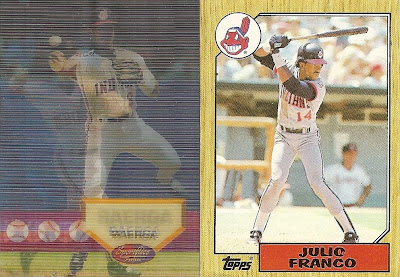 6. 1987 Topps Julio Franco #160 – As kids playing waffle ball, there wasn’t anyone’s batting stance more emulated than Julio’s. The back informs us that Julio was a standout baseball player in high school. No shit? Just once I want to read about the guy that really sucked it up in high school but came on strong once he reached Double A.
7. 1994 Sportflics Carlos Baerga #71 – I absolutely love Sportflics (or Sportflix, depending on the year I think). It was a sad day in Cleveland when Baerga got traded. And for Jeff Kent too. That guy sucks. He’ll never amount to anything. Not to mention the fact that I lost my blow connection. 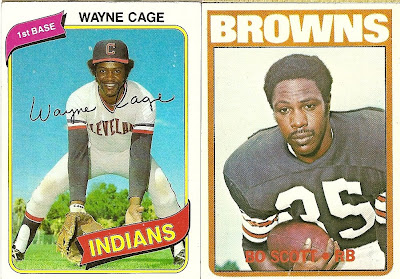 8. 1972 Topps Bo Scott #187 – What strikes me about this card is that it’s only 8 years removed from Cleveland’s last NFL Championship (championship of any kind actually). 8 years isn’t too long. It would be years before we came to the realization that we are a city of losers. We still have no idea how the hell it happened.
9. 1980 Topps Wayne Cage #208 – Do you think he’s really fielding a grounder? 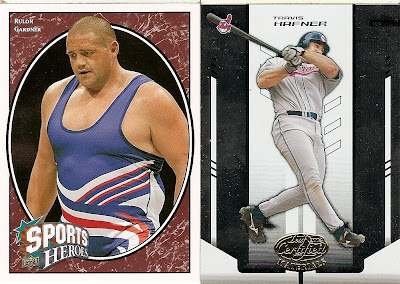 10. 2008 UD Heroes Rulon Gardner #258 - Russia had their own Dan Gable in Alexander Karelin. The only difference is the USA had a guy who eventually beat him. I remember watching that match. Then he was in a plane crash and lost in the wilderness and lost a few toes to frostbite or something. The man’s led a strange life.
11. 2004 Leaf Certified Materials Travis Hafner #191 – Look how shiny it is! I love Hafner and am really pulling for him to turn is around. For some reason I always had an idea that he got that big and strong the same way that Conan did; just pushing a big wheel around for years and years for no apparent reason. 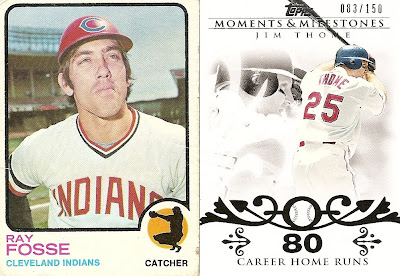 12. 2008 M+M Jim Thome #85 083/150 – Come to think of it, maybe that’s how Thome got that big too. Naw, he just ate a lot of steak, eggs, cornbread, and milk. He hit a hell of a lot of HR’s too. In Cleveland he gets booed because after hitting like 300 hrs for us, someone else gave him many more million dollars to play for their team. HE OWES US! He should play for Cleveland for free forever. Otherwise he’s a jerk.
13. 1973 Topps Ray Fosse #226 – On the back it says: “Ray considers his most interesting baseball experience to be ‘the collision’ at home plate with Pete Rose in the 1970 All-Star Game.” Yeah…I’m sure that’s what he called it…”interesting” 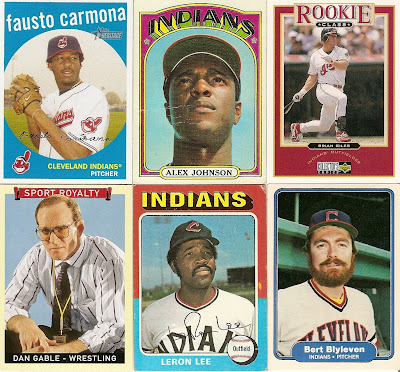 Some thoughts on the rest

I love 1975 Topps. I think everyone does.
I heard that Giles likes to walk around the clubhouse with “Charlie” hanging out.
Will there ever come a time when I get tired of Bert Blyleven’s beard?
Alex Johnson…I got nothin’. Sorry
Dan Gable looks like an accountant. A bad ass accountant who can kill you with his pinky, but an accountant none-the-less. 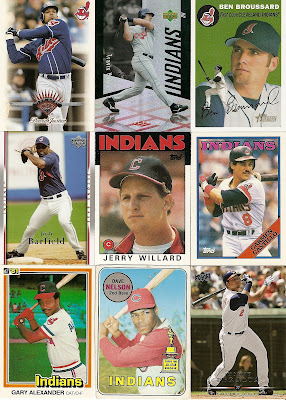 I like Dave Nelson’s sleeveless jersey, but they really do that best in Cinci Now-a-days
I like Peralta at 3rd base for the Tribe. Too bad he plays SS
I can’t believe the 86 Tribe finished 5th with Jerry Willard
Josh Barfield looks good. Why isn’t he?
Thank you Ben. We love Shin-Soo Choo.
Why doesn’t David Justice get more love? I’m just talking about baseball too. He was really good. That isn’t even mentioning the fact that he used to sleep with Halle Berry.

There you have it. I can’t thank Dayf enough for his package (I just love saying that). It really was great. I promise I will get something together soon.

Posted by Motherscratcher at 2:46 PM

Everyone is impressed by my package.