In accordance with what my son’s opinions very well may be, I’ve decided to start a collection of some of his very favorite cards. You might be saying to yourself: “He’s only -6 weeks old. How in the world can you know what he likes? Heck, he might be a Yankees fan.” To which my reply would be: Sure he’s young, but he’s a reasonable kid, and any reasonable kid would love these cards. As far as that crack about the Yankees; I’ll let it slide this time. But, don’t push your luck Buster. 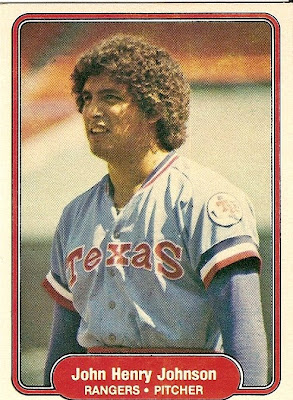 JJ, as we like to call him around the clubhouse, had a pretty unspectacular career, mostly as a relief pitcher. His biggest accomplishment may be that, in spite of his name, he never evolved in to some sort of lone nut ball assassin. To tell you the truth, I’m not sure I had ever heard of him prior to Grady pointing out this card.

So, I want you to look closely at the card to see if you can figure out what’s so great about it. Go ahead, I’ll wait………..give up yet?..........IT”S THE HAIR. Just look at it. It’s glorious. It’s so uniform, symmetric, and geometrical. If there’s a white Bake McBride out there, it’s probably JJ. On some levels I wish he had his hat on in this card, just to see what it would look like. But, I think that might obscure the full glory of this magnificent coiffeur. No, I think this card is perfect just the way it is.

You’d think that the hair would be enough. You’d be wrong. There’s something else wonderful about this card, and it’s a little more difficult to pick out. Rather than try to explain it, I’d like to try a little demonstration, you know, for the kids. C’mon, It’ll be fun.

OK, I want everyone to stand up…you too Gellman.
Dave, pick yourself up off the floor and quit your crying. There’s 4 more games.
Great, I see Patricia and Lucy are on their feet.
Dayf, you’re excused due to your wonderful package.

OK, now just hang your arms down at your sides. Pull your pants all the way up to your elbows, and walk around like that the rest of the day. Good times, right? 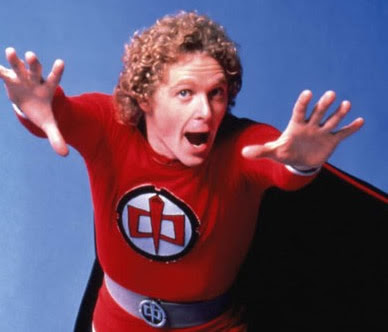 Maybe he would have pitched a little better if his pants were below his belly button. Who knows. What I do know is JJ didn’t supplement his income by working construction. The dude was a superhero! There are a lot worse ways to spend the off season than fighting crime. Hey, maybe that’s why Grady likes this card so much.

Posted by Motherscratcher at 11:26 AM

You have to love a GAH reference! ... I believe people are born good, so there ain't NO way that your son is a Yankee fan.

Another post where I can say LOL has been applied literally.

Are the days of glorious baseball hair completely over?

Our word verification is oxtent.