What, are you kidding me?

We got ourselves a family.

There are a few ways I could do this post. The first way is to make short frequent posts about my kid and what’s happened the last 3 weeks that no one would be interested in because this blog is supposed to be about baseball cards and my incredible lack of knowledge or interesting opinions on that subject. The second way is to try to get the whole thing out of the way right now in one post that no one would read because of the reasons previously stated. This would allow me to get back to the important topics I have recently explored, such as players with metal teeth and those who wear their hat under their helmet. This is the path I will attempt to take.

The most likely scenario, however, is that I will, right now, make a long rambling post about my kid and then fail to abstain from boring you with posts about him in the future. The reason for this is that being a dad, I’m realizing, is really a hell of a thing, and I’m not sure how my brain will work going forward and what I’ll be thinking about. And, what I’m thinking about is pretty much what ends up in my posts. 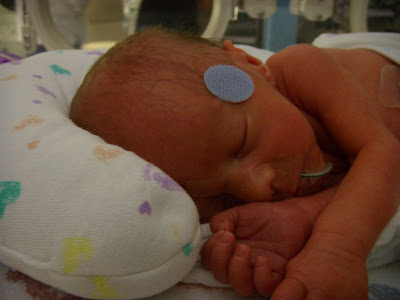 I figured I’d start with a brief timeline of events that led to the existence of Grady Michael Kramer, bad ass mofo and ass-kicker extraordinaire.

Sept. 97 – I meet my future wife in Columbus The Shoe

Jan 03 – OSU wins National Championship
June 03 – I marry my wife in Dayton
Feb or March 08 – My wife becomes pregnant. I am presumably involved.

Sept 19, 2008 – At a yearly checkup at her regular doctor, it is discovered that my wife’s BP is slightly elevated.

Sept 22 – My birthday. My wife’s (Katie) OB sends her to the hospital for a few hours to get hooked up to the monitor. My wife tells me not to bother leaving work. I leave anyway. They decide to keep her overnight “just to be safe”. It may be nothing. It may be a condition called pre-eclampsia that could ultimately end with seizures. This seems like the most likely scenario as the symptoms fit. For some reason none of the doctors will make this definitive diagnosis and there is talk that my wife may be able to go back to work “on a reduced schedule” as if such a thing exists for her.

Sept 23 – The high risk OB does an ultrasound. The kid looks good. My wife asks if it is pre-eclampsia. Doc looks at her like she has a banana sticking out of Banana her ear. “Of course it’s pre-eclampsia. Hasn’t anyone told you that yet?” It’s the basic “If it looks like a duck and quacks like a duck…” speech. IF she is allowed to leave the hospital she will be on bed rest until delivery, which is supposed to be in 11 short weeks. She will only be allowed to leave if they can get her BP under control. They give her a shot of steroids to help the baby’s lung development. No mention of the effect it will have on her average or power numbers. 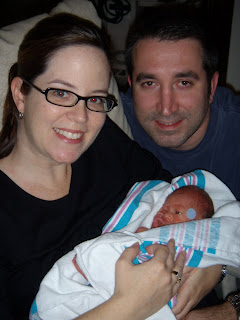 Sept 25 – Things are becoming routine and boring at the hospital. BP is still high. It is decided that I will go home to get some stuff done (bills, clean, cut grass, etc) and return the next afternoon.
Sept 26 6:00 AM – I get this call from my wife: (heavy breathing, not the good kind) “I feel terrible. My BP is 185/115. OK, I’m going to go now.” I somehow make it to the hospital without being pulled over. They are probably going to deliver. But, at about 8:00 PM the docs decide to hold off. This same scenario repeats itself every few days. 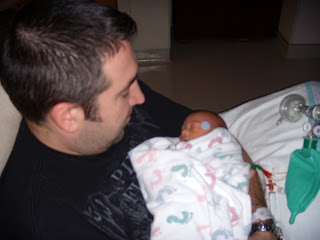 Grady arrives pissed off and screaming. I take this as a good sign. They hold him up for us to see. We were told to expect him to be about 3 lb. He’s 3 lb 2 oz. I had no idea what 3 lbs worth of baby would look like but there’s more of him than I expected. I even get to hold him for the shortest 5 seconds of my life. Then it’s off to the NICU, his home for the next 6 – 8 weeks.
What follows is a muddled mess of tubes, beeps, dings, nurses, doctors, biliruben lights, hiccups, flowers, visitors, phone calls, pumps, lactation consultants, trips back and forth to the hospital, pictures, fast food, and very little time to ourselves. I can’t believe that it’s already been 2 weeks.

As for my wife, she is doing great. She was released looking like a cabbage patch kid and promptly lost an astounding 24 lbs over a 3 day stretch last week. She looks awesome and, as far as I can tell, is the most natural mother in the world. 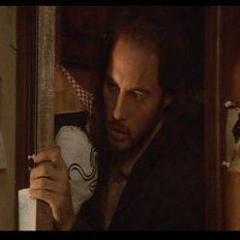 As for Grady, he’s doing well. Breathing on his own in room air. He still has a tube snaked down his throat to feed him, but that will take a little longer. He’s growing. I have my suspicions that he is the greatest kid ever born. Well, at least in the 90th percentile. He’s definitely cool. The chicks already dig him, so he’s got that going for him, which is nice.

That brings us up to date. That’s about as condensed as I can make it. I thank anyone who bothered to read the whole thing.

The end of this post brings me to the realization that there’s no way in hell I’ll be able to keep my promise made at the beginning of the post. I apologize in advance for the future posts about my new family, but I can already think of a bunch of stuff I left out and feel like I have to get down in writing.
Hopefully posts in the future will be more entertaining and eventually gravitate back into the realm of sports and sports cards. My goal is at least a post a day from now on. Sorry I’ve been away so long. Things have been kind of weird around here.

Posted by Motherscratcher at 5:07 PM

This is part of being a dad in the Web 2.0 world! Embrace the merging of your two worlds!! :-) Congrats!!

Either way, I hope everything works out for you.

Glad things are going well. Hope they stay good. My wife is due Dec 24th.
I noticed Juan Pierre running around on the bases with his hat under his batting helmet and thought of your blog.

Congratulations. No need to apologize. If I had a blog when my daughter was born, I'd do the exact same thing.

AWESOME!! Congrats, Mike!! From one father to another, get ready for the most heartwrenchingly wonderful experience on the planet.

From one blogger to another, don't bother apologizing. Writing posts like this one have put my site on the map!

Man, I'm so happy for you guys! Good job!

I'll expect to see a "it's my kid's birthday send him some free stuff" post from you in about 5 years...hahahaha...

Wow - congratulations! This was a great post and I'm glad you shared it.

1. Are you an Ohio State fan and/or alumnus?

2. Did you name him after Grady Sizemore?

3. If you did name him after Sizemore, how did you manage to convince your wife to name him after a baseball player? I'll need some advice when I try to suggest naming my future son Rocco in a couple of years :)

Best of luck with fatherhood!

Thanks to everyone for the congratulations. Expect a lot of dumb comments on your blogs as I catch up on all of the posts that I missed.

Dave - Yes, my wife and I are both graduates of Ohio State. It's impossible not to become a little fanatical about the whole thing.

About the name. As you were writing this comment I was working on a post on this very subject. It should be up now.

Basically what you need to do is convince your wife that Rocco is her idea and act a little leary about it. Then reluctantly agree. Best of luck. You may have better luck with Evan.

Buckeyes and a baby! Awesome! Congratulations on the new arrival. :o)