These cards are part of a thank you package from Connor at Treasure Never Buried for his birthday gift. I sent him a smorgasbord (don’t you just love that word?) of packs of cards and he sent me these awesome cards in return. It looked like he had a great birthday. I know I really am enjoying my cards. Here’s what I got: 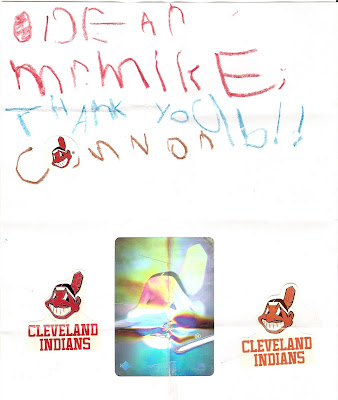 First is this hand signed, personalized note. Judging by all of the Indians stickers and all of the shininess, Connor really knows what I like! 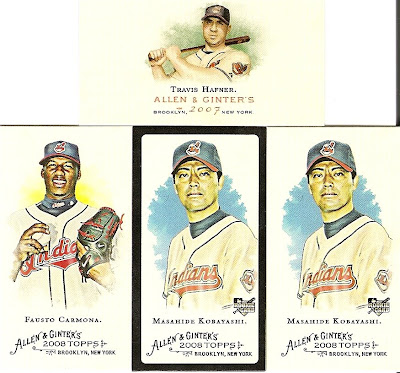 I love the Allen and Ginter cards. I’ve been contemplating putting together a set of the. Getting these cards may make that decision a little easier for me. Maybe I’ll try a set of all Black Parallels. I think that would be pretty cool

Paul Sorrento 1993 Leaf
I like these Leaf cards. The backs feature the player over some sort of majestic landscape. Paul is superimposed over the majestic city of Cleveland and it’s Terminal Tower. Of course I didn’t scan the back. That would have involved forethought and planning.

Hafner 2008 A+G State of North Dakota
Apparently the Allen and Ginter set included all of the states and players from that state. It’s a pretty cool idea. I wonder who made the cut from Ohio? I think Hafner is a great choice to represent North Dakota. I know I’d be proud to have him. Then again, when it comes to North Dakota, the pickin’s are probably pretty slim.

Julian Tavarez 1994 Pinnacle
One thing I’ve noticed about Pinnacle and this set in particular is the photography is great. That’s usually a good thing. I’m not sure it is with Julian. Don’t get me wrong, this is a great action shot. It’s just that Julian has…how can I put this…an unfortunate countenance.

I’m not much for research. If I don’t know something, I usually just make it up. I try to let you know when I’m doing this. Unfortunately, this leads me to write things that are less than accurate. For example, it wasn’t too long ago that I referred to Brad Komminsk (on this very blog) as a “decent player”. Oh well, Reggie Jackson don’t hit a home run every time, right?

I bring this up because I’d like to find out if Tavarez ever faced off against Otis Nixon. I have no idea if this ever happened, but my contention is, if it did there was probably some sort of eclipse or earthquake that day. The amount of ugly involved in that matchup would be nothing short of biblical. Since I don’t know where to go to find out if this happened, I’m just going to assume that it did. So, basically:

Remember when Julian Tavarez faced Otis Nixon? The ground shook and they sky turned to black. Yes, God was angry that day, my friends.

I love Hafner. What I don’t understand here, is how he ends up in a Future Stars set in 2006, his fifth year in the league. In 2005, before this card was printed, he ended up fifth in the MVP voting. Future Star? I guess. Hafner had another great season in 2006 and he’s been on the decline ever since. I think 2009 is his comeback year.

I think you all know how I feel about Sizemore. The Ultra is awesome. I never saw an Ultra set I didn’t like

I also like the fact that Sizemore became a Future Star a year after getting 185 hits, 22HR, 22SB and appearing in 158 games. Look for Evan Longoria, Ryan Braun, and Albert Pujols in the 2009 Future Stars set. Actually, this set has an awesome checklist and I may add it to the sets that I’d like to put together. At the very least I think I’ll keep my eyes open for a box to break!

Daffy Duck – 1990 Upper Deck
I’m not sure if this is part of the regular set or if it is some separate Looney Tunes set. How Daffy became a Mariner, I’m not sure. There is nothing on Baseball Reference about that transaction. The card is great and I’d like to see more of what’s out there. I love all of the Looney Tunes characters. I’m glad to see JV bringing the love for these characters to a new generation. 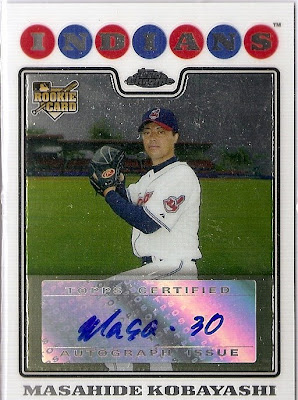 Masa Kobayashi – 2008 Topps Chrome Auto
This is AWESOME! I love any auto, especially one of my Indians. And this happens to be in my favorite set from last year. Kobayashi had 2 seasons. The first half of the year he was great, even doing some closing. The 2nd half he wasn’t as good. I think he just started to wear down. Next year, Wedge will know how to handle him better and I think he’s going to be one of the better guys in our bullpen.

Thank you again Connor for the great Indians cards. I hope you had a great Birthday, are having a great Thanksgiving, and will have a great Christmas!

Now, go get that turkey!

Posted by Motherscratcher at 12:17 PM

Glad you liked it, Mike!

Next year though, I'm going to have to insist that no Indians fans are allowed to send anything. Between you and David from Indians Cards, I ripped through a sizeable chunk of my Indian's collection to "balance" out some of the cards we sent...lol...

I'm really glad you enjoyed the package. Thanks for the post!

This is great! I did not know anyone was a fan of the Ohio American League Semi Pro team. Nice blog and look forward to more.