Here it is, the much anticipated 2nd part to the critically acclaimed review of the free cards David and Indians Baseball Cards sent me. 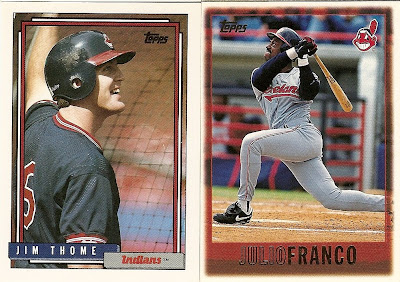 I just love this card. Look at that swing. Julio definitely did not get cheated on that one. In reality it’s probably a pop up. In my head, that sucker’s still flying. 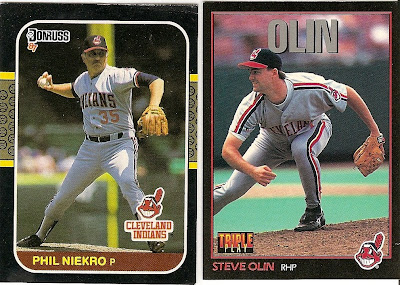 10. Steve Olin – 1993 Triple Play
It’s a damn shame what happened to Steve Olin and Tim Crews. For those who don’t know. They died during spring training when their fishing boat hit a dock in the dark. Bob Ojeda survived. I have the jersey from that year with a patch honoring Olin and Crews on the side. I love that jersey.

11. Phil Niekro – 1987 Donruss
Look at how old Phil Niekro is. He’s like Adam Sandler’s ex-girlfriend’s new boyfriend in Big Daddy. One thing I like about this card is that you really get a good look at Phil’s knuckleball grip. Most of the time I hear that knuckleballers grip it with 3 fingers, instead of the 2 you see here. I Like that Niekro grips it with 2 fingers. Why? Well, I’m glad you asked. It’s because that’s how I grip MY knuckleball. And, my knuckleball is absolutely hellacious. I’m not kidding. Tim Wakefield should give me a call. 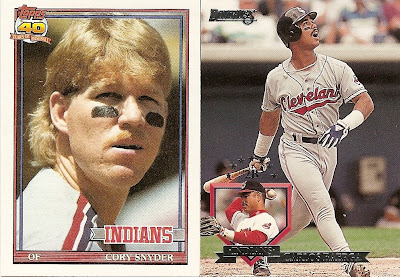 12. Carlos Baerga – 1994 Donruss
Baerga was a big part of the Great Indians Revival of the mid 90s. Acquired in the Joe Carter for Sandy Alomar Jr trade, Baerga went on to hit the absolute holy hell out of the ball for 6-7 years. He was traded right before he hit the wall (for Jeff Kent who the Indians, of course, didn’t keep. No, we like Jose Viscaino.) Why did he hit the wall? Some say it was the coke. Others say it was the coke. We’ll probably never know who was right.

13. Cory Snyder – 1991 Topps
My love for Cory Snyder is no secret. Look at that dude. Look at that beautiful blond hair. It’s a shame he ever had to wear a hat. There is one thing on this card that may make me re-evaluate my entire perception of Cory as a blonde, California, surfer boy who happened to have a cannon for an arm and, on the rare occasions that he did hit the ball, could hit it to Mars. If you take a look at his teeth (I’m not sure how well it will show up. His front teeth are a little uneven. His very front left 2 teeth are a little higher than the others. This can be seen sometimes in pipe smokers where they are constantly biting on the end of the pipe. Could it really be? Cory Snyder, pipe smoking surfer? I’m not sure what I think about that possibility. 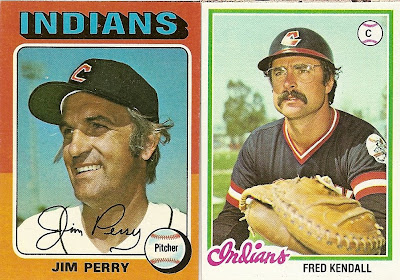 14. Fred Kendall – 1978 Topps
Fred Kendall came from the Padres to the Tribe in 1977 along with Johnny Grubb and Hector Torrez in exchange for George Hendrick. It’s hard to say, in hindsight, who the cornerstone of that blockbuster was. It probably wasn’t Fred. After 8 years with the Padres and a career avg in the neighborhood of .237, the Tribe decided that Fred Kendall was their man to don the tools of ignorance. And why not? As his card says, Fred caught 146 games for the Padres the year prior, more than any other backstop. Heck, he even launched two whole home runs. Sounds like the Indians of the late 70s type of player.

15. Jim Perry – 1975 Topps
I don’t have much to say about Jim Perry. I just wanted to make sure I got a 1975 Topps card in there. What a set.
So, I’ll just share this incredible idea I had the other day. I’m not sure where it came from, but there it was. And, here it is:
I want to open up a pizza joint and call it Pizza Champs. OK? Stay with me here. Now, the commercial would be a bunch of people holding hands, Hands Across America style. And then there’s this dude dressed up like a slice of pizza, and maybe another like a pepperoni roll or a stromboli or something. These guys are front and center. OK? Got it? Alright. Now everyone is just swaying and singing: “All we are saaaayyying. Is git Pizza Chaaaaamps. All we are saaaaayyyying. Is git Pizza Chaaaaamps.” Over and over like that John Lennon song. Man, it has the potential to really get in your head. I’d even bet it’s already scrolling through some of your heads. AND, YOU HAVEN’T EVEN HEARD IT YET! You’re just imagining it. It’s that vivid.
Sometimes I’m so smart I scare myself. That would be a goldmine. 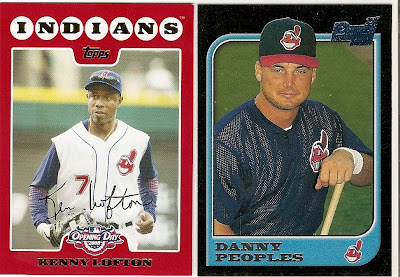 16. Danny Peoples – 1997 Bowman
Man, what the hell happened to this guy? I remember when they drafted him, he was almost some kind of can’t miss. I forgot all about him. Looks like he spent 6 seasons in the Tribe’s minor league system, made it as far as AAA, and that was that.
Think about how hard it is to make the majors. I’ll bet Danny Peoples is the best ballplayer in the history of his high school. There are people who are absolutely astounded that he didn’t make it. Danny Peoples probably played baseball better than I’ve ever done ANYTHING in my entire life. And, he couldn’t make it. And there are thousands just like Danny Peoples. That’s how hard it is to just make it to the majors for a cup of coffee. Think about that the next time to tell someone that a player “sucks”.

17. Kenny Lofton – 2008 Topps
Look how red it is. Great looking card. Why Kenny Lofton didn’t play ball this year I’ll never know. I just can’t believe there wasn’t a team that could use him. There will always be a special place in my heart for Lofton.
I hope I can eventually separate Lofton’s memory from Joel Skinner holding him up at 3rd base last year during the ALCS. Nobody will ever convince me that we wouldn’t have won if Skinner had just sent him. WHY DIDN’T YOU SEND HIM?! 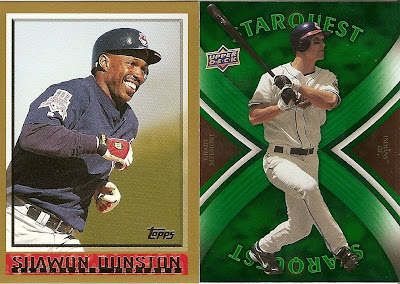 18. Grady Sizemore – 2008 Upper Deck Starquest
Another really shiny and fun to look at card, regardless of the fact that he probably just fouled out to the third baseman. Let’s see what the back says.
“…the outfielder was just one of six players in the American League to accumulate 20 dingers and 20 stolen bases” You know who else accumulated 20 dingers? Jeffrey Dahmer. In his fridge. At least I think he probably did. I doubt he ever made it to 20 stolen bases though, so Grady’s still got that on him.

19. Shawon Dunston – 1998 Topps
I don’t have any idea what just happened to Shawon, but he sure looks happy about it. I’m not familiar with 98 Topps so I don’t know if they all have this gold border or if this is some kind of gold parallel. I guess it wouldn't be too hard to find out, but I’ll do that later. If this is a gold parallel, it will immediately go into a penny sleeve and a fireproof box as part of Grady’s college fund. I’m sure it’s worth $10-$15. I’ll have to check with Beckett. (For those who aren’t sure, I’m definitely kidding) 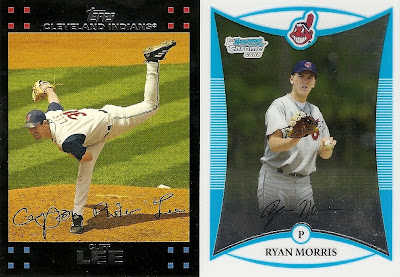 20. Ryan Morris- 2008 Bowman Chrome
I don’t know much about this Kid. He’s been with the Tribe since 2006 but has yet to make it past A ball. This last year and a half has been with the Lake County Captains, who coincidentally play about 5 minutes from where I grew up. Of course they didn’t exist when I was there, but hey…no big deal. So far he’s put up descent but not outstanding numbers. The scouting report on the back of the card states that he “shows excellent competitive nature on the mound.” I’m not sure exactly what that means. I think it might mean he’ll put it in your ear if you piss him off. At least I hope that’s what it means. I’ll be rooting for Ryan.

21. Cliff Lee – 2007 Topps
How awesome was Cliff Lee this year? What a great season. This card talks about how Cliff and Johan Santana are the only 2 pitchers with 32 starts and 14 wins each season since 2004. Mark Shapiro assures us that Cliff is so durable because he takes care of his body. Not long after this card was released, Cliff pulled a quad, started off terrible, was sent to the minors, relegated to the bullpen, and left off the postseason roster. I’m not sure if this card had anything to do with it.
I like this card because of the high leg kick. It’s just a great action shot. And, because his full name is, apparently, Clipson Phiter Lee. That’s a hell of a name.
I'll be back for another installment of this hilarious series soon (infant son willing). I'm hoping to also get up a post for Gellman's project, but I don't know if I can make the deadline. I think I have enough for one more before the weekend.

Posted by Motherscratcher at 7:45 PM

Oh, so many things to respond to!

Cory Snyder appears on a surprising (or maybe not-so-surprising) number of cards without a hat.

Danny Peoples played Class A ball in the very town I live in. As you said, he was consider a can't-miss player. I wish I could remember what he was like, as you get to know the minor leaguers really well, but the mind it is a-fading.

Man, Pizza Champs and Jeffery Dahmer in the same post... Hilarious!! :-) I actually had to sing the song to get the whole picture... Git Pizza Champs, man THAT is classic! I, too, hate that the Tribe dropped Lofton. Man, he is all-time! The Dunston is how all 98's are. there is a gold version, I think, but it is sparkly gold, if memory serves... Snyder is definitely on my all-time fan faves list! There are error cards (not in that set though) where his name is listed as "Snider" like the guy from "One Day At A time." Crap, did i just show my age there?