About 2 weeks ago Grady got his first card. If you are reading this you probably read a lot of baseball card blogs and will not be surprised at all by who the card came from. It was sent by Patricia and Lucy from Dinged Corners, two of the all time great Blog People. I knew it was coming. Not long after I wrote about Grady being born I got an email from Patricia to tell me that a card would be in the mail soon. After a short scare that it might be lost in the mail (as well as the disturbing possibility that I may have somehow forgotten where I live and given them the wrong address) it arrived. I immediately emailed Patricia that we had gotten the card and I promised a post about it the next day. That was only 2 weeks ago. Time, I am finding out, manifests itself strangely when there is an infant about.

Waiting for the card to arrive, I knew it would be something great. Anybody who is familiar with Dinged Corners knows this. That still didn’t stop me from being overwhelmed when it got here. Patricia and Lucy saw the card in a card shop (only the 2nd time they’ve ever been to one) and thought of Grady. Imagine that, they bought a card for someone they’ve never met because his dad writes a silly little blog about baseball cards featuring players with gold teeth and two ear flaps. I can only hope that I am half as thoughtful. 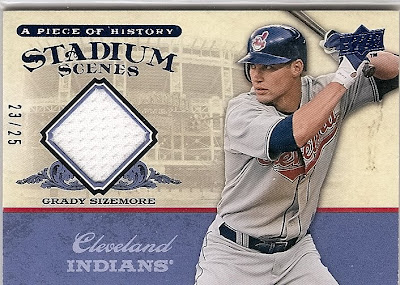 The card is a 2008 Upper Deck – A Piece of History –Stadium Scenes Grady Sizemore Jersey Card numbered 23/25. It is a truly awesome card. Some players are more important to a team than numbers reflect. While Sizemore’s numbers are very good, he is one of those players, and as an Indians fan, there is no player I’d rather have on my team. I feel very lucky that I get to watch him play every day during the season.

Also, and I’m sure this comes as no surprise, Grady Sizemore is my son Grady’s favorite player.

“Seriously Mike, there’s no way you could know who his favorite player is. The kid’s only 6 weeks old and doesn’t even know what baseball is.”

Yeah, well, I’ve talked to him a lot about baseball and the Indians and Sizemore already. Also, Grady has given me no indication that Sizemore ISN’T his favorite player. I’m his father and I think I know him best. Until someone comes at me with Nate Silver like numbers indicating something else, I think it’s a safe assumption. And don’t even joke about him being a Yankee’s fan. Seriously, that isn’t funny.

The card also came with a very nice note and a picture drawn by Lucy. If I had any idea how to use photoshop, I’m sure I could get a better scan of the letter. As it stands I’m kind of an idiot so I’ll just type what it says in case it is difficult to read due to my poor scanning capabilities. 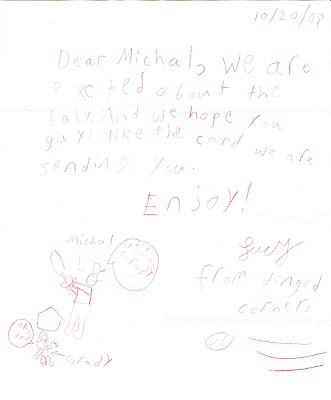 “Dear Michal, we are excited about the baby. And we hope you guys like the card we are sending you. Enjoy! - Lucy from Dinged Corners

This is followed by a nice picture of me hitting a ball to Grady. Let’s just hope that he turns out to be a better fielder than his old man was.

Lucy and Patricia – Thank you very much for the letter and the card. It was very thoughtful and very much appreciated.

Posted by Motherscratcher at 12:11 PM

Ah. If your son is already six weeks old and hasn't expressed disinterest in Grady Sizemore, clearly you're good to go.

PS We are not surprised you haven't been blogging and expect to see a new post maybe every five weeks until Grady is sleeping like a champ. :)

That's a great card sent by some great people! Sizemore is one of the best players in MLB and he's a great choice for Grady's favorite player. My unborn children are huge Evan Longoria fans, by the way...