I had recently put a self imposed moratorium on opening any new baseball cards until I got my current collection organized and cataloged. I still was buying stuff to open, I just wasn’t opening any of it. Well, I’m glad to say that I now have everything organized and am free to bust all the wax my little old heart (pending the approval of my wife and wallet) desires.

Two of the boxes that I had been waiting to open were 2008 Donruss Threads. I was in on the Group Break on SCU and was inspired to get a few boxes of my own. Those of you who saw that break or, God forbid, were involved probably think I’m out of my mind. Well, I can’t argue with that. That break was brutal. Messed up cards. Doubles. Shorted hits. There was absolutely nothing redeeming about those boxes at all.

But I did like the looks of the cards. Also, I figured that there must be bizarro boxes out there that are the opposite of what we got. Mainly I wanted to see if I could add to the amount of Johnny Pesky cards I got from that break, which was 4. I’m crappin’ you negative. I got 4 Johnny Pesky base cards in that 2 box SCU break. My motto (one of then anyway) is “You can never have enough 2008 Donruss Threads Johnny Pesky Base cards.” I’ve lived it for my entire life and it has served me well. 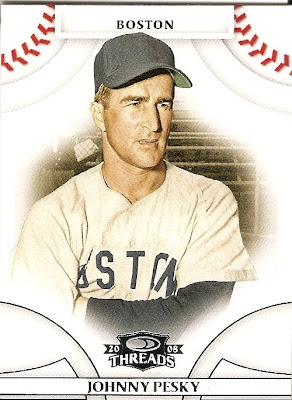 SUCCESS!!!! Johnny Freakin’ Pesky. Man, It’s like those guys over at Donruss are packing boxes just for me. That’s number 5 and counting. 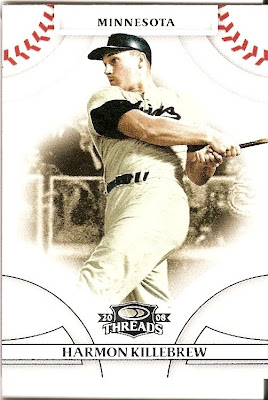 Harmon Killebrew – I wanted to include a few scans of some base cards before I got to the auto’s and the inserts. I figured we could do a lot worse than the Fat Kid, am I right? 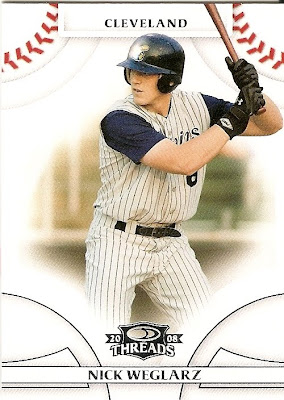 Nick Weglarz – I wanted to get someone from the Tribe in there. How a kid who hasn’t managed to rise above Single A ball in 4 years gets a card in this set is beyond me. 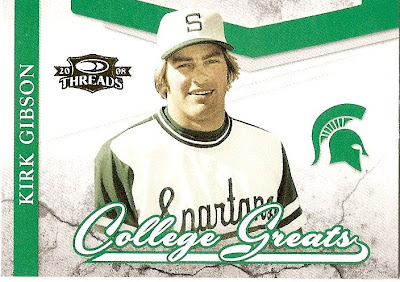 Kirk Gibson – College Greats. Did you know that Gibson went to Michigan State? I didn’t. Says here that he was an All-American in football too. How the hell didn’t I know this? 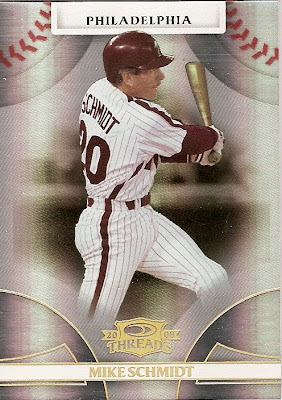 Mike Schmidt 11/50 – This is some sort of refractor or something. It’s definitely shinier than the regular base cards. And, it’s numbered to 50, so it’s got that going for it. Which is nice. 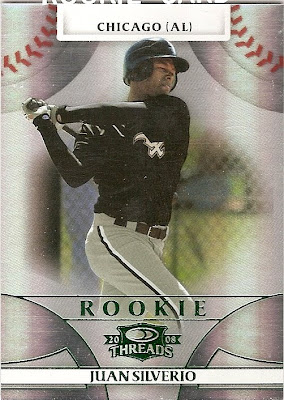 Juan Silverio – 188/250 – This is a green refractor, or something. They probably call it emerald to try to make it sound more special. I have no idea who this guy is. 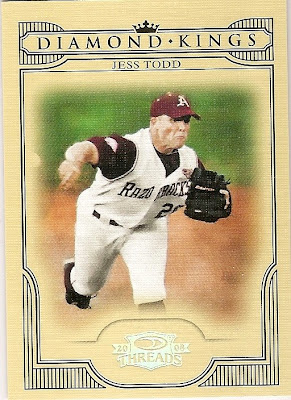 Man, Jess sure is throwing the hell out of that thing, isn’t he? 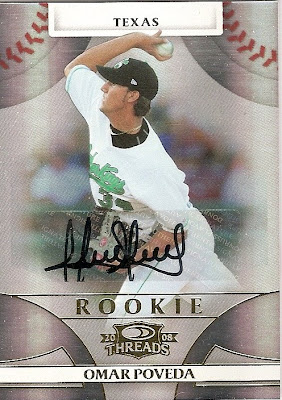 Omar Poveda Auto 628/999 – The card I’ve been waiting my whole life for. And to think I was worried about how to pay for Grady’s college! Problem solved. 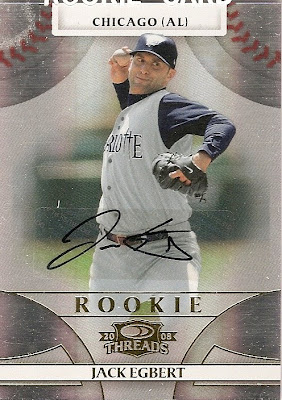 Jack Egbert Auto 001/999 – OK, this time it’s for real. An actual 1/1. Seriously, check the rules. I didn’t make ‘em. (too many times with the same joke?) I’m glad I got this auto. I just get a good feeling about this kid, like he might be the next Scott Elarton or something. Besides, how do you not like a dude named Egbert? 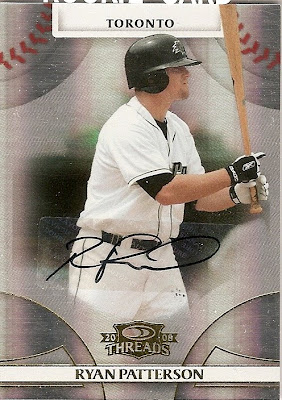 I don’t know
Lets take a break before we reveal the last hit to pay homage to Hammerin’ Hank. 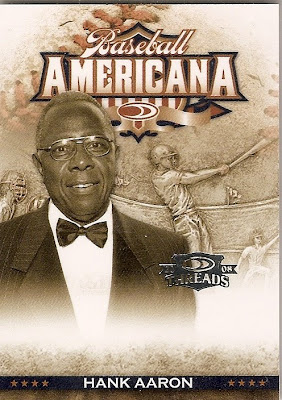 Hank Aaron Baseball Americana 395/500 – Cool card. I’d still rather have one of his regular cards from when he was playing but I’ll take it. This is the first time I’ve ever pulled an Aaron card from a pack. I’ve got to say, it was a pretty sweet feeling. 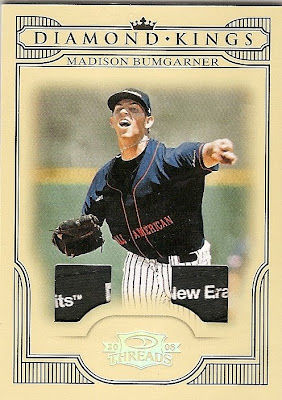 Madison Bumgarner Diamond Kings Jersey 112/125 – I think this is probably supposed to be the best hit. I like the patch and it’s numbered pretty low. When I pulled it I tried to think of how I remembered this kid. Then it hit me. That’s the dude who’s dad tried to reach through the computer and slap Mario. That was pretty funny. I am happy to see that Mario hasn’t shamed Madison into changing his pitching motion. 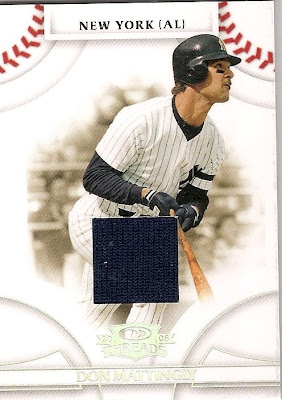 How about that Kids? After 3 “hits” of players I’ve never heard of and 1 “hit “ of a player I only know because his dad is a little to touchy, I get and extra hit, AND IT”S DON FREAKIN’ MATTINGLY! Coolest Mattingly card I’ve ever pulled from a pack.

No other inserts or parallels pulled

Not too bad I guess. I had fun opening them. And I got the whole base set. The only one missing out of this box was Cartlon Fisk and I already had that from the SCU break. I don’t know what the hell to do with my other box now. It really isn’t worth opening for the hits and I already have the base set.

I should show some initiation and sell it or something, but I’m way too lazy. I’ll end up busting it eventually. Hey, I can think of a lot worse ways to spend a few hours on a weekend.

Posted by Motherscratcher at 6:12 PM

Is it me or is that Patterson auto-sticker running awfully downhilll Left to Right?