I know what you have all been thinking this past month:

"Isn't there supposed to be another historic Turk Off?"

"I can't stand this! I want to see another epic struggle waged between these 2 great men, one with beard and one sans, to determine, once and for all (or at least a second time) who is the greatest of the great, who will live to tell the tale, who will ultimately be the master of his cardboard domain!"

"What was the delay?" you are no doubt asking yourselves. Well...it was me. For reasons mostly within my control, but some out of my control, I kept delaying. To tell you the truth, after Beardy shamed me during the Gint-A-Cuffs, annihilated me in Fantasy football, and embarrassed the Browns with his stolen franchise...twice...I wasn't sure I wanted to risk the only title I hold over him...Lord of the Turk Off.

So, I delayed. I dangled turkey red flavored carrots. I devised Turk Off rules that made little sense. I repeatedly ignored emails asking for clarifications and changes. I made him wait...and wait...and wait. He must have spent untold hours just staring at that glorious unopened box of 2006 Turkey Red wondering if he would live to one day see the beauty that most assuredly lurked just under the lid.

I got inside his head. He must be just about insane by now.

Now, some of you may consider this bush league psych out stuff. Laughable, man.

I actually believe that I was doing Beardy a favor. 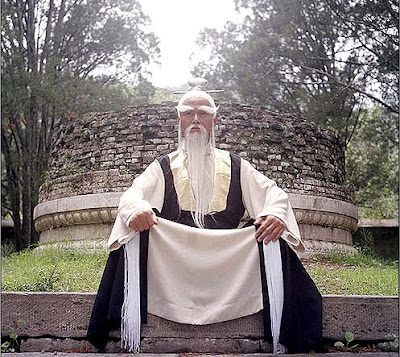 Like Pai Mei to Beardy's Beatix Kiddo, I was teaching him the importance of patience. Because it is important. I'm sure it is. At least that's what everyone else says.

But, his patience, unlike his beard, is wearing thin. And the epic struggle must soon commence. So it was written, and so it shall be done.

Soon to follow will be the official set of Turk Off 2 rules to be used as a reference guide.

After that, hide the women and children because the Turking Off shall begin once again.
Posted by Motherscratcher at 2:55 PM