Ever wonder what Beardy does during the night when he's not opening packs of Ginter and making original Masterpieces and Lebowski cards for his blog? No? Well, I do. I always figured him for a superhero of some sort. Running around in his pajamas bringing misery to the lives of pack searchers or some such nonsense.
Turns out, I wasn't too far off. At least I don't think I was. Because what I've found out recently, is that Beardy is more awesome than any of us ever anticipated.
My recent interweb haunt, since scaling back the old blog to just about nothing, is a web site devoted to all things Cleveland sports. A few regulars, among who's ranks I've joined, go there to wallow in our collective misey. One of the fellas, who goes by the handle CDT (it doesn't really matter why) has what I consider impeccable, if eclectic taste in music.
I recently asked for a recommendation becuase I knew he'd probably come at me with something cool I'd never heard of. I was not disappointed.
He pointed me in the direction of a band called "Clutch". Some of you may have heard of them. I hadn't. I downloaded one of their albums (Blast Tyrant) and found it to be around 7 shades of kick ass. Today I found myself perusing the youtubes and typed in Clutch for shits and giggles. I watched a video of a particular favorite of mine called "The Mob Goes Wild". The following is what I saw:
It's 1 part Blues Brothers, 1 part Meth lab, 2 parts Season 2 of the Wire, and 2 Parts Sons of Anarchy. Mix it all up in a blender and add 5 shots of awesome. Pour it into a glass and top if with a floater of gnarley. That's what this video is.
If you watched that, you can probably figure out what got me started on this ridiculous post. New shit has come to light, my friends. And, given the nature of all this new shit, I don't see how anyone can deny...
That's freakin' Beardy dudes. As sure as Cleveland Sports are cursed that's Beardy. Singing there in all his glory.
And he ROCKS, man.
What? Not convinced? Do you know where Clutch is from? Germantown, Maryland! That's where. Coincidence? Let me ask you this: Has anyone ever seen the lead singer for Clutch and Beardy in the same place? I mean ever?
Anyone? Didn't think so. I don't know how anyone can not be convinced.
But if you're still not sure, take a look at this next video. It isn't one of my favorite songs by Clutch, but I think the evidence will be indisputable.
"Burning Beard" Are you kidding me!? What are the 2 things that Beardy is obsessed with? Nick Markakis and beards. Is there anyone else out there that would have written this song?
And put super cool robots with red laser eyes in the video?
Face it. I've found out Beardy's secret and its awesome. Well done, dude. Well done.
I expect backstage passes next time you roll through Cleveland. I'll have a box of Ginter waiting for you.

BTW, here is a picture I took from the 4th row of the Kiss Concert last sunday. Yes. The Kiss Concert. That's Gene, Paul, and whatever schmoe they tapped to fill in for Ace. (I think his name is Wolfgang or something, although I may be thinking of a different band).
It was all sorts of fantastic. 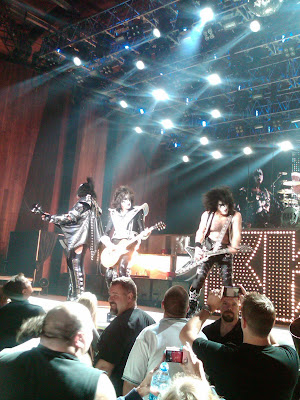 Those geriatric bastards still know how to put on a hell of a show. I highly recommend it.
Posted by Motherscratcher at 10:16 PM 4 comments: