On August 19,1982, Pascual Perez got lost on I-285 in Atlanta. He was looking for Atlanta's Fulton County Stadium. It was his start. He never made it. 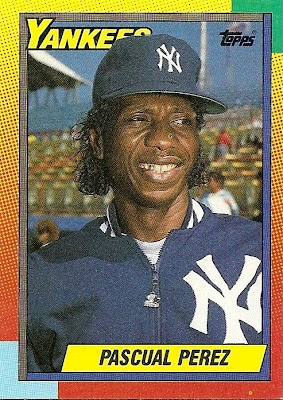 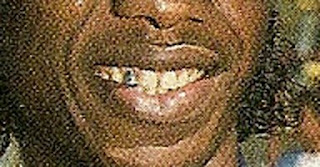 Pascual was a decent pitcher in the Bigs for a few years. He finished after the the 1991 season with a career record that was almost exactly .500. It was a drug suspension that ended his career.

I don't know how a major league pitcher gets lost on the way to the stadium for one of his starts. I don't know if it was drugs. I don't know if he over slept. I don't know if he was legitimately lost. What I want to believe, what I choose to believe, is that Pascual, in a moment of spontaneity that I have never experienced, decided to pull over into some dentist's office and get a gold tooth on #7. Right then, right there. I've been waiting for Pascual to walk into my office my whole career.

If that's what actually happened on August 19, 1982 in Atlanta, I, for one, think that it was worth the lost start.

Welcome to the club Pascual, newest member of the Gold Tooth Mafia.
Posted by Motherscratcher at 10:13 PM

Yeah, just think about how ugly he would be if he didn't have that beautiful gold tooth.

I think you should still post yours. It's not like anyone read this one (other than yourself, which I'm assuming was some sort of mistake).