I'm slowly working my way through the impressive stash of wax that I've built up. The other day my wife was going to the store and asked me if I needed anything. "Baseball cards" I said. She said "Don't you have enough baseball cards?"

Well, as anyone reading this knows...no, I do not have enough baseball cards. That's utterly ridiculous.

Good luck convincing my wife. So, I have to go to work opening and organizing a lot of my unopened wax; most of it worthless, some of it not. No...I am not looking for sympathy. This will be sweet.

The first box opened is a box of 2006 Legendary Cuts that has been patiently waiting it's turn for untold months. Let's see what we got. 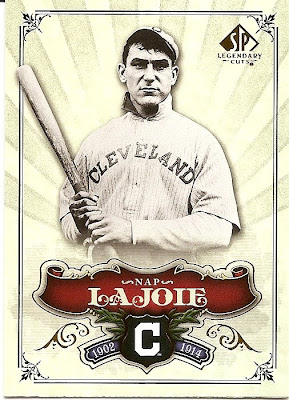 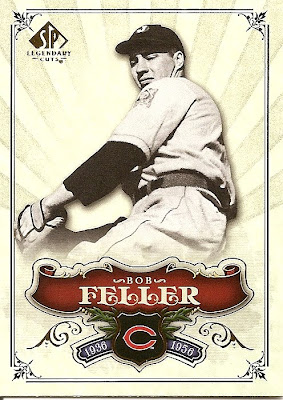 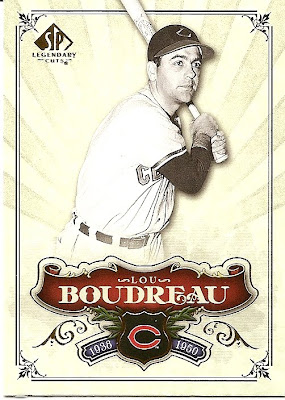 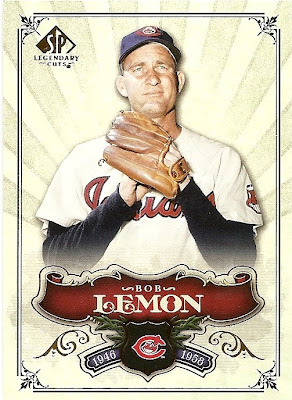 4 of the all time greats. Great players all, definitely legends. I think they made the older players in black and white so they wouldn't have to show Feller's red ass (I'm pretty sure I've made that joke before and I don't care. It won't be the last time either)

I have a question. My son's name is Grady. If I have another son and I want to name him Nap, do I have to actually name him Napoleon? Or, is Nap good enough? 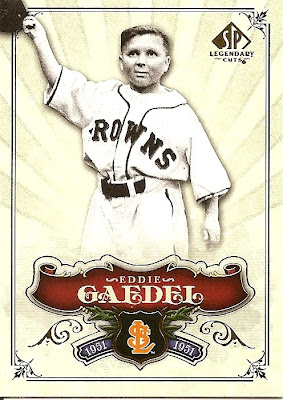 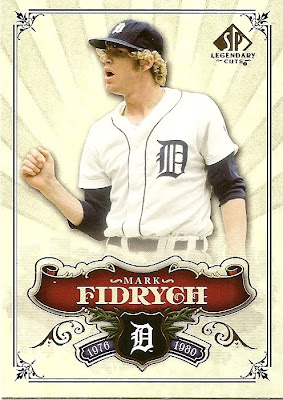 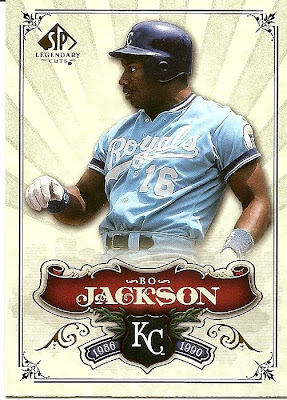 First, are we sure that Eddie Gaedel was a dwarf? I'm not saying that he wasn't small. I'm saying he looks like a 9 year old boy. All of the other dwarfs I've seen look like what they are: men who are small. Nobody would confuse Peter Dinklage with a 9 year old boy.

*I went to school with a guy (a very strange guy) who kept what he called a "midget log." It is exactly what it sounds like. He had one of those small spiral notebooks where he wrote down where he was, what he was doing, how he felt, etc. whenever he saw a little person. This is absolutely 100% true. I am neither approving nor condoning a midget log. I'm just presenting this as an anecdote. Take from it what you will.

Every Bo Jackson card ever made kicks ass. 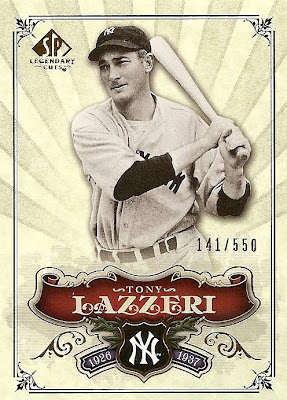 Why they decided to number the Tony Lazzeri cards is beyond me. However, he is a Yankee and we all know how hard it is to pull Yankees. So there's that. 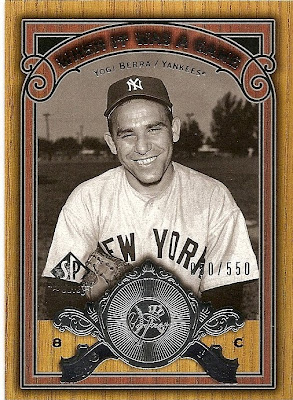 It's apparently as tough to pull this as Tony Lazzeri. I'd rather have the Yogi. Even if he was a Yankee, who doesn't like Yogi Berra?

Not sure why they thought it would be a good idea to make a "When It Was A Game" subset. As far as I know it's still a game. They still use sticks and balls and stuff anyway. 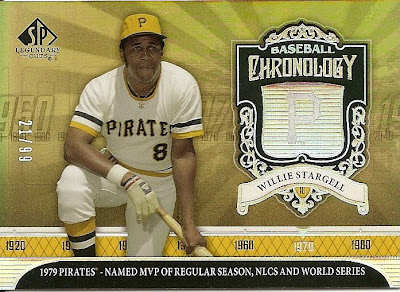 This is a cool looking card that fakes you into thinking that it may be some kind of relic. There is a window cut out where a relic might be. It's filled with silver tin foil, though. How come people don't wrap their lunch sandwiches in tin foil anymore? Plastic baggies are just too convenient I guess.

Not that that has anything to do with anything. 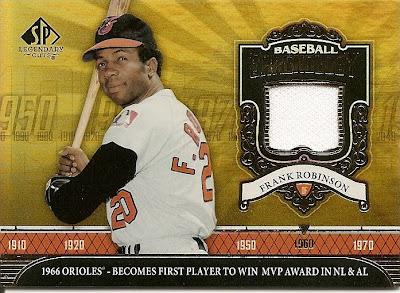 This is an actual relic. The box with the material is legit. No antique lunch sandwich wrapping material on this card. No sir. This has a piece of something that was actually used in an actual game. Possibly even by Frank Robinson (although more likely Jerry Hairston Jr.). It's all very exciting.

I even know a dude who may be interested in this. 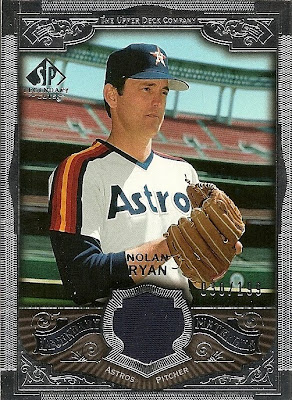 Now that's a pretty cool card. Think I'll hang on to that one for a while. I always liked Ryan...and those Astros unis. I was a great breakout player.

I guess it wasn't a really good box. No cut autos. No autos at all actually. I don't know if that's typical or not.

But it's tough to complain when you walk away with Ryan and Robinson relics. A lot of shiny tinfoily looking stuff too.
Posted by Motherscratcher at 11:25 AM

You're god damned right you know a guy...

Nice break dude. This is the first time I've seen the '06 flavor of Legendary Cuts, and the base cards are pretty nice looking.

There will be a card package incoming by weeks end.

The Nolan Ryan photo looks as if it was taken at Jack Murphy Stadium... The upper deck is empty... probably The Murph. :)

Named him Nap. No Napoleon, no Nepotism, no Neplestiltskin.

Say, would you want to get rid of any of those Tribe car... oh,I guess not! I am going to send you a photo from a wax museum in Cooperstown.Eddie Gaedel standing next to Randy Johnson.