Next in line for busting in my effort to make it look like I have less cards so my wife will buy me more when she goes to Target is a box of 2008 Bowman Chrome.

Bowman Chrome is fun. It's all shiny and Chromey. It's just like Topps Chrome, except it's Bowman.

They should put that on the box next year. "It's just like Topps Chrome except it's Bowman instead." Yeah. That's catchy. Maybe they'll send me a few free boxes for my wonderful contribution.

Or maybe they'll just send me my 2009 Finest Redemptions.

Whatever they decide, here's the result.

Not much to report. A bunch of Chromey base cards. A few Chromey Refractors. And, one Crappy Auto.

I mean Chromey auto (did I say crappy?). 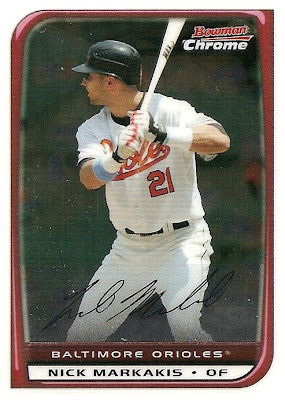 I just figured that this was as good a card as any to show. I already know just which pile this one is going into. 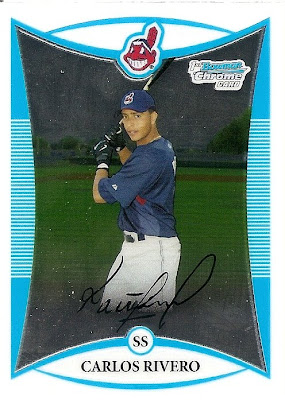 Carlos is a 21 year old short stop in AA who OPSed around 650 this year, so , you know, he's right on track. Actually that's not fair. He's young and for all I know he's a wizard with the glove. Time will tell. 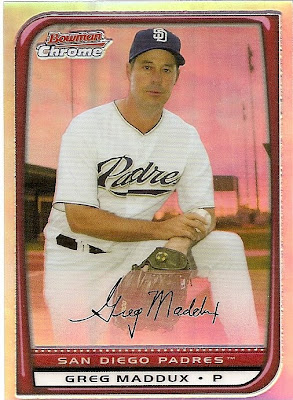 Some people think that the refractor cards look just like the base cards. Not me. There is a huge difference.

For example: Take this Maddux card. If you look at the back in the upper right hand corner under the card number it says "refractor". The base card probably doesn't say that.

See what I mean? Huge difference. 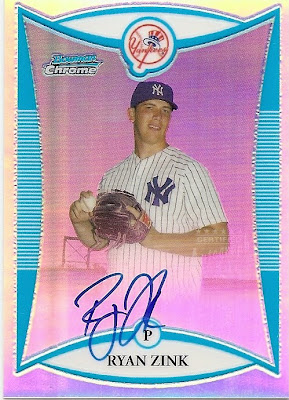 Ryan is a 24 year old right hander who has already made it all the way to High A ball where he's sporting an ERA over 5.00 this year. Yeah, I'd say he's probably on the fast track considering that he's doing it all against guys that are probably only 3-4 years younger than him.

So yeah...sweet pull. And a Yankee too. Yippee. Maybe he can go bowling with Sean Henn.

Actually no. Beardy informed me that Henn is now in the Orioles bulpen. So there's hope for him yet.

Sucky box. Not much to say. No complaints for how cheap it was, though. Probably around $40.
Posted by Motherscratcher at 10:46 AM