I Am Joe Collector had the exquisite case break a few weeks back. I figured it was about time to gloat over what I got. I usually get in on his breaks because it gets me a lot of cool stuff that I wouldn't usually buy on my own. You know...like Exquisite.

I think the high end prices are ridiculous. Utterly ridiculous. Don't get me wrong, I understand the reasons why they cost that much. At least I understand from an elementary economic supply and demand type of view. But it's still ridiculous.

I don't want this to come off as a grumpy "high end is the devil" and "what about the poor children" kind of rant. I have nothing against high end and I'm glad it exists and I think it's good for the hobby. What I mean is that when I step back a little, I realize that I'm a grown man that considers it reasonable to spend around $200 for a pack of baseball cards with 5 cards in it.

That's not something that I would necessarily tell my friends at the bar. They wouldn't understand. They would think I've lost my marbles, and I'm not sure they would be wrong. That's why I say it's ridiculous.

That doesn't mean I don't want them. And when Stusigpi gives me a reasonable opportunity to get some, you better believe I'll be in on it.

I got 2 spots which got me 2 cards, and I won one of the base cards as well. 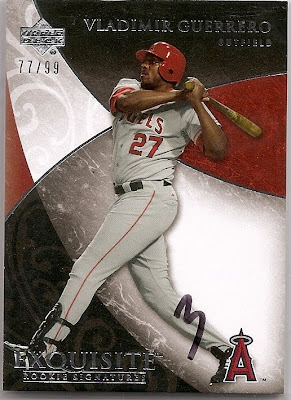 Vlad the Impaler base card. 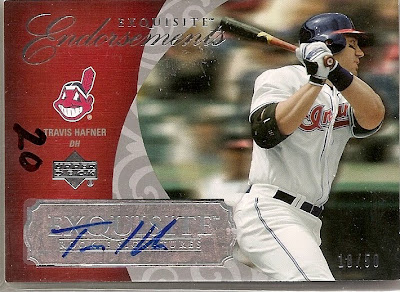 This is probably my favorite card, being a Tribe fan and all. I still have (probably unrealistic) hopes that he can pull out of his 3 year slide and re-emerge as one of the games preeminent sluggers. 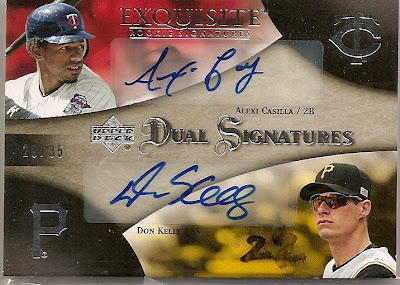 I've heard of Alexi Casilla, and my initial reaction was a good one. However, Baseball reference has his similar batters as Jay Partridge and Arthur Irwin. Yeah, that dampens the enthusiasm a bit.

I haven't heard of Don Kelly. Now on his second go round with the Tigers, he's been released by the Pirates, Diamondbacks, and Tigers in the last few years. Not even a trade for a player to be named later or a gift certificate to Sizzler. Not encouraging. But, a very pretty card. 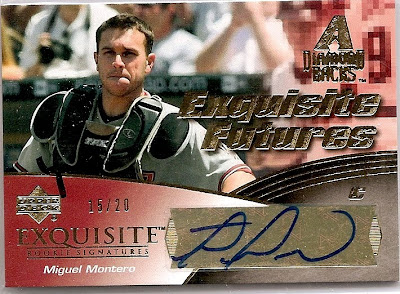 Starting most of the Diamondbacks games at catcher this year, Miguel looks like he's in line for a pretty good, and possibly great, major league career. Nice pull on this one. 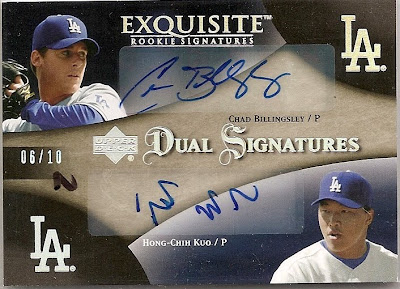 I think this is a great pull. I like Billingsley. He's a hometown boy from right here in Ohio. I know he's not had a great year this year, but I think he's the real deal and is going to have a nice career. He was one of the names being thrown around, along with Kershaw, in the Cliff Lee sweepstakes this summer. I don't know exactly what the package was (or if it was just rumors). I know that what we got was a 19 year old fireballer who was on the disabled list at the time and just had shoulder surgery. So, yeah, I'd have preferred Chad.

Hong is a fixture in the Dodger's bullpen and as far as I can tell is pretty lights out.

Great cards all around. 2 autos and 2 dual auto. All pretty low numbered. All look great. All cards that I wouldn't have gotten of my own accord (except maybe the Hafner if I ran across it on the Bay) out of a product that the idea of busting myself is some sort of future dream.

Thanks for the opportunity Jeff. Good times.

Check out the blog here (as if there's a chance you haven't been there before).

Get in on the group break action. It really is the best blog for group breaks and there's usually something either in the works or just around the corner.
Posted by Motherscratcher at 11:13 AM

Wow...quite exquisite indeed. I agree they're a bit too much (then again I'm generally a $2.99 is too much type guy), but they sure are purty. Montero and Casilla are up there, but the Billingsley/Kuo has gotta be my favorite. Well done sir.

Glad you liked them. Interesting break but I thought it strange that there aren't any HOF players. I know it's "exquisite rookies" but still odd.

Healthcare and IT Professionals said...

I appreciate the skills of your blog writing and the time sharing with us.This is nice blog and the info so for about to the Exquisite cards.
Plastic Cardapnoldul

It's so expensive.. I hope it will last a lifetime :)