My daily trip to Target finally yielded some results. The results were only a gravity box thingy of $2 Topps backs but at least I could finally get some cards. I had already opened a few blasters of Upper Deck a few days ago. Now I have a way to compare the two sets.

A lot of people have busted some of the new products and given their opinions. My objective here is to finally get an answer. I’ve selected a few players in order to compare their Topps and Upper Deck cards side by side. Let’s see how they match up.

Let’s see how it all shakes out. 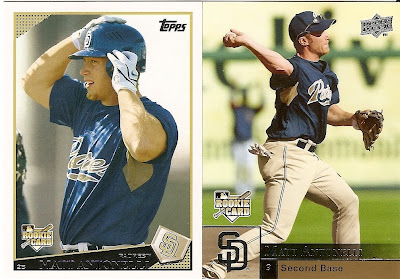 This is allegedly a rookie card for both sets. I’m not sure that means anything anymore so we’ll ignore it. I’m not going to talk much of the overall front design. Either you are like borders or you don’t. I think they both have a good design. Both photos of Matt are decent.

The anecdotes on the back couldn’t be farther apart. UD commemorates Matt’s first HR in a sept win against the Rockies. Topps commemorates Matt getting a hit in his first major league at bat against Greg Maddux and mixes in an appropriate quote. The Topps anecdote wins in a landslide. 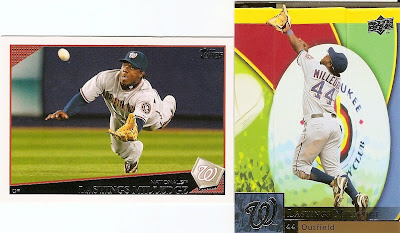 They both get to write the name Lastings (is that plural?) Milledge so even with that awesome name we have to call it a draw. The photo on the front is a huge win for Upper Deck. Topps probably thought they had a really nice shot of Lastings making a diving attempt. They’re right too. It just can’t come close to that great, colorful picture in front of the wall. This may end up as my favorite card in the set.

It doesn’t even matter what the back says. 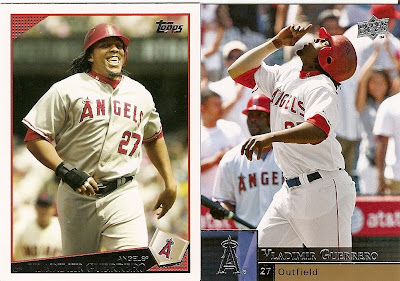 Slight edge to Topps on the front photo. Nothing wrong with the Upper Deck photo, he just looks goofier with that big grin on Topps. I’m thinking of one of the Blog People who will probably appreciate this card.

The UD anecdote is boring and about a 2007 stat. Hey UD, it’s 2009. This is a wash with the Topps anecdote which isn’t there because there isn’t room.

WINNER: Topps by a grin 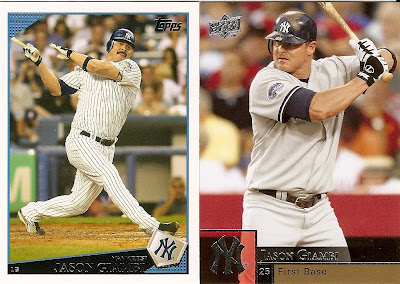 Topps wins the battle of the photos with that mustache. Seriously, I just keep hearing about how great the UD photography is, yet they make a card of Giambi without the mustache. C’mon UD, the mustache is the only reason TOO make a card of this guy.
UD wins the back with a boring anecdote about Giambi hitting the 30 HR mark for the 8th time. Topps, once again, has no anecdote. So I have to give it to UD by a little. However, it’s not even close to being enough to make up for the mustache. Not by a long shot. 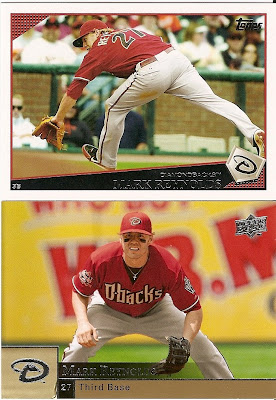 Mini-battle of the horizontal cards. UD wins the front battle. I don’t know why. I just like that picture better on the UD card. Maybe it’s the background, which is pretty cool, although it probably is a spring training photo, being all yellow and whatnot.

*Who else is having trouble getting over the fact that this guy’s only been around for 2 years? Doesn’t it seem like we’ve been hearing about him for 7 years? I swear this guy killed my fantasy team in 2002.

The back anecdotes are equally boring. Let’s give the edge to Topps for having SLG and OPS in the stats. Hey UD, once again, it’s 2009. Let’s get with the program. You’re killing the Royals who (I heard) use your cards as their scouting reports. 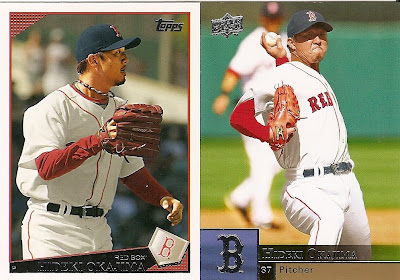 UD wins the front with that stupid look on his face. The Topps picture is kind of boring.

Topps wins the back with a much more interesting anecdote. Okajima is #8 on the Red Sox list with the lowest ERA for a pitcher with 130 innings. The list includes Papelbon, Ruth, Cy Young, and dudes named Rube Foster and Dutch Leonard. Not a bad little tidbit. UD on the other had throws out a stupid little stat from 2007 that would have taken all of 8 seconds to look up in baseball reference.

This one’s close. I like Hideki’s stupid look, but UD gave absolutely no effort on the back. Hmmmmmm…….I like the number 112 better than 54. 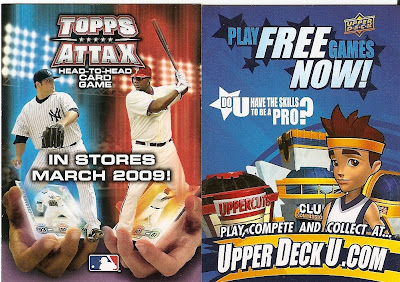 Ultimately, I put both of these out in the back yard. The dog crapped closer to the Topps card. 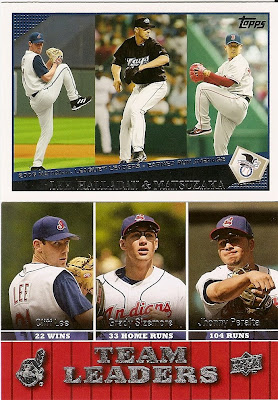 On the one hand, the UD card features all Indians. On the other hand, I’m doing this for the benefit of ALL collectors, whether white, black, male, female, young, and old or Yankee fan. Hell, even Thorzul is entitled to an unbiased competition. So, I guess I like the action shots on the Topps card slightly better.

UD wins the back with nice little blurbs on all of the players.

There is one other problem with the Topps card. Either Topps screwed up, or the leagues re-aligned without telling anyone and Cliff Lee led the NATION LEAGUE in Era last year. 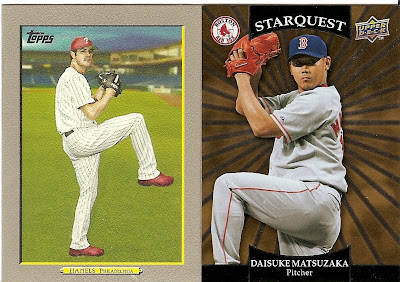 I really love Turkey Red. I couldn’t be happier that it’s back this year. The Starquest isn’t bad either, but if it went away for a year I wouldn’t miss it like I did Turkey Red last year. Turkey Red is better. Hands down. 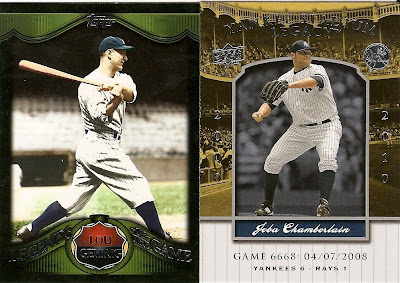 This isn’t even really fair. To put a cool looking Lou Gehrig card against one of the most annoying things ever forced upon the card collecting world. Then again, I didn’t make Upper Deck do it. I about shit when I opened up my first pack of UD and found another one of these stupid things. Is this ever going to end?

Let’s just concentrate on the Gehrig and pretend the other one isn’t there. My only regret is that I can only count this as one win for Topps (or can I?). I’ve got nothing against a gold parallel set. No problem. It’s a nice Ichiro card. If you got all of the gold parallels you’d have a great little set there. But, who doesn’t love the USA baseball set? I mean, Wes Hatton pitched 5 innings, had 8 K’s, and even went 2-5 at the plate. That doesn’t make him better than Ichiro, it just makes this a better, more interesting card.

ULTIMATE WINNER: TOPPS 6-5 or 6-3 if you subtract 2 from Upper Deck for the YSL bullshit. Either way, Topps wins.

So, who here got it right? Did you all know that the Topps set was better? Or, did some of you mistakenly believe that the Upper Deck Set was better?

Don’t be so hard on yourself if you were wrong. It doesn’t make you stupid. Really. At least not stupid in a Carl Everett sort of way. Just not quite as smart as the rest of us. And, there’s always next year.
Posted by Motherscratcher at 6:04 PM

I like the comparisons, but I've gotta go with that Topps card of Lastings Milledge. Action shot, plus you can see his face, plus it is framed perfectly AND you can see the ball falling into the frame. It can't get much better for me!

Dave, you're absolutely right, if the only place to see these cards is in this scan. I thought the same thing myself after I posted this.

Get a copy of both of these cards that you can hold in your hand and look at. It's totally different for some reason. Do that and let me know what you think. I'd be interested to see if you change your mind. Or, if you at least think it's closer.

You might not. That action shot is great in the Topps card. It's just that, in my hands, the UD card jumps out at me for some reason.

I agree that in this post, the Topps looks better, though.

So far, I'm liking the USA cards. I'm hoping to get some from last years Olympic team. So far, I have only seen the under 18 team.

Did you get my email about the Al Fitzmorris card? If not, email me. My address is on my profile, now.

Sir, if I've ever referred to you as thorough prior to this point, I have been premature in doing so.

Thanks for the great review and comparison between the two.

In Topps vs Upper Deck vs cold pizza, however, I'm going with the pizza.

This is a great side-by-side. At least Topps base set photography is in the running this year, which is more than we can say for the last two years.