Cards from Jeff at I Am Joe Collector

Most of you reading this are familiar with the Blog I Am Joe Collector. Anyone who is interested in sports cards should check it out. Jeff (Joe Collector himself) busts more wax than any other 5 bloggers combined. If you are interested in finding out what you might expect from a box, check out his site because there is a decent chance that he’s already opened a box.

My introduction to Jeff came early on in his blog. As usual, I made a complete ass out of myself. After THE OSU got their collective asses kicked up and down the field by USC in September, I made a brief post lamenting the outcome but also pledging my devotion to the Buckeyes. Jeff made a comment about how maybe we should stop referring to ourselves as “The” Ohio State University now. In my misery, I basically told Jeff that he could fuck off. Yeah, I know. As H.I McDonough said: “ya’ll without sin can cast the first stone” or something to that effect.

Well, when I came to my senses, I was appropriately embarrassed and sent an email to Jeff apologizing. I erased the whole exchange from the comments (an act that I completely regret now because it was pretty funny). Anyhow, my boorish behavior did not prohibit me in any way from taking advantage of Jeff’s generous offer of free cards a month ago. That’s right. Jeff busted so much wax that he had to start giving stuff away for free. Jeff is in the process of opening his own card shop in the Pacific northwest so he probably won’t be giving may more cards away. So, I got in at the right time. .

What I didn’t expect was one of those huge 800-1000 count boxes packed full of cards that I didn’t deserve but accepted anyway. It was packed with a lot of Browns and an assortment of others as well. I thought I would spend some time posting some of the stuff I got. He’s also doing some group breaks. There are spots open so head on over to join up

This first post is spent in honor of my beloved Buckeyes 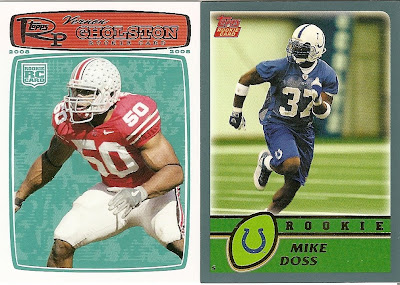 Vernon was a bad bad man at OSU. He set the school record for sacks in a season with 14 (A record that previously belonged to Mike Vrabel) and was the only guy who was even remotely effective against LSU in the National championship. A big, athletic guy from Detroit, I think he only played 2 years of organized football before getting to Columbus. He’s a huge, bulging, beastly man.

From everything I can gather, he was a huge disappointment in NY this year. I guess he had trouble moving from DE to OL in the 3-4. Whatever the cause, I think it’s way to early to give up on this guy.

This is the only Topps P card in the whole box. I’m pretty sure that Jeff, even though he had thousands of cards to sort through, and many boxes of cards to get out to people, snuck this card into my box because he knows I’m an OSU alum. If that’s the case, it was very much appreciated. I am, and will continue to be, a big Gholston fan.

Mike Doss opted to return for his senior year and forgo the millions that the NFL had to offer. He ended up with a National Championship, playing safety on a team led by the unstoppable force that is Craig Krenzel. I still can’t believe that out of all the great OSU teams of the last decade, this is the one that won it all. And, against a Miami team that is one of the greatest college football has ever seen. If they play ten times, OSU wins 1 or 2. Hey, I’ll take it.

And, so will Mike Doss, who won a championship, turned pro, was selected by the Colts (one of the best teams in the league and started off a very promising NFL career. He had over 100 tackles his rookie year. 2 years later he was backing up Bob Sanders. Then he tore his ACL. Now he’s a Bengal. 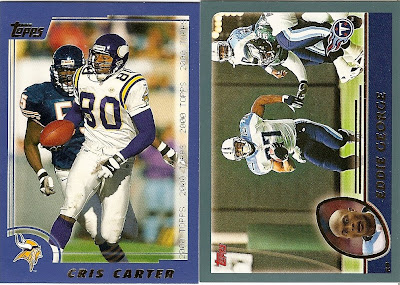 Cris Carter remains one of the greatest players in OSU and NFL history. When he retired, he trailed only Jerry Rice in career receptions and TDs. Following a long, time honored tradition of former OSU players, Carter spent the early part of his career snorting enough cocaine to make Carlos Baerga think “this dude needs to get his shit together”.

But I’m not here to pick on Chris. I’m here to point out that he DID get his shit together. So much so that I’ll bet both of you reading this weren’t aware of his checkered past. Now he’s a wise old NFL sage. He will probably make the Hall Of Fame next year. He started at OSU and was the first in a pretty impressive progression of productive NFL wide receivers from Columbus.

Great story. So there I am. 2001 OSU graduation ceremony. Half in the bag. OK, a little more than half. Rumor has it that this is one of the first graduations that the dental school has been able to attend in a few years. We were apparently banned from the ceremony for a short time because some students from a prior class filled some blow-up dolls with nitrous oxide in order to keep themselves amused during the festivities. I’ve never been able to confirm, nor deny the validity of this rumor. I, for one, choose to believe it.

So there I am, half wasted, who knows when the last time I slept was, standing there in line and feeling pretty good about myself in my fancy graduation robe with the doctor stripes on the sleeves. Seemed like a big deal at the time, as I had been in school for my entire life.

I look over, and not more than 10 feet from me (I’m crappin’ you negative) stands Eddie George in his own robe. There are some people talking to him, a few taking pictures, but it’s not a mob scene. People, for the most part were very respectful. I think I read (or heard) later that he was getting his degree in landscape architecture. For those who don’t know, that is NOT a creampuff degree.

I remember what struck me the most was his size. He didn’t appear any bigger than anyone else. At least not remarkably so. I had the feeling that if I went over to him he wouldn’t be much bigger than me. The difference would be that where as he looked to be chiseled out of granite, I appear to be molded from jello. Still, I’m as big as Eddie Freakin’ George! 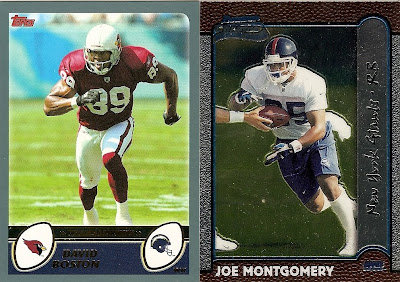 It’s hard to imagine what this guy could have accomplished if he could have only stayed healthy. He was a beast of a receiver for the Cardinals in ’00 and ’01. He just couldn’t stay on the field. Oh, and there was also the whole steroid thing. But who pays attention to that stuff in the NFL? We only care about that if it’s baseball.

This is my favorite card out of the whole box. Joe was a member of the 1998 Buckeyes. This is a team that, I think, was probably the best Buckeyes team of the last decade. Unfortunately, Joe spent that year backing up Michael Wiley. Wiley was a good back, but I really thought Joe was spectacular, and if given the chance, would run roughshod over the Big 10.

I may have been biased. I remember seeing Montgomery in the dental school that year. I was just standing there, trying to avoid work of any kind, and Joe Montgomery walks by. Now, Eddie George was not physically imposing. Up close he just looked like the kind of guy that would never take a solid hit. Elusive.

Joe Montgomery? That dude was THICK! That’s the best word I can think of. Thick. After seeing him, I had no idea how he was ever tackled. Seriously, in his entire career, I have no idea how anyone ever tackled Joe Montgomery. He was the single most powerful looking human being I have ever seen in my life.

The NFL, however, was not as impressed. He only lasted 3 years and saw limited time. He’ll always be a god to me. 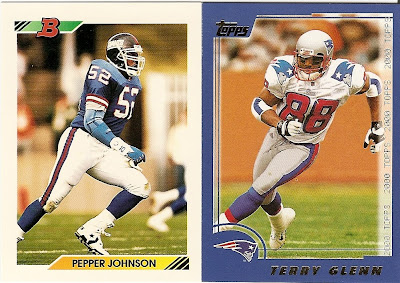 Glenn was a walk on receiver at Ohio State and ended up a Biletnikoff award winner. Drafted in the first round by the Patriots in 1996, coach Bill Parcells, for some reason, decided that Terry had a vagina. Well, in his rookie season, Terry took his vagina and caught 90 passes for 1132 yards. Not too shabby. I thinks he’s been out of football for the last year, but don’t worry about Terry. It’s not like the guy’s going to get arrested for walking around naked in a cheap Texas motel with Mary Jane for company. No way. This guy’s a class act. He’s A Buckeye. 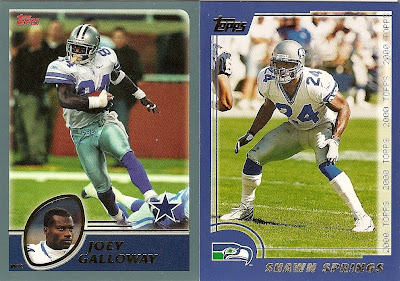 Joey has quietly put together a great career in the NFL. He only had 13 receptions last year, but I wouldn’t count him out just yet. Joey is from Bellaire Ohio.

What I know about Bellaire is from a high school wrestling tournament. I took third. This was a VERY successful tournament for me. I always think fondly of Bellaire because of that.

The pro bowler from Ohio State is still doin’ it. Shawn is probably the 1st in a long line of very productive professional defensive secondary players that will be carried on this year by Malcolm Jenkins. Shawn was the 3rd Overall pick in 1997.


OK, that’s enough for now. This is way too long. Next time I’ll get into some of the Browns players I received from a man who (not too long ago) I told to go fuck himself. Crazy World.

Thank you very much Jeff.
Posted by Motherscratcher at 2:37 PM

Labels: Buckeyes football, I am joe collector, Im an idiot

I cannot, however, join you in your celebration of Chris Carter. He was a dirty player with the Vikes, and I can remember, on many an occasion, tossing my foam "packer stress brick" at the tv because of his cheap shots.