End of an Era

The Andy Marte Era has officially come to a close in Cleveland. The Indians released Marte today to make room for a 30 year old minor league reliver on the 40 man roster. Everyone who follows the Tribe could see it coming. I'd wager that nobody wrote a strongly worded letter in his defense. 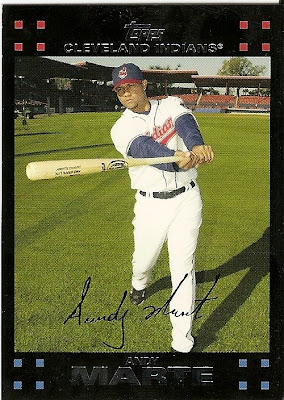 Marte was the third baseman of the future. He was a top Prospect of the Braves and tore up the minors. I'll bet once upon a time Dayf was sorry to see him go. After a brief stop in Boston, he was the centerpiece of the Coco Crisp deal. That trade went like this:

Coco Crisp - After playing very well in Cleveland, has been a huge disappointment in Boston.

David Riske - Dave bounced around a bit and has landed in Milwaukee. He's still a middle reliever.

Josh Bard - Josh Bard couldn't catch a knuckleball and was shipped off to San Diego where he played like an all-star for half a season and fell back to earth.

Marte - Could never put it together. Played horribly every chance he got. Ran out of chances.

Guillermo Mota - I think Guillermo Mota is doing time in South America for lighting someone on fire and killing them with a machete or something. Maybe that's Urbina. I can't remember. If he's not in the slam I have no idea where he is.

PTNL Randy Newman - 24 year old reliever who just made it to AAA at the end of last season. Not considered much of a prospect.

Kelly Shoppach - Became one of the best offensive catchers in the game last year. Played so well that the Indians talked about moving Ryan Garko (and the piano he carries on his back) to the outfield to make room for both Victor Martinez and Shoppach in the lineup. I heard some fans talk about trading Martinez.

I think the clear winner of this deal is the Indians and it's only because of Shoppach. Everyone else has been a disappointment or was never too valuable to begin with. The funny thing is I'll bet Shoppach was a throw in to give the Tribe another backup catcher to replace Bard.

I guess you never know how things will turn out

If I was another team, I'd snatch up Marte in a hurry. Not because I think he's any good. I don't. He sucks. But you never know. Maybe he just needs a fresh start. What makes me nervous as a Tribe fan is I feel the same about Marte as I thought about Brandon Phillips a few years ago.

Would anyone out there Like Brandon Phillips on their team?
Posted by Motherscratcher at 8:21 PM

The big winner was the Braves. I wasn't happy to see Marte go, but we ended up getting an All-Star shortstop out of the deal so I understood it. Then we traded Renteria for Jair Jurrjens who is our #3 starter and has plenty of room to improve, and Gorkys Hernandez who is a top outfield Prospect. Not shabby at all. I don't know what happened to Marte though. Maybe some of Scheurholtz's patented pumping up the value of our prospects and then pawning him off on a sucker trick.

Ugueth Urbina is the reliever who had all sorts of legal issues.

Guillermo Mota signed with the LA Dodgers this offseason after spending time with Milwaukee and the Mets in recent seasons.

Guillermo just took PEDs. He didn't go nuts in Venezuela. But the potential is there.

Jeez, that is a pretty good haul for the Braves. I had no idea who they got. I only knew the Indians end of it.

I thought it was funny that it took a second for me to remember that it was Urbina and not Mota that went nuts. I had to work it into the post somehow.

Dang, wish I'd read this sooner and replied. Ya, Mota pitched for the Brew Crew most recently, along with Gagne being horrible prior to the break, and then nearly lights-out after the all-star break. Of course every time I see Harold Reynolds on MLBtv I think it's Mota haunting me.