My son stopped demanding my attention for a short time this afternoon which allowed me to spend some time organizing my collection. For me this exercise is never ending (and for some reason extremely enjoyable. I think I like the organizing as much as I like opening new stuff. Yes, I'm a weirdo.).

I decided to spend a little of my time opening a Stadium Club blaster that had been staring me down for about 6 weeks. The advantage of the frequent emergency runs to target is that I can pick up some baseball cards on each trip. I've just made a promise to myself that I won't get too far ahead of myself and open cards faster than I can organize them.

I got a few blasters of the Stadium Club and opened one a while back. Usually I'd rather get a hobby box of a product like this, but at the ridiculous price of $200-225, blasters it was.

Well, it finally paid off in my first pull of an auto in ANY blaster that I can think of. I've got to tell you, it's a pretty cool feeling when you pull an auto that you aren't "guaranteed".

Here it is. Blake DeWitt in all his glory. My first retail auto. He has a nice sig too. You can almost read what it says. Most sigs now-a-days are just squiggles. Granted, it isn't a Jackie Kennedy Onassis hair card, but it will do for me. 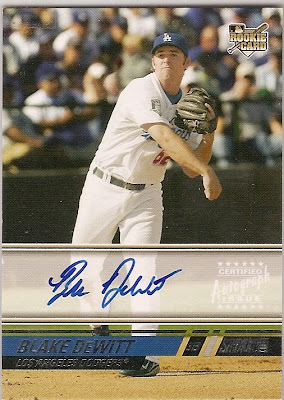 I couldn't be happier. OK, that isn't true. I'd be happier if it was Sizemore, but I'm sure not complaining. As I said a few posts ago "What a Happy Day!"
Posted by Motherscratcher at 8:29 PM

Oh, MAN, you're killing me! You let a Blake DeWitt auto sit there for 6 weeks! Your punishment is sending me that card immediately!

Email me your address!

Good things come to those who wait!