The Best Card In American Heritage (so far)

I went out last night to pick up dinner. It was a very successful trip. I decided to stop at the Giant Eagle for some beer. I came home with a twelve pack of Great Lakes Conway's Irish Ale, a six pack of something called Leffe, and 6 retail packs of 2009 Heritage.* I couldn't have been happier.

*It's strange that they had heritage but still no sign of 2009 Topps or Upper Deck.

After dinner my wife helped me open that cards (she's not really interested but she never argues. I really think she enjoys it) when she starts laughing hysterically. She just hands me this card of Harry Houdini. 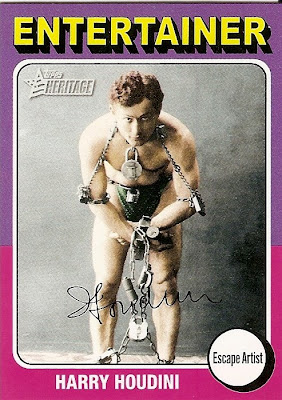 She couldn't believe that this was the picture that Topps decided to put on the card. Not Harry upside down in a straight jacket. Not Harry chained in a tank of water. No, they went with Harry mostly naked and chained up like The Gimp. It immediately became one of my favorite cards ever. 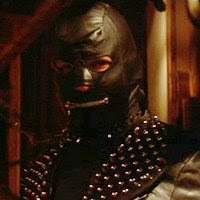 I want to thank Dave at Fielders Choice. I realize that this may not be the EXACT set he was talking about, but hey, close enough. Who knows, I may never have even seen this ridiculous card.

The only disappointing thing is that this was the only picture of the gimp I could find anywhere. And that includes at least 3-5 minutes of exhaustive research.
Posted by Motherscratcher at 12:54 PM

Disturbing that any baseball card blog should reference The Gimp. Kudos to you, sir, for accomplishing this feat.

I'm concerned that Houdini looks more like the, uh, group that Average Joes got their uniforms mixed up with in their first match in Vegas on the great feature film that should have won 7 Academy Awards...."Dodgeball"