Dubbs over at Cheese and Beer sent me a package a short time ago. He also made me that handy dandy banner you see at the top of my blog. Dubbs takes good care of me. The only thing I can figure is that maybe he feels like he owes me after taking CC Sabathia away from me last season (Dubbs is a Brewers fan). Whatever the case, Dubbs kicks ass, and so do the cards he sent me.

I've been trying to make it a practice to do a thorough review whenever I get some cards from another blogger. That's why it takes me so damn long to get the reviews and the thank yous up. I apologize to all who have sent me stuff that I haven't reviewed yet and I hope this in no way deters anyone from sending me free cards that I don't deserve.

Here is part 1 of the review of the loot from Dubbs who is a good man, and thorough. 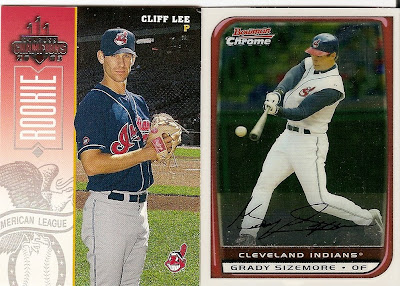 Clifton Phifer Lee. Can you believe that's his real name? I always thought he looked like Don Flamenco.

I love Grady Sizemore, and I love Chrome. Be it Topps or Bowman, Chrome are probably my favorite cards. Right now my Sizemore collection stands at about 60 different cards (Dave and Mario are safe for the foreseeable future) but I had yet to lay my hands on this card.

It's a good thing I have it now. As much as I like Sizemore, I wasn't aware of the full extent of his skills. Grady, it seems, "combines precise mechanics with bat speed and lightning hands". I shit you not. Lightning hands. It says it right there on the back of my card. 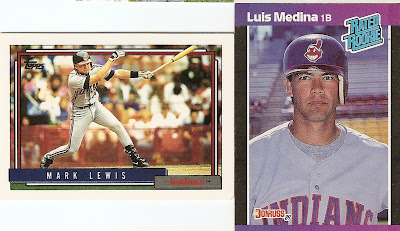 Mark Lewis was going to be awesome. He was the second pick of the 1988 draft. A local boy from Hamilton Ohio. As far as I remember, Mark Lewis was the most exciting rookie that the Indians had since Joe Charboneau. He was going to save the franchise.

And for a while, it seemed like he really might. Back then, we cared about Avg, Hrs, and RBIs. Probably in that order. There was nothing you loved more than to look up your teams stats in the Sporting News or the local paper and see .300 or higher next to a bunch of your guys names. Mark Lewis was called to duty at the beginning of 1991. In April, he mostly rode the bench but made the most of his opportunities. May rolled around and Mark Lewis would no longer be denied. He played 27 games. He hit .355. That's all that mattered. He was a force of nature. I put all of my hopes and dreams in the capable hands of Mark Lewis.

I have very little memory of Funky Cold Medina the player. I have very strong memories of Luis Medina the Rated Rookie. I couldn't tell you a single thing about him, but I could have described this card to you in detail even though I haven't looked at one closely in years.

Luis Medina was going to be a star. He may not be a force like Mark Lewis, but a star never the less. I know this because he was a Rated Rookie, and the greatest card ever produced also had the same honor bestowed upon it. Only a player worthy of such a great honor would be allowed admittance into the that exclusive club presided over by Jose Canseco. That is how I knew Luis Medina would be a star. In his entire career, Luis Medina hit .207 in 51 games.

I will not be too hard on myself. Nor do I blame Donruss for misleading me. It seems that everyone thought that Medina deserved to be in that club. Before the Indians drafted him in the 9th round of the 1985 draft, Medina was drafted by the Mets (twice), Yankees, Reds, As, and Astros. Inexplicably, he would never sign. I guess he was holding out for Cleveland. Who could blame him? Who wouldn't want to play in beautiful, sunny Cleveland?

Go out and buy a box of this product. Why? Because the cards are cool looking, there are a couple of nice little speed and power subsets, you'll get a few autos, and a box will only run you about $25. You really can't beat it.

Anyway, I really like this set. I can only assume that the boxes go for so cheap because I'm the only one on the face of the earth that does like it, I'm just a sucker for cheap cards. And look at that card. That is a cool fucking card.

I'm pretty sure this is what they mean by die cut. I think this is a fantastic card. I don't know what the significance of the "X" is in these cards and this set. 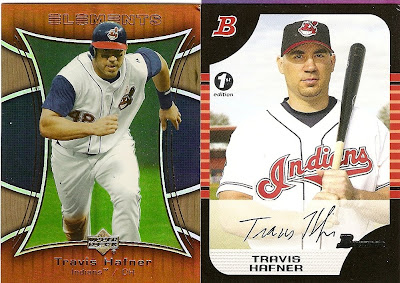 Travis continues to insist that his shoulder feels great and he has no problem now. I sure hope so. I love Hafner. Good Times in Cleveland whenever he gets going.

The back tells us what Hafner's skills are. One of them is "makes great contact, hitting the ball where it's pitched". Just once I want to hear about the player that hits the ball where it isn't pitched. You know, just to fake out the defense.

Also, apparently Hafner is "aggressive on the bases". With 7 stolen bases in 7 seasons it's sure hard to argue that point. When I think of Hafner that's the first thing that pops into my head.

See, there he is, wreaking total havoc on the base paths. I have it on good authority that before the 2007 division series, Joe Torre told the Yankees that if they lost that series, it wasn't going to be because of Hafner's baserunning, by God. They were going to shut him down when he got on base. As it turns out, they did shut down Hafner. Not a single Stolen Base by him in the series. The Tribe somehow managed to defeat the Yankees anyway. But, it took an act of God (or possibly Jame Gumb). It sure as hell wasn't because Torre ignored Hafner on the Base paths 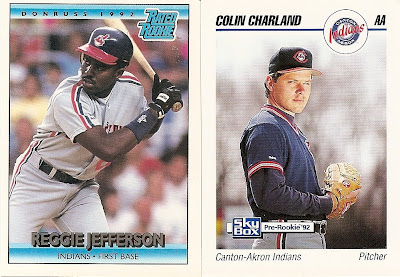 He seems like the perfect kind of player to stick on a baseball card and call him a pre-rookie.

By 1992, the mystique of the rated rookie had worn off somewhat. I never had too much riding on the success of Reginold Jirod Jefferson. The most interesting thing on this card is on the back. It says :

OK, nothing strange about that. I even remember Tim Costo. Then under the Career Highlights, the first thing it says is "wound up with the Indians in June of '91 due to a clerical error by the Reds"

What? Say that again. A clerical error? Can you believe that this isn't expounded upon or explained further? Baseball reference has nothing. I have no idea what this means. Maybe it means they meant to trade someone else but they filed the wrong paperwork. They said "Ah fuck it. Keep him. We're not doing all that paperwork over"

Reggie had some good years in the majors. His biggest accomplishment in Cleveland was being part of the deal that brought us Omar Vizquel. For that, I will always love Reggie.

OK, that's enough for now. Be back with more from Dubbs, somewhere down the line.

Thanks again Dubbs.
Posted by Motherscratcher at 9:14 AM

Glad you enjoy the cards. In my opinion, your writing is closest to that of my own - in wit, and in blue content.

Just don't ever write about the Eagles. I hate the fuckin Eagles, man.