Where Have You Gone Mark Fidrych? 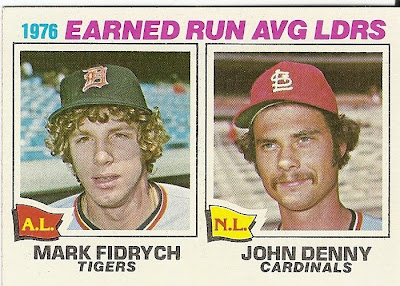 I watched a great baseball game yesterday. MLB network interrupted their on going coverage of the 2004 Home Run Derby to broadcast something that I actually wanted to watch. They are running a feature showing what they call All Time Games. Sunday afternoon's game was the June 28, 1976 match up between the Tigers and the Yankees.

Why was this an all time game? Because it features a mesmerizing performance from Mark "The Bird" Fidrych at the all too brief height of his powers. For a year, Mark Fidrych was arguably the best pitcher in baseball. I only know this because of posts like this from Cardboard Gods. Until that post, I had heard of Fidrych, but I didn't really understand what he meant. Josh Wilker called him "the All Time Single Season Leader in Joy". To tell the truth, I didn't really understand AFTER I read that post. Today, watching that game, almost 32 years after it was played, I finally get it.

The game was a 5-1 win for the Tigers on a warm Detoit monday night in late June. 50,000 fans came out to the park, about 30,000 more than average. The game featured a lot of familiar faces. Willie Randolph was a rookie. Oscar Gamble's fro-tire was about at it's peak. Mickey Rivers and Chris Chambliss were in the pinstripes.

Even A-Rod was at third base, although it was Aurelio, not Alex, and he was playing for the Tigers. I'm not sure if this A-rod had taken PEDs, but I wouldn't bet against a few greenies. Rusty Staub hit a two run homer. I found out that Rusty is one of only two players to hit HRs before they turnd 20 and after they turned 40. The other is Ty Cobb. Or maybe Ted Williams. I can't remember. It was someone good though. Maybe I should just erase that little factoid from this post all-together. Nah, close enough.

Another cool thing was the full blown 70's on display in the stands. Huge afros and facial hair were everywhere. Fans lighting up cigarettes (mostly) in the stands and holding brick sized radios up to their ears. The Umps using those huge cushions with a notch cut out for their chin (why in the world did they stop using those?).

And Fidrych. I'd never actually seen him pitch before. He was like a mad scientist. Amazing control, he didn't walk a single batter, but he somehow seemed right on the brink. He was talking to himself, talking to the ball, stomping the dirt,and demonstrating to the ball exactly what it should be doing before pitches. He was a maniac. The closest thing I can think of to compare it to was Jose Lima a few years ago, but this seemed much different. This wasn't contrived at all. This wasn't just a show for the crowd. This kid really was crazy. And wonderful. It was infectious.

After the game it was like he could hardly contain himself. He was running around and jumping all over the place, congratulating and thanking his teammates, coaches, the umpires, anyone he ran into. The stands were going crazy. He hopped into the dugout like a kid racing for the concession stand with his ticket for free candy after the game. But the fans stayed. They cheered like they had just won the World Series. The ground crew came and started to cover the field and still the fans wouldn't leave. It seemed like forever, but it was just a few minutes. Finally, 21 year old Mark Fidrych emerges from the dugout with a huge smile on his face and unbridled joy like I've never seen on a baseball field.

The cops standing on the dugout seemed to forget where they were for a second and reached down to shake the kids hand. They were jolted back to reality as the fans started piling toward the dugout and remembered what they were actually standing there for. Mark is reaching over the dugout to touch as many people as he can. For a second, it seems like the dam might break and the fans spill onto the field. It doesn't happen. Finally, after stumbling around the sideline for a few seconds with a huge smile on his face, Fidrych disappears again.

At this point I'm ready to change the channel. If you watch this game, DON'T change the channel. A few minutes later Fidrych emerges again, in his socks, to do an indescribable interview with Bob Freakin' Uecker. Just unbelievable all around. I feel lucky to have found it.

I can't help but be disappointed that there isn't anyone like Mark Fidrych anymore. But, I guess there never really was before either.

*I actually wrote this yesterday and tried to see if I could set it up to be published at 8:45 this morning. Obvious it didn't work. Oh well. I did notice that Cardboard Gods has a new post on The Bird a few hours ago. I wonder if he watched the same game yesterday as me? Crazy world. Someone aught to sell tickets. I'm heading over to Cardboard Gods right now. I recommend you do the same.
Posted by Motherscratcher at 8:45 AM

Great job describing that game. I actually didn't see it last night (my post on Fidrych this morning was just a happy coincidence) but have seen it before and it brought a tear to my eye.

I watched this game as a kid. It was a big deal. Fidrych was the biggest thing in the game. And they aired the game on Monday Night Baseball.

I don't remember anything about it though. I wish I had known the game was on (was Cosell broadcasting the game?) I would've watched it. I'll have to catch it again.

I wonder how Fidrych would be treated today?

Speaking of Fidrych and MLB Network. I find myself currently watching the broadcast on ESPN Classic of the '97 World Series...Sorry bro, I won't go into details, but I shed a brief tear for you. Bob Uecker was helping the HORRIBLE Bob Costas call this one, so it was worth watching again. I put a Fidrych card up a few weeks ago, he looked like Napoleon Dynamite in the photo. It was from the '08 UD Timeline set I think.