My foray back into the wild world of card collecting has led me to a few conclusions. 1. I'm extremely lucky that I found a girl to marry me. 2. I have more free time than I've ever admitted. 3. I'm a set collector.

When I was younger and collecting in the deadcard era of '86 - '91, I never put together an actual set. I got plenty of factory sets, but they just aren't the same. The real shame of the whole thing is that half of my factory sets have been opened, sorted, and put in binders 2 cards per sleeve so I had to use less pages. As I get older and wiser I can no longer deny that the $15 that Beckett assures me my '88 Donruss set would normally be worth is considerably devalued due to the short sighted recklessness of a foolish yout. (I'm sorry...yooouuuttthh). I have an email in to Tracy Hackler on the issue, but I fully expect that in it's current condition my set will be valued at no more than $12. I can only hope that it would have been worth $3 to a 13 year old boy to actually be able to look at and play with his baseball cards. Either way it's a lesson learned. NEVER LOOK AT YOUR CARDS.

But enough about that. On to the issue at hand. Set collecting. Since my triumphant return I haven't really settled on an area of focus for my collecting. I did decide to try to put together a few sets and immediately settled on 2008 Topps Chrome. It is far from finished and I haven't completely decided what parallels and refractors to focus on, but it's been fun so far.

But my favorite idea thus far is to collect sets I just made up on my own. The idea came about, as most good ones do, as I sat on the porcelain throne. As I was fiddling with my database I ran across a list I had made of all 36 Ernie Camacho cards ever made (as far as I could tell). I've already blogged about Ernie a bit. Well, I was entering cards into the computer and ran across a fellow named Dick Davis and noticed he had a gold tooth. I was thinking about Dick as I sat on the toilet (I'm adding this as I preview this blog post to let you know that I DO realize how that last sentence sounds and I REFUSE to change it. It's too funny.) and chuckled. Then I started to wonder how many other players might have gold teeth. There MUST be others. This is a set that I want. It doesn't matter that it can never truly be completed. It can just keep getting bigger. And even though most of the players won't be any more than commons, they'll be like gold (teeth) to me. What an awesome set that would make.

Well it snowballed from there and I have lists of other goofy sets I intend on collecting, to be unveiled all in good time. And it all started with Dick Davis.

So the first set to be unveiled it the Gold Tooth Mafia Set. And here is it's one and only member. 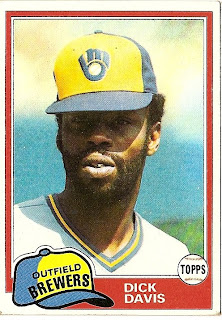 I've personally never heard of Dick Davis, and there isn't a whole lot of info on him. This is his 1981 Topps card. For some reason I have doubles, which probably means he was somehow deemed unworthy of my bicycle spokes. Dick was born on Sept 25, 1953 and he hails from Compton. His best year as a Brewer was '79 when he hit 12 HR and slugged at a .418 pace. Baseball Library has very little to say other than he was a "terrible defensive liability". After being traded to the Phillies in 81 for Randy Lerch, Dick played briefly for a few other teams before becoming a star for the Kintetsu Buffalos. This has led me to believe that the Tom Selleck movie must have been loosely based on Dick Davis.

I know that it is hard to make out Dick's tooth in this picture, but I assure you, it is gold, and it is glorious. Some of you may be inclined to frown upon the gold tooth. What I know is that gold is STILL the most functional and durable of materials from which one can fashion a tooth. One could also put a little diamond in it, if one was so inclined. So all of you spoiled, shallow, bourgeois out there can take you hard, brittle porcelain teeth. Even if it's a perfect match you'll have to get it replaced when it breaks in 5 years. No, me and Dick and the rest of the Proles will take our dependable and thoroughly kick-ass gold.
.
If any of you run across another card with a gold toothed player, please let me know. Somehow, I doubt Topps has kept a checklist for me.
Posted by Motherscratcher at 5:00 PM