Set number 3 in Kramer's Collections is the Subhelmet Hat Alliance.

What is the greatest baseball team ever assembled? For many the '27 Yankees comes to mind. For others it may be the '75 Big Red Machine. A delusional Tribe fan may argue the '54 or '95 Indians, conveniently ignoring the fact that those teams never actually won anything (a small detail). This has been and will continue to be argued throughout time until Skynet becomes self aware.

I'm here to tell you, you are all wrong. The greatest team ever assembled was the '83 Routine Carpet Cleaners. As a proud member of that team I can tell you that we were dominant on a level not unlike the Cobra Kai dominated Danielson before he met Mr Miyagi. We were 7 years old and in the "Little Indians" coach pitch league. These were the days before T-ball. The Routine Carpet Cleaners deserve their own blog post.

What I want to talk about is the next year. The summer of '84 when the RCC was broken up. We were moved to the next level, the minors, where players pitched and coaches brought the equipment and gave out tickets to the candy stand. This was to be my summer of lost innocence. Well, maybe that's overstating it, but it did kind of suck. I was on a new team with new kids and was suddenly playing against better competition. No more 35-2 victories. No more coach tossing it exactly were I liked it. Suddenly I had to worry about getting hit with the ball. Everyone who played little league went through the same thing.

Two things happened that summer that seemed like a really big deal. One was a water line in town broke. The water, now contaminated, needed to be boiled. No more snowcones. No more orange pop (yes pop, not soda like some of you weirdos like to call it). No more long drinks from the water fountain. Suddenly all of the parents needed to eye each other with suspicion. Cliques were formed. The good, clean people, who boiled their water and therefore could be trusted with the water coolers, and the sketchy people who SAID they boiled the water, but maybe didn't. My parents were in the first group. My coach was in the second. It makes for a long summer (in retrospect it was probably only a few days or a week. It just seemed like the whole summer) when you have to decline a drink from your coach because your parents forbid you to drink his water. He knows why you won't drink it. It's very uncomfortable. As far as I know, every player survived that summer without coming down with dysentery.

The second thing to happen was an outbreak of lice. It started as a rumor. Some kids are getting lice. We were informed that in order to protect ourselves were to wear our hats underneath the helmet. It seemed like a good idea at the time. In retrospect it is a little like when we were taught to hide under our desk in the event of a nuclear attack. It was also just as effective. (Actually I'm assuming here. Maybe a desk IS the perfect protection from a huge blast of radiation. How would I know?). I, along with my friends, spent what seemed like days laying on the counter with our heads in the sink while our moms washed our hair with a mixture of vinegar, gasoline, and guacamole and combed our hair with tiny combs. It was brutal. Why they didn't just shave our heads I'll never know.

That experience is the genesis of this set. Players who for some reason STILL wear their hat underneath their helmet as if they trying to ward off lice. They know that it is their own helmet now. They know that lice probably doesn't make the rounds in The Show like it did in little league in the summer of '84. But, dammit, they aren't taking any chances. That's what I think of anyway when I look at one of these cards.

And here is the first card of the set. Jerome Walton: 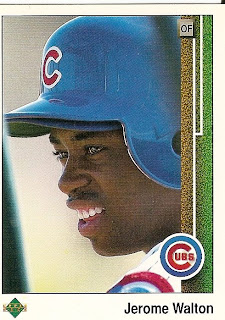 When people think of '89 Upper Deck they invariably think of Ken Griffey Jr. I think of Jerome Walton. Why? Because I'm the A-hole who paid $15 for this card. Jerome Walton, I was convinced would be a Hall of Famer. Even better than Mark Lewis (Indian's Phenom, at least for a few months) and Kevin Seitzer ( who's card is in every pack ever produced). I looked it up and $15 in '89 is like $24.50 today. That is serious scratch for a 14-15 year old kid and remains the most I've ever spent on a single baseball card.

Walton started off strong, winning the ROY in '89 even going on a 30 game hitting streak (I'm sure DiMaggio was nervous). It was his last significant contribution, although he had a decent year in '95 for the Reds. That $15 is like Keyser Soze. Poof...It's gone. It doesn't seem fair. Jerome made close to $3 mil during his major league career. Maybe if I write him a letter he will send me my $15. I won't even account for inflation. That's just the kind of guy I am.

Looking back, maybe when I saw the card with Jerome's hat on underneath his helmet I should have known something was off. Maybe I should have put that $15 back in my pocket. Better to spend it on a sure thing. Like Hensley Bam Bam Meulens.
Posted by Motherscratcher at 1:05 PM

haaa Oh my god. This is so funny. We will immediately begin searching for subhelmet hat cards to send you. I can't remember a single one but they've got to exist. --dinged corners

While you were cheering on Jerome Walton I had Dwight Smith on my fantasy team and was just as convinced he'd be the Rookie of the Year. You were rignt and I was wrong but neither of them had much of a career.

I'm not sure there is a clear cut winner in the old Jerome Walton vs Dwight Smith debate. It's kind of like the late 80's baseball version of Krush Groove vs Rappin'.

I was opening some '90 Score packs today and came across the same Jerome Walton, complete w/ subhelmet, in a different set.

The best subhelmet of that set is #593 Mark Lemke. Send me your email and I'll send you the photo.