This is set number 2 of my original, uncompletable sets. The Kent Tekulve Spectacle Brigade. I knew very little about Tekulve as a kid. He was a national leaguer. Why should I care about him? He was never going to play the Tribe. But from the first time I saw his baseball card the image of his glasses was forever seared into my fertile brains for all time. They were magnificent.

"What an odd looking fellow" I thought, or something to that effect. (Probably not fellow. I doubt I used that word much when I was 12). I just couldn't get over those glasses. And he looked too...well...gauky or something. Since then, every time I see someone with similar eye wear I always think of Kent, even though the glasses are just about the ONLY thing I know about him. 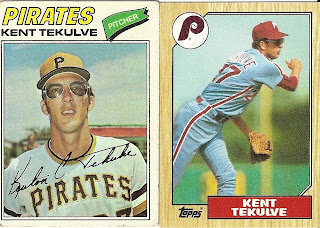 Here are 2 cards of Kent a decade apart. 1977 and 1987 Topps. I scanned both because I think they are the same glasses. I'm not kidding. Look at them. They're exactly the same. This guy probably pitched his entire career in the same specs. Having perfect eyesight myself (I rule) I have no idea if this is unusual. The only frame of reference I have is that my wife seems to get new glasses about 16 time a year. It seems to me that a dude on a major league salary ought to be able to mix in the occasional new pair of specs.

Tekulve did have a good career, spanning from '74 to '89, mostly with the Pirates. He had a goofy sidearm delivery that was apparently very effective. At one time Kent held a few different records for relief pitchers, including most appearances with 1,050. He saved 184 games during a time before there were really save specialists. I guess you could say the highlight of his career would have been the '79 World Series in which he struck out 10 in 9.1 innings, saving 3 games for the champion Pirates "We Are Family" team.

I think Kent had the type of career that should have gotten him more recognition. I think whatever recognition he has outside of Pittsburgh (fair or not) is probably due a lot to his glasses. I'm not the only one to have noticed either. Kent Tekulve does have his own tee shirt. It's pretty kick ass too. Is Tekulve the kind of guy to get his own tee shirt based on his stats? Would he get a tee of his own without those 1970's big, slightly tinted glasses on that skinny face underneath 15 years of ridiculous Pirates hats? Everyone is entitled to their opinion, but mine is "not a chance in hell".

There is no shortage of players in the 70s and 80s with big glasses. Everyone of them gets compared to Tekulve. He is their General. Kenton Charles Tekulve deserves a baseball card set all his own. And, dammit, I might be just the man to do it.

If anyone has good cards of players with Tekulve specs (especially more recent, which are harder to find) let me know so I can add them to the checklist.
Posted by Motherscratcher at 8:18 PM

I came across your blog via The Baseball Card Blog.

Keep the posts coming as you can.

Not to many people I know who can appreciate a 9 fingered guitar player. I saw Phil Keaggy live once.

As far as access, I'm in the early stages of entering everything in. I'm really flying blind though and am not sure it's going to end up being what I want. I plan to try to give some updates and I'd be more than happy to email you with any info you want to know.