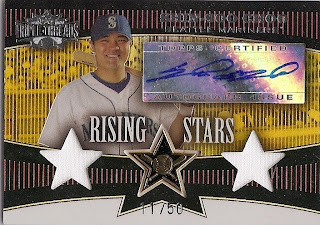 Who here has played some sort of organized baseball? Everybody, right? OK, who had two ear flaps on their helmet?

So why in the world do major leaguers wear helmets with only one ear flap? In a league where teams most likely (Marge Schott’s Reds being the exception) are willing to get each player their own helmet, the double ear flap is seen as rarely as Barry Zito sees the ninth inning. I guess that switch hitters must somehow strong-arm their respective teams into buying them two different helmets. It must be in the contracts somewhere. (I wonder if the equipment managers on teams with a high percentage of switch hitters get paid more.)

I just can’t really see the point. As a little leaguer I remember thinking that it must be terribly uncomfortable having an ear flap on one side and none on the other. And aren’t they worried about getting hit in the exposed ear? I know that a ricochet off the backstop into your ear is unlikely, but is it any more unlikely than Tony Pena Jr getting intentionally walked? It just always seemed a little reckless too me. 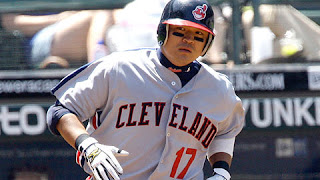 Well, it seems reckless to Shin-Soo Choo as well. When the Tribe traded for Choo, the first thing I noticed about him was the double ear flap. That’s how rare it is. I was a fan immediately.

He was gotten because the Seattle’s (since fired) GM decided that he was less valuable than Ben Broussard. This was around the same time that he also decided that Eduardo Perez was worth Asdrubal Cabrera. So the Tribe got two very promising young players for their ineffectual, aging first base platoon. It doesn’t surprise me that Bavasi got fired; it surprises me that it took so long.

Back to Choo. He was actually a hell of a pitcher with a mid 90’s fastball. He was signed by Seattle in 2000. Traded to Cleveland in 2006 and on July 28, his first game with the Tribe, he hit his first major league home run against, you guessed it, the Mariners, who I’m sure were thrilled to have either Broussard or Perez at first. This past July, Choo came back from Tommy John surgery and for the rest of the season had on OPS+ of 143. He was the player of the month for September and is in the driver’s seat for a starting job next season. 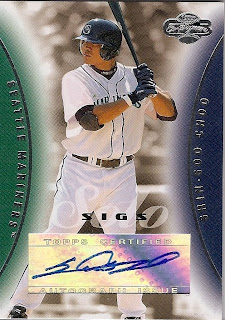 And he’s doing it all with the double ear flap. Without doing any research, I’m going to make up a year when major leaguers went to the single ear flap. That year is 1933. It is possible that 1933 may be the year that the double earflap became dangerously obsolete, if it was ever used at all above the little league level. I have managed to locate some other cards where players used the DEF. It is my assumption that these players are exceedingly intelligent and use the DEF to protect their massive brains. Smart people are on councils, so these players are anointed members of the Council On The Double Ear Flap. And Choo is their GrandMaster…because I like him a lot.

Posted by Motherscratcher at 11:38 AM