So I invent the Council On The Double Ear Flap, and I’m pretty pleased with myself that I’ve found something so exceedingly rare. I make a cute little post about Grandmaster Shoo and I head off to work. After work I stop by the hospital to see Grady and meet Katie. We decide to stop off at a little Irish pub, PJ McIntyres, for a burger and a beer so we can catch some of game one 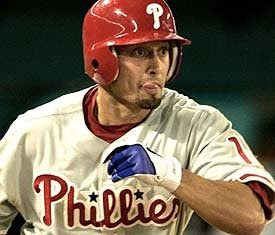 Well, we sit down and order a drink; I look up at the TV: and who’s standing on second base staring at me? The Flyin’ Hawaiian, Shane Victorino, that’s who, in all of his double ear flap glory.

Well, I got so damn excited about it, it wasn’t until later that I realized what a jackass it makes me look at. But no matter, me being a jackass comes as no surprise to anyone reading this blog…or my wife. What matters here is that Shane Victorino just became the second member of the Council On The Double Ear Flap.

This is good. Shane’s a descent player who’s had a hell of a postseason. I just didn’t realize how smart he is, but hey, check out the big brain on Shane. 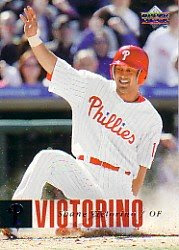 Good for you Shane. Welcome to the Council.

Posted by Motherscratcher at 1:06 AM

I wonder what Jeffrey "One Flap Down" Leonard would think of all this two-flap business?

Jeffrey Leonard was an old school maverick. The "Sarah Palin" of baseball, if you will. In that respect I think we would most likely frown upon the "panzies" with the DEF.

However, you have to consider that he spent the majority of his career in communist San Francisco, where the hippies and the LSD could make you tolerant of just about anything (save corporations).

That's a hell of a question Night Owl. I don't really know the answer. I'll now spend the next 2-3 minutes surfing the interwebs searching for an email address for Mr. Leonard so I can ask him.

I'll let you know if anything comes of it.