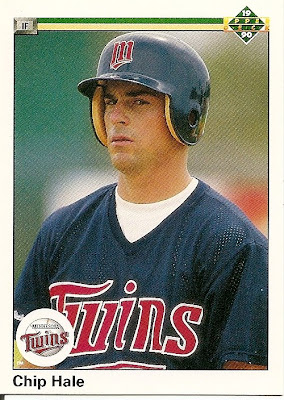 Consider Chip Hale, born Walter William Hale in 1964, the newest member of the 2 Flap Syndicate (formerly known as the Council On The Double Ear Flap*). Chip glares at us from his shiny new 1990 Upper Deck card with a mixture of fear and confusion that I have trouble understanding.

Chip was no doubt the best player in his high school, probably in the whole league. He went from there to the University of Arizona where he was part of a national championship team. In 1987 he was drafted by the eventual World Series champion Minnesota Twins. Two years later he had worked his way through the minors and landed on the Twins bench for 28 games in 1989. He sat in that dugout with the likes of Danny Gladden, Kirby Puckett, Gary Gaetti, Kent Hrbek, and the immortal Carmen Castillo. If this wasn't the exact plan, it had to be pretty damn close.

But they wouldn't stop calling him Chip. They even gave him his old 2 flapped high school batting helmet with a Twins sticker on the front in a vain attempt reclaim that old high school magic.

But Walter William knew the score. And, there wasn't a damn thing he could do about it. They plastered Chip all over the place. On his locker, on his jersey, and on his baseball cards, he couldn't escape it. Hence the look. Maybe Chip knew better than anyone else how this was going to end up.

Chip hung around for about 7 seasons compiling about 1 full season's worth of replacement level stats.

He emerged a few years later as the manager of the manager of the Missoula Osprey, a minor league affiliate of the Arizona Diamondbacks. He's worked his way through the minors in much the same way that he did as a player. He managed the Tuscan Sidewinders to the Pacific Coast League Championship in 2006 followed by a promotion to the major league staff. He's the third base coach of the Diamondbacks.

Even though his nickname doomed him as a player, maybe a "Chip" can be a manager. It worked for Sparky. I wouldn't count him out.

Welcome to the Syndicate Chip.

*I decided that I hated "Council On The Double Ear Flap" 2 Flap Syndicate is much better. I doubt I need to elaborate more than that.
Posted by Motherscratcher at 3:35 PM

what about adding a "per" to the end... then that will turn him into a future Hall of Fame 3rd baseman...

then again, maybe there is only one, Chipper.

Well, I did think about Chipper actually. I decided (rightly) that Chip and Chipper are two entirely different things altogether.

Chip is the BMOC. Chipper is a ballplayer.