Here it is! What you've all been waiting for! 2008 Razor Signature Series!

OK, I know you're not excited because everybody and their Grandma has already opened some of this stuff. But hey, after a week of bombarding you with Big Lebowski cards maybe you are all ready for a change.

I don't break much stuff on here. Most of what I have to open is junk wax. But I got 2 boxes of this for Christmas and I have been patiently waiting to become smart enough to be able to videotape the break and download it onto the blog. Well, I haven't gotten any smarter and I'm sick of waiting.

I was actually pretty excited to get these boxes at Christmas. Like a lot of people I was disappointed at the thought of exclusive contracts. I don't want to be limited in what products I can get my favorite players in. But, it's ridiculous to get mad at Razor for it. They're just trying to make a good product and make money.

I had listened to Brian Gray on the card podcast multiple times and seemed like a guy who genuinely wanted to make a good product; a product that would appeal to a lot of collectors. He seemed like a pretty straightforward guy. Then he went to Beckett to bust some boxes. We all know what happened there.

The way I see it is one of two things happened:

1. Beckett got the same boxes that everyone gets and was extremely lucky...again.

2. Beckett got loaded boxes. If this is the case then I just hope that Brian realizes that it was a mistake and it doesn't happen again.

Either way, I'm willing to give Brian and his company the benefit of the doubt. I guess you could say he won me over on those podcasts.

So, let's bust one of my boxes and see what I got. Hopefully it comes closer to what Beckett got and isn't too much like what Dave at Fielder's Choice got. 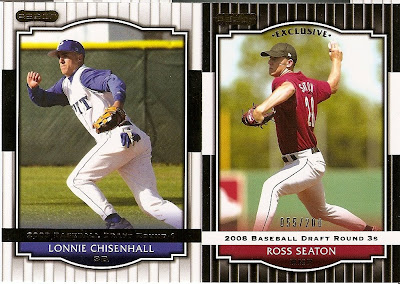 I'm showing the Lonnie because he was the Tribe's 1st round draft pick. The Seaton ended up being the one and only parallel in the entire box.

Razor has made a distinction between the regular autos and the exclusives. I guess the exclusives are considered part of a different set than the other 200 cards.

Justin Smoak is a nice pull. A first rounder, although I don't recall who picked him.

Brett Wallace is another nice pull. That's the second first rounder. I don't know when Wells was drafted but you kind of have to pull for a dude named Casper, right?

Don't know either of these guys. A 6th and and 11th rounder. Hey, Reggie Jackson didn't hit a home run EVERY time.

Hey wait a minute! I got a feakin' double of Casper Wells? That kind of sucks. I mean, it's not as bad as getting 24 Todd Burns's like Night Owl did, but I paid more than $1 for this box (My wife did, anyway).

Brett is a 7th rounder.

Jake is a 3rd Rounder. For some reason I have a good feeling about this kid. Probably the same reason that I still get a twinge of excitement when I look at one of my Greg Jeffries cards. I guess the name Jefferies (or Jeffries) is just beaten into my subconscious as a good card to have. That will probably never change.

I don't think I have much to complain about. 2 first rounders is better than a lot of people did on this stuff. I like the look of the cards and I like that the autos are on card. I also like that it looks like most of the players took enough time to make a descent auto.

In the base set I like that the cards have what round the players were drafted in and the back has the organization. In fact I like the look of the back of the base cards a lot. Nice and simple and clean.

There were a few things I was disappointed in. I wish all of the autos had something on the card signifying the draft position and the organization, just like the base cards. I was mostly disappointed in my lack of parallels either in the base or the autos. A parallel auto sure would have been nice. Since this product is all about the hits I would have been more excited to pull something numbered a little lower than 200. However, I have no idea how often those turn up in boxes so maybe I got exactly what I should have expected. I was also disappointed that I got a double of the Casper Wells auto, but I guess that stuff happens, and I know I wouldn't be complaining if it was a double of Beckham.

The last thing I would say is I would change the back of the autos a little. What they have written on there now: "...Not only does Razor bring you authentic signatures, we bring you exclusive signatures. Look for the "exclusive" tag and Happy prospecting!" reads a little too much like a commercial. I don't really need a commercial on the back of my autos.

I know Brian reads Blogs like Wax Heaven. If he somehow found his way over to this post I'd be curious to hear what he thought about this box and if there would normally be more parallels.
Posted by Motherscratcher at 7:02 PM

Thanks for sharing, nice Smoak!

Don't forget that Crow was a first rounder. He just didn't sign.

Yeah, yeah, yeah... Back to the Lebowskis, Chief.

Those are cool. I may have to hunt down a box myself, just for kicks!