I've been away too long. Partly too busy, partly uninspired. Do you guys get like that? You probably have time to post something but for some reason it seems like such a daunting task? That's how I've been feeling lately.

But alas, the life of an important blogger such as myself, knows no repose.

So I was sitting here, bummed out because my Tribe is, once again, getting mauled by the Rangers (I have no idea why the Rangers are so far down in the predictions of all of the experts and prognosticator types. They're going to score around 2,000 runs this season. Kinsler himself might score 350. They even have some 20 year old dude named Elvis. I'm telling you, they will not be denied.) and trying to think of something to post.

Well, I did get a card in the mail today. So here it is: 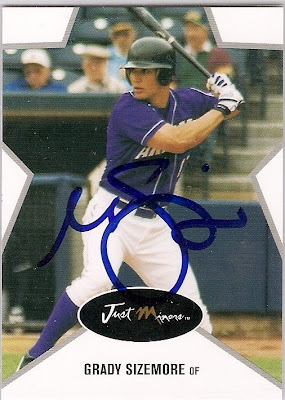 A Grady Sizemore signed 2003 Just Minors. I got it off the Bay for around $5. I know there's a decent enough chance that the guy who sold it is also the guy who signed it, but it looks like a Sizemore auto and it was only $5, so what could it hurt?

Actually, it was sent from Arizona where the Tribe had spring training so I'll bet that some old guy pushed his way past a bunch of kids to get to Grady in order to make some money on Ebay. This makes me kind of sad. Oh well, it won't be the last time that happens, and I have (what I believe to be) a new Grady auto.

Like I said, I got it today and was pretty happy about it. But, what I really wanted to post about was the exchange that the card prompted between me and my lovely wife, Katie. I've posted some of our conversations before because I get a big kick out of my wife and when it comes to these cardboard rectangles we are rarely on the same page. So I'll transcribe that brief conversation in another episode of what I'll dub:

Mike and Katie - Masters of Communication

Mike (M) - Hey, look what I got in the mail! (obviously excited) It's a signed Sizemore card.

Katie (K) - Wow, that's pretty nice (obviously underwhelmed but trying to be supportive of her husband whwith whom she is stuck). How come he's not wearing an Indians uniform?

M - It's from after he was drafted and in the minors.

M - The Expos. I'm not sure who this minor league team is.

I hope you enjoyed that as much as I did. Good times.
Posted by Motherscratcher at 8:51 PM

The Rangers don't have any pitching.

feel like i've had that same conversation with my girlfriend. replace sizemore with markakis and it's almost verbatim.

emailed you about a trade...

I think this is the reason why I don't show my cards to my wife. She'd get that glazed-over look that I get when I'm forced to walk through Michael's craft store.

Hilarious - that's sort of how things go over here. That's a great card, by the way!

As for night owl's comment...man, that is priceless. That's exactly how Connie and I are!

That's funny and sad... Funny because it's funny, and sad because I could have ahd the exact same conversation with my wife... :-) BTW, I share these ditties with her - she so understands where your wife is coming from!

Followup: I showed the post to my wife, and here is OUR conversation:

Me: "Hey, you know Motherscratcher, the guy that posts convos between him and his wife about cards?"

Her: "Oh, yeah!" (actually knowing what I'm talking about)

Me: (showing her the cards) "Well, he wrote about getting this autographed Sizemore minor league card!"