I've been out of town a lot lately. First for a work thing where a bunch of dentists get together and talk about teeth. Then for a funeral, which wasn't unexpected, but still...not good times. So I've missed out on a lot blog posts and I haven't posted anything for a while. I'm trying to catch up.

I did get a little pick-me-up the other day when my new card arrived in the mail. Here it is: A dual auto of Grady Sizemore and Nick Swisher 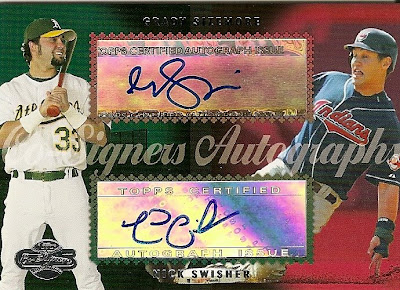 Not too shabby, huh?

My love for Sizemore is well documented. I named my firstborn son after him (well, not really, but that's my story and I'm sticking to it.)

I'm a big fan of Swisher for one main reason. He's a Buckeye. There aren't too many of us in the majors. As far as I know it's only Swisher, Scott Lewis (Indian's pitcher) and Josh Freeman of the Rockies. Not exactly a murderer's row. But, we take what we can get, and so I decided to try to collect some Swisher cards.

I ran across this baby on eBay a few weeks ago and I had to get it. It ended up being around $20. I have no way of knowing if I overpaid, but that doesn't matter. I also have no idea why these two are on a card together, or why they couldn't have gotten a better picture of Grady (where he isn't making a face like he's taking a dump.) Maybe it's because both of them sign terrible auto's

No matter, it's a cool card and I love it.

My only dilemma is that there are 2 Yankees I love now. Swisher and Sabathia. I have no idea how to reconcile that. Any suggestions?

BTW: Check out the Swisher page on base reference. It has pitching stats. Sweet.
Posted by Motherscratcher at 12:23 PM

I think your love of Swish and CC is totally warranted, pinstripes be damned.

I think all will be reconciled the next time your two teams meet - I have a feeling it won't go quite the same way as this last series did.

Your reasons for liking them both are justified.

I however, still hate Mike Mussina for donning the stripes. Him not winning a World Series helps a little though.

I just remember him from the 1997 ALCS. He just absolutely dominated the Tribe for 2 games and we somehow ended up winning both.

Doesn't matter what terms he left here on, bottom line is he went to the dark side.

Fortunately CC and Swish have good senses of humor, cuz their team sucks! Power to them for cashin' in.

What's not to like about Swisher...except he's on the Yankees.

It's not as nice as your NEW new Sizemore card, that you managed to score in the Finest break.