A while back, Stusigpi over at I Am Joe Collector finagled his way into Blowout Cards offering Topps Chrome at the low low price of $43 a box. It was cheaper than I'd seen it by far, before or since. So I picked up a few boxes.
Because I love sparkley things.
Here are some highlights of the first box. You might want to pay close attention because you probably haven't seen a 2009 Topps Chrome break anywhere. 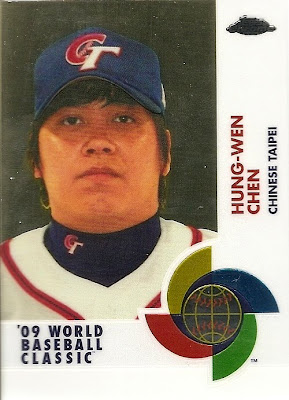 Hung-Wen Chen World Baseball Classic
This is my favorite card of the whole bunch. Look at that guy. Is that the worst picture they could have found of this poor guy or what? Plus, his name is Hung.
But the best thing about the card? The first sentence on the back is "Chen missed the 2009 World Baseball Classic,..." What? Why is he on a card then?
He's in the Cubs organization so hopefully this isn't the last we've seen of Hung. 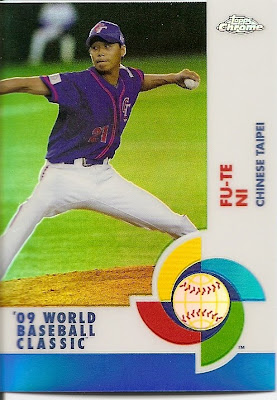 Fu-Ti Ni World Baseball Classic Blue Refractor 168/199
Hung and Fu are teammates. Fu is in the Tigers organization. This card is great for many reasons. I love the name Fu almost as much as Hung. Fu actually has a baseball picture instead of a mug shot. The only thing to distinguish it as a blue refractor is the little stripe at the bottom. It is miscut, I think. There is a small silver stripe at the top that looks out of place. 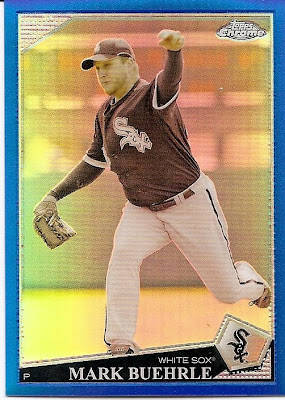 Mark Buehrle Blue Refractor 184/199
Can you believe this guy pitched a perfect game? Not that he's bad or anything, but man. I thought this guy was only good against the Indians. 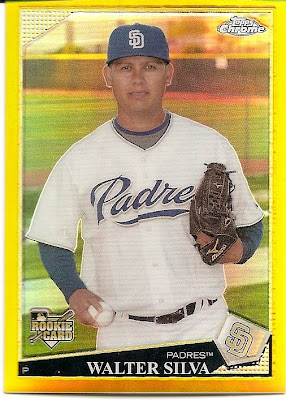 Walter Silva Gold Refractor 29/50
Isn't Chroma awesome with their shiny colorful cards. I love this card. Even if the guy on it kind of sucks, I love it anyway. 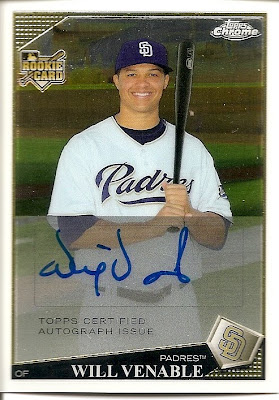 Will Venable Auto
OK, OK. Not bad. I've heard of him. Cool looking sig too, even if it looks nothing like his name. 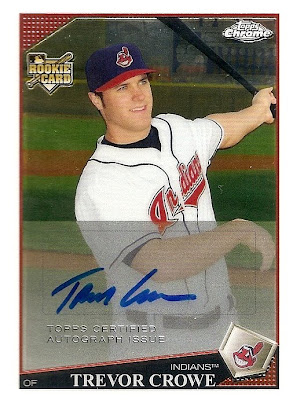 Trevor Crowe Auto
Alright now! An Indian. Even if it is Trevor Crowe. I used to have high hopes for Trevor, a first round draft pick. At this point, at the age of 26, he has pretty much cemented himself in that 4th outfielder at best level. But (much like Gregg Jefferies) I still get a little excited when I see one of his cards. I can't help it.
The good thing about a guy like Trevor is I never have to worry about a club like the Yankees ripping him away. The rub is that I wouldn't really care if they did.
Not bad I guess. A few cool parallels and an Indians Auto.
Shiny as hell too.
Back with a few more down the line.

Posted by Motherscratcher at 5:15 PM

Wow, crazy, we had the same 2 autographs in my break and your break. Good auto collation Topps! I also pulled a numbered Fu-Te Ni but it was the gold version.

Oh, nice. A gold! I have rarely seen those posted on blogs.

Mark Buehrle is also something of a Twins killer, at least according to their play-by-play man.