What Goes Around Comes Around

It was ego really. Just pure ego. I mean really, how did I think I was going to get away with it? Like I was just going to willy nilly Bip people all over the ether with no regard for human life and common decency? Without any consequences? What a fool.
Well, my checkered past has finally caught up with me. I arrived home the other day to find a package waiting for me. I knew who it was from, even though return address said "Bip Robert". I've seen Beardy's writing enough that I knew immediately. I knew what was in it. Some things you just know.
Beardy knew. Somehow he knew. He'd seen it on the blogs. He's always on line. He doesn't have a job. At least not one that requires work. However he figured it out, there would be no running. There would be no hiding. No escape.
Beardy was sending me home to get my shine box.
As I broke out into a cold sweat, my heart started to race. I felt faint. My wife maneuvered a chair under me a split second before I hit the floor. I opened the package and peered inside, my worst fears realized. 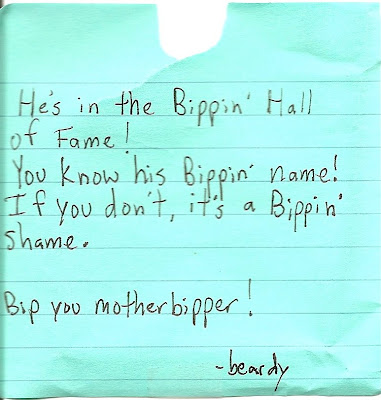 Right there on top was the note. "Christ, he even sent a limerick." I thought. I sent my concerned wife from the room.
She didn't need to see this. She's an innocent. 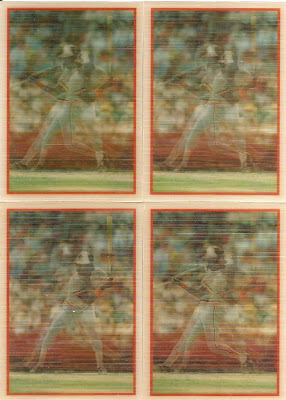 Six 1987 Topps Eddie Murrays. At this point I'm numb. I'm ten cards in and I feel like Eddie Murray is mocking me. I can hear the laughter of a crazed Bearded man some 500 miles to my southeast. I may never recover.
At this point Grady wanders into the room. Panicked, I leap for him. Cover him. Shield him from the still unfolding horror. I usher him, scared and confused from the room and deposit him squarely in front of Elmo's Grill. I retreat back to the office and lock the door. I can't risk him coming in here again. I barely saved him that time.
But I did save him. It is to be my redemption.
Encouraged, I press on. 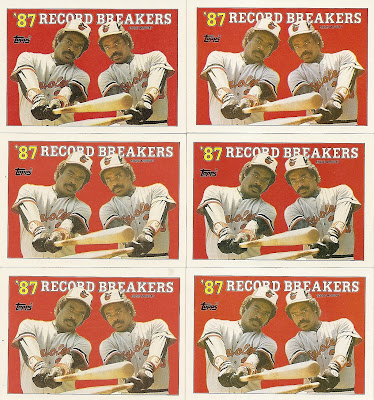 Six 1988 Topps Eddie Murray Record Breakers. Please. No more. I can barely take this. I see 12 Murrays staring back at me from 6 cards; behind glorious mustaches that my wife will never allow. This isn't fair. What I did wasn't so bad. I don't deserve this.
From the deep recesses of my brain I hear the words of William Munny, killer of woman and children, echoing "deserve's got nothing to do with it."
But I saved the boy.
And with that, I pear back into the envelope. Empty.
It's over. Finally over. And I'm alive. Beaten but alive.
It's 2 days later now and I can finally talk about it. Am I the same man that I was before I was Bipped? Hell, I don't know. Probably not. Who could ever really know a thing like that.
At my core I think I'm the same. A little older. Wiser.
Posted by Motherscratcher at 5:53 PM

I need that '87 Eddie Murray card.

Am I clear on that? ONE.

What was that Night Owl? You need that Eddie card? I'll take care of that for you.

Sorry for the bipping bro. Think of it as something done out of respect. You needed to be ego checked, and it has been done. I'm sure there's already a return package on the way. 3 words for you... return to sender.

hahaha I love it.

I take offense to that. Never have I ever lived in Jersey.

Ha ha. Is there a chain of events that started all this Bipping? I don't know the origin.

I just traded away one Eddie Murray Sportflics. To have four at once must be to know what it is to truly live.