In true Achiever Card Blog fashion I am here to wish everyone a wonderful holiday and a merry new year...on Jan6th. You know, after all of that has long since passed. Despite all evidence to the contrary I plan to continue this blog for the foreseeable future. There may be some changes. I'll try to describe some of them here. There also may be some changes that I have yet to think about and, therefore, would be unable to describe at this juncture.
I haven't been around much lately and unlike my other many hiatuses, this is not due to laziness. Well, not mostly due to laziness. As many of you know, I'm a dentist. At the end of the year there are many people who show up in the last 2 weeks and expect you to do all of the work that they should have been getting done the entire year. There isn't a lot of time to dick around on the computer.
Also at the end of this year, my wife, who is a prosthodontist (a dentist who specializes in really difficult and complex cases) is buying her own practice. Which means that I'm buying a practice (along with working at my regular office). This stuff takes up a lot more time than you'd think. All of this during Christmas which as you all know is normally a very relaxing and laid back time of the year. 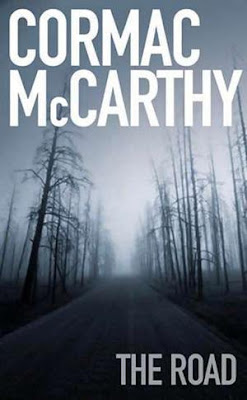 Then, there was the 2 days I lost to The Road by Cormac McCarthy. I'm not saying that I spent 2 days reading it. I'm saying that after I read it I spent 2 days in a darkened corner of my basement weeping softly while curled into the fetal position. It is without a doubt the bleakest thing I've ever read.
It is awesome. I definitely recommend it. It's one of those books that you will find yourself thinking about constantly.
Without giving anything important away, it is about a man and his son trying to survive in the most terrifying post-apocalyptic world I've ever imagined. Seriously, John Connor would long for the robots and Mad Max would just off himself. Thunderdome is like Space Mountain compared to this.
A few things to expect are these:
I know there is no way for me to post once a day. It just won't happen. My goal is 3 times a week. I really should be able to handle that.
And also, I plan to try to leave more comments on all of your blogs because...well...who doesn't love comments?
We'll see how it goes.
Posted by Motherscratcher at 4:00 PM

I'll gladly help you out if I have time. There's a few tricks up my sleeve planned for this year as well.

"Oh motherscratcher, you're so funny! Please come defend me on my Hall of Fame post cause I think some people want to choke me right about now."

Sounds good - I think there are quite a few of us "baseball card bloggers" who are planning to stretch the proverbial wings this year and post about more than just little rectangles of cardboard, hah. Can't wait to see what you have in store...and yeah, one of my Resolutions was to comment more on people's blogs that I read - check.

I didn't know you were a dentist. Now my mental image of you is a cross between the Dude and the misfit elf on the Rudolph special.

I wanted to choke Beardy, but then I found out that Capt. Canuck was badmouthing James Polk so I feel a little bad for him now. I'm still gonna talk about him on other people's blogs though.

Read "The Road" last summer, liked it a lot.

Looking forward to the non-card stuff as well.

We're with you, whatever you choose to write about.

Cormac McCarthy auctioned off his 1958 Olivetti typewriter recently (on which he wrote The Road and other books) to benefit the Santa Fe Institute. The final price: $254,500. A friend of his found an almost identical replacement for eleven dollars.