My love for the Repak is well documented. Well, it's documented twice anyway. I've never gotten an internet repak, though. So I decided to try my luck on one.

Technically speaking this isn't really a repak. At least it isn't advertised as such. It's advertized as "BASEBALL CARD LOT, STARS, RC, AUTO, GU, INSERTS, $75+++". But, make no mistake, it's a repak. You have just as good chance of getting something really good here as you do in any of the ones you pass up in the card isle every time you go to the grocery store or target.

That doesn't mean you won't get something interesting or amusing. And, at $10 it won't break the bank. It was around $5 for the cards and $5 for the shiping.

Here is the long winded description:

This auction is for (1) lot of mixed year baseball cards with at least $75++ worth of cards according to the current Beckett Baseball Plus price guide. All lots will include at least one GAME USED JERSEY guaranteed. Each lot is comprised from a selection of only Hall of Famers, Future Hall of Famers, current stars/minor stars, rookie cards, autograph cards, game used cards, limited serially numbered cards and inserts and will contain ABSOLUTELY NO COMMONS. The lots will be compiled from over 250,000 star/rookie/auto/game used/inserts/ graded cards that I have accumulated over the years. Some of the stars you could find feature all the top names in the MLB over the years including Rodriguez, Ramirez, Jeter, Ortiz, Rose, Brett, Mattingly, Griffey, Ripken, Bonds, Maddux, Ryan, Santana, Pujols, Ichiro, Guerrero, Jones, Puckett, Gwynn, Molitor, Clemens, Peavy, Beltran, Fielder, Wright, Mantle, Schmidt, Boggs, Schilling etc.. All the major brands are represented, Upper Deck, Bowman, Bowman Chrome, Topps, Topps Chrome, Finest, Fleer Ultra, Pinnacle, Leaf, Score, SP Authentic, Donruss, Playoff, Sweet Spot and the like. Are you sick of paying top dollar for packs that don't deliver? These lots will satisfy the baseball card collector in all of you and unlike packs for the same price, have guaranteed value. Check out my feedback on my sport card lots. This a great chance to bolster and diversify your present collection for a nice affordable price. Check out my feedback from my other lots that I have sold...Winning bidder to add $5 for safe, secure shipping.

Let's see if it holds up. I actually got 41 cards in the lot. Here are 15 cards, not necessarily picked at random, but I didn't put a lot of thought into it either (as per usual). 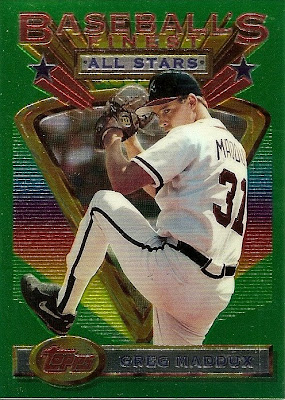 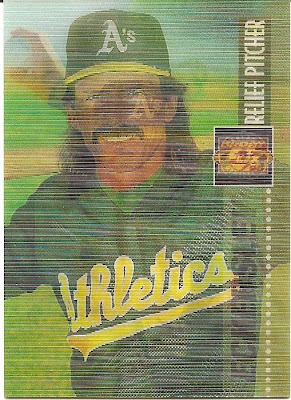 My love of Sportflix (or Sportflics, depending on the year) is also well documented. If I could get anyone to read this damn blog I wouldn't have to keep explaining this stuff to you. You'd already know. I will now spend a minute flipping my card from side to side. 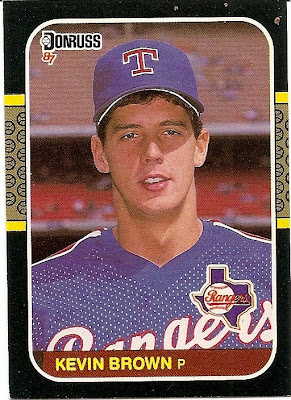 This isn't really Kevin brown. This is his little brother. Or the 13 year old kid that lives next door. I can't believe that Donruss fell for it. 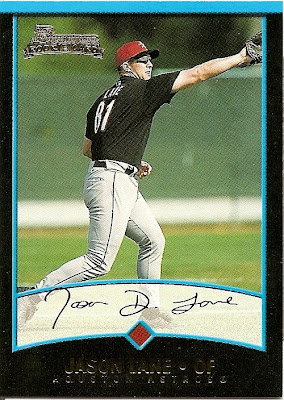 I don't know who this is. I thought he was the effeminate actor from the Birdcage. I guess this card's in here because it's a rookie card (allegedly). 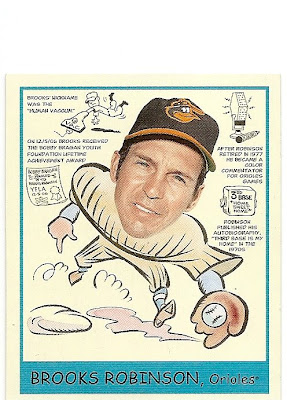 No offense to Brooks but this is a really stupid looking card. 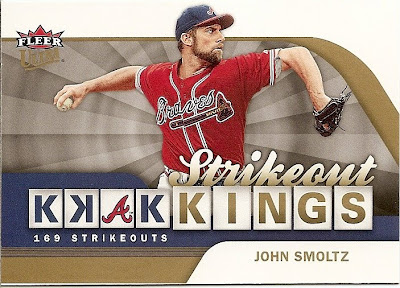 If I'm John Smoltz I'm not sure how I feel about appearing on a card with "KKK Kings" written right underneath my picture. I know they turned the middle K around (I guess the second guy to strikeout usually goes down looking), but maybe Fleer should have spent a little bit more time on the design here. I'm just saying. 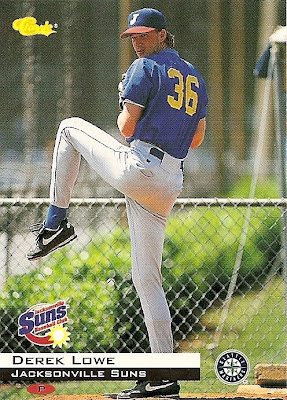 I don't know why, but I'm a fan of minor league cards of players I've heard of. 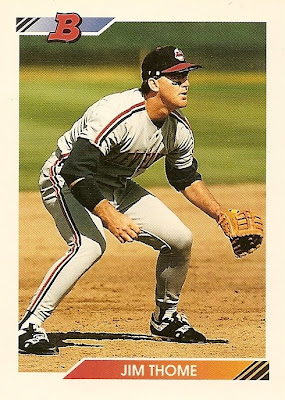 Not bad... a Jim Thome Rookie card (or rookieish card at least) With the protective coating I might add, which those of you who are frequent readers know is very important to me. For all we know, that coating might be what is sendi9ng the total value over the $75 mark. 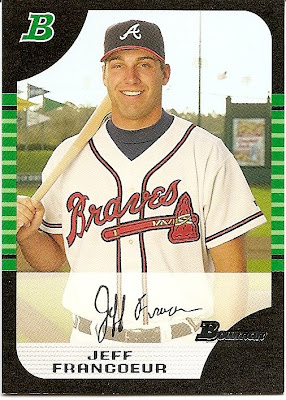 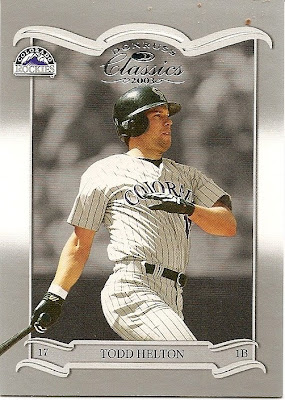 This is a very regal looking card. It looks all fancy restaurant and stuff. If this card was a restaurant it definately wouldn't have hubcaps on the wall and the waiters wouldn't have pieces of flare. It's so pretty I might think twice about letting my 10 month old son play with it and drool all over it. 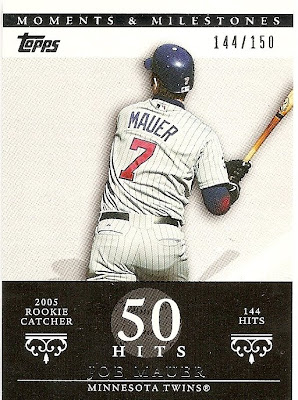 The first of 3 numbered cards. Imagine my surprise that it came from the Moments and Milestones set, where I believe every single card is numbered to something. Hey, with Joe Mauer you've got no complaints. 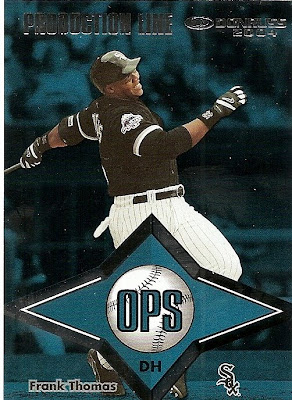 This is numbered to 952 because Big Frank OPSed 952 in 2003. This creates a situation where the better you are, the more cards will be produced and the less valuable they will be. Forget Frank Thomas...get me a Production Line card of Tony Pena Jr. Now that would be valuable. 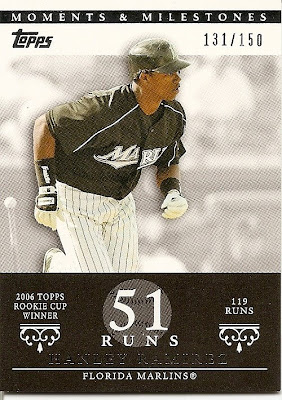 Another of those "rare" Moments and Milestones cards. Consider my ghast flabbered. 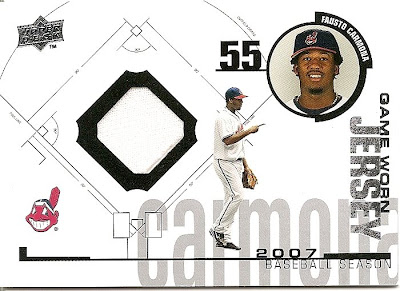 The "Hit" of the lot, I suppose. The alluded to "GU" card. Not bad for an Indians collector like myself. I'll always love Fausto for the bug game in 2007, even if he never quite puts it back together.

There were 26 other similar cards in the lot. I can't complain. He promised no commons and it's hard to argue that he didn't deliver on that. I got 3 worthless numbered cards and a worthless relic to go along with my worthless rookies, all stars, and hall of famers. Nothing to knock your socks off, but I didn't really expect anything to knock my socks off.

There's some fun stuff here, but there would have been no reason to buy this for $10 if I'd known what was in it. There are a lot better ways to spend $10. But, there are a lot worse ways too I suppose.

Did he deliver on his promise of $75++ Beckett Book Value? I hve little doubt he did, although I didn't look a single one of these cards up. I considered posting all the cards with the book value and add it all up for a good laugh, but I'm way too lazy for that right now.

I figure this is a good enough representation of what to expect from one of these "repak" lots. Not whole hell of a lot.
Posted by Motherscratcher at 4:46 PM

There's no comments on this post cause it's lame.

Why oh why did I start to move my phone back and forth when I saw the sportflix card..

Man, it looks like something you might get from some nut job on the net that hands out free packs of random cards...

That was actually fairly excellent as far as they go. Had me at the Maddux.