Here is another Workin In Shifts card review of cards that I did absolutely nothing to deserve. As usual, the most generous Blog Person of them all, David of Tribecards, sent them. He offered and even though I haven't sent him anything in a long time, I accepted. I have no shame.

And I love free cards.

So, what did he send me? About a week ago I got a package in the mail with 6 individually wrapped stacks of cards. It was like Christmas in July! Only it was August, but just barely, so I'm counting it. There were a few other things in the envelope that I will get to in a later post because, well, I forgot to scan them for this one.

The first pack I opened (and the other 5 remain sealed. I have tremendous will power.) contained 41 cards and a few hours worth of interesting stuff to think about and look at. I'm not kidding you. When I get these packages I really do spend a lot of time looking at what I got. I picked out a few of the cards to share with you now. And, to provide my usual nonsensical and funny only to me thoughts.

This blog exists mainly as a means to crack myself up. 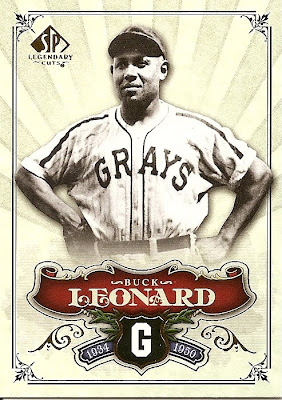 I really like all of the Legendary Cuts cards that I have laid my hands on, and this is no exception. I even have a box laying around ready to bust (what did I tell you about my will power). I never knew much about the Negro Leagues until about a year ago when I started to read Joe Posnanski's ridiculously awesome blog and I picked up a copy of his book The Soul Of Baseball about Buck O'Neil. If you consider yourself a baseball fan it really is something you should read. In fact, if one of my fellow bloggers wants to read it, email me and I'll send it to you (I'm not giving it up if you aren't familiar though, or a Yankees fan...just kidding).

The back of this card says that Buck Leonard and Josh Gibson were known as the "Thunder Twins". I thought that those were the superheros that could turn themselves into a bucket of water and a bird in order to put out a fire or something. Remember, they would bump fists and yell: "Thunder Twin Powers ACTIVATE!!!! Form of a bucket of water! Form of a bird!" Exciting stuff. Not sure what it has to do with baseball, though.

I always wondered how come they didn't have to find all of the water in order to reconstitute the one twin. I guess maybe that guy only turned into the bucket and then he was filled with water. But then, how could you possibly expect to put out a forest fire with one bird carrying a bucket of water that it has to keep refilling? You'd be better off having Jimmy Duggan piss on it. Even as a young kid I wondered these things (except the Jimmy Duggan thing. I think I was in college when that movie came out). But I wondered about the other stuff.

Actually, they were pretty lame Super Heroes when I think about it. They should have just left the name to Buck and Josh. 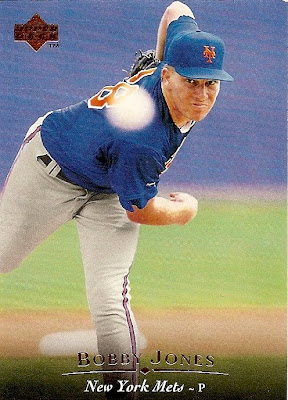 I just love these cards when they get the picture of the guy throwing the ball right at you. I like to think that the photographer was snapping off pictures until the last second before diving out of the way. Maybe the young photograhers took one on the melon occasionally, much to the delight of the grisled veterans. 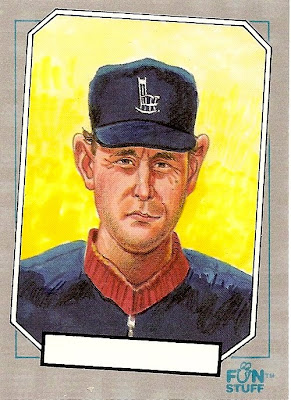 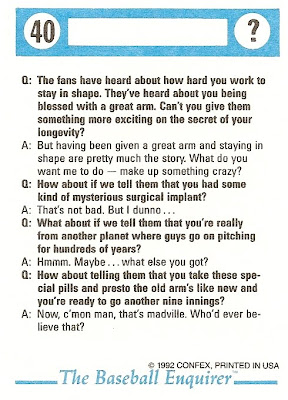 
I have no idea what the heck this is. The front says fun stuff. The back says the Baseball Enquirer. There is a picture with no name that looks like it's probably supposed to be Nolan Ryan but looks more like Robert DeNiro. And there's a rocking chair on the hat for no apparent reason whatsoever. What the hell is going on here? And, there's some sort of fake interview on the back. 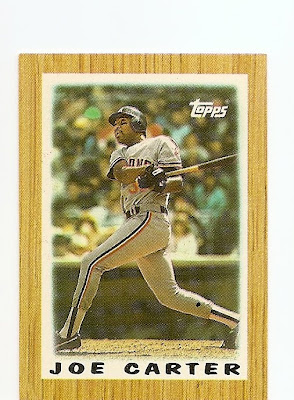 I don't know what it is about minis that I like so much. And I have fond memories of Joe Carter. I liked him when he was in Cleveland, and I liked that he brought us Carlos Baerga and Sandy Alomar Jr. I was happy for him when he hit that homer. 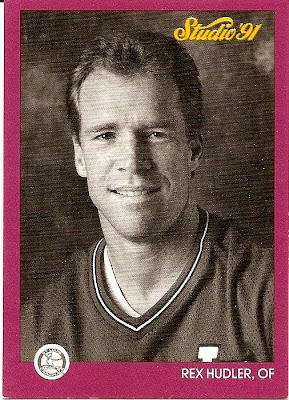 I love these stupid Studio cards. The backs never cease to crack me up. The only problem is that I liked Rex more before I got this card. And, I think I'm justified.

It says on the back that Rex is from Tempe. His favorite teams are the St Louis Blues, LA Lakers, and Dallas Cowboys. Talk about bandwagon, there's no way around it...what an asshole.

"Yeah, well, you don't seem to mind Lebron being a Yankee and Cowboy fan you stupid hypocrite!" you're saying. Well, you're right. I do love Lebron and I'll defend myself this way:

1. Lebron plays for my team
2. Rex Hudler will never be in the conversation for the greatest baseball player of all time.

As long as Lebron is a Cav he can rout for whoever the heck he wants.

Geez, another tangent. But see how much fun these Studio cards are? 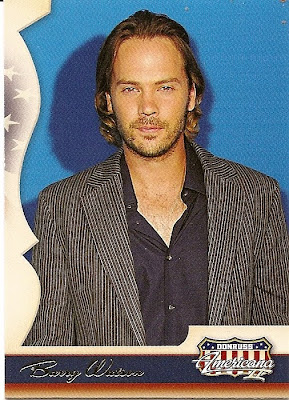 Barry is the famous actor who played the unmatched bachelor in What About Brian. So...yeah...uh...I still have no idea who he is. 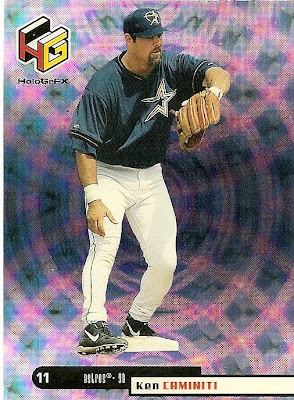 I can't help but be a little sad whenever I run accross a Caminiti card. I really loved that guy and I was shook up when he passed. And I was disappointed that he took steroids. Now...I don't care. I stoped caring a long time ago about the steroids. But, I still miss Ken. He was a hell of a ballplayer. 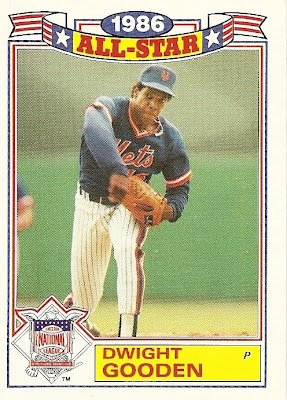 What could have been. 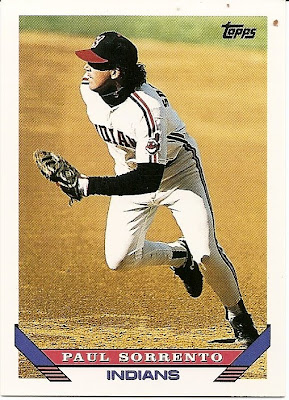 The forgotten man in the ridiculous Indians lineup of the mid 90's. Paul was steady. He was solid. He was nobody's favorite player, but we were all glad to have him. 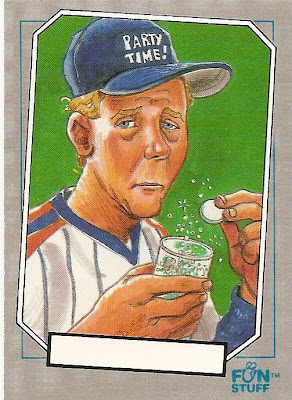 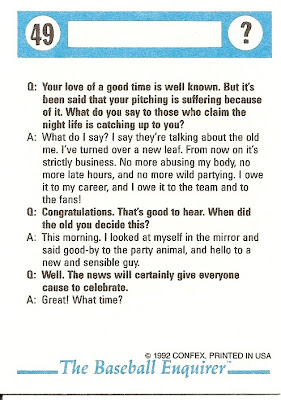 You know, for the kids. 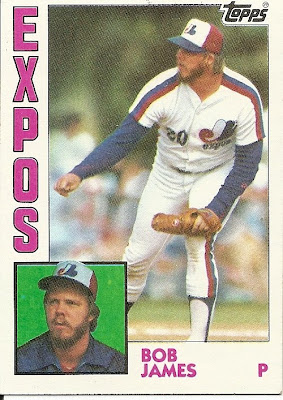 I don't know Bob James but I wanted to show this card for 2 reasons.

1. I like 1984 Topps (Mattingly Rookie)
2. Look how terrible those uniforms are. The hats are the worst.

I do like the way Bob wears his stirrups, though. And man, that guy could really fill out a uniform.

I especially like the picture of him in the bottom left where he's wearing his off-season car mechanic attire. 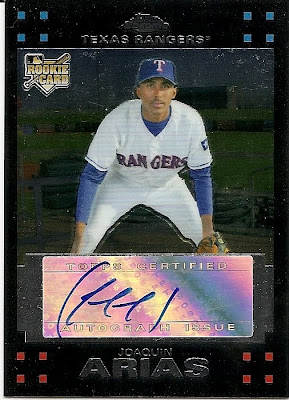 Sweet! An auto! I love auto cards. Juaquin is having a rough time of it. He's been up to the Big's for a cup of coffee a few times. This year in 3 games he is hitless in 8 ABs. On the bright side he has only 3 strikeouts, so that's less than half the time. I figure things have to start falling in sooner or later, right?

OK, that's enough for now. Thank you very much David.

And remember everybody, there are 5 more to come some time in the near future. Stay tuned.
Posted by Motherscratcher at 7:45 AM

We'll take these one at a time:

1. "My blog exists mainly as a means to crack myself up."

No, I'd be careful about the Yankee fans. You'd probably get it back. But Leonard would be drawn into pinstripes. The Yankees want every single player that existed, you know.

That was my first reaction to those Baseball Enquirer cards. But they amused the hell out of me. They're from a 1992 set. I've got a few of them. I have a hard time figuring out who they're spoofing with some of the cards.

4. "The only problem is I liked Rex Hudler more before I got this card."

Yeah, bandwagoners. Yuck. I know people who are both Yankees and Cowboys fans (no, none of them are Lebron). That should be illegal.

Ha! I thoroughly destroyed you in the contest for who gets the best Americana cards! I got 2 hottie actresses. And I have actually heard of one of them.

Sorrento was a leading player on my fantasy teams of the mid-1990s. Yeah, I suck at fantasy baseball.

step away from the laughing gas dental man!
those 'spos unis are classic! Timeless! And don't even get me started on the baby blues....

ROTFL! Great post! I'm glad you're having a good time with the cards! If you don't mind rubbing pencil on your card, I believe you can lightly rub the side of a pencil in the box at the top to reveal the name. Then again, I could be wrong and all you'll end up with is a lightly shaded box.

There are checklists online for the Confex Enquirer set, and I think there was a post on "Things Done to Cards" if memory serves. If I'm wrong, then maybe one needs to be done. Where was I?

Oh yeah, glad you liked the cards and can't wait to see what else ya got! I'm having as much fun watching you guys open them up as it was to send them!