I like 1982 Topps. It looks exactly 1982, if that makes any sense. Like a lot of kids I played soccer and baseball in the city leagues. I don't have my jerseys any more, but if I did I would bet that the numbers on the back are the 2-3 line variety, a lot like the borders to these cards. Enough of you probably know what I'm talking about.

Well, this set reminds me of that time. Those were good times. Therefore, I like this set, more than the other early 80's sets. Not that I don't like those, I just like this one more.

Now I have the best card in the set. It's a super rare variation SP of the Cleveland Indians Team Leaders card, #559B. It was sent to me by Travis over at the esteemed blog Punk Rock Paint.

It's pretty sweet isn't it? I defy anyone to find a better card in that set. 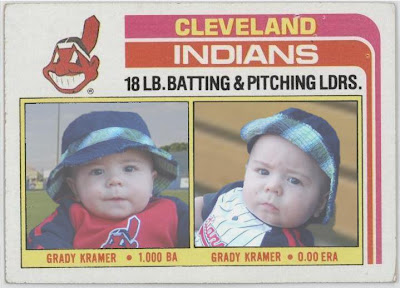 Look at Grady on the right there. That kids means freakin' business, doesn't he? He's not there to screw around.

Thanks Travis. Awesome card, dude.
Posted by Motherscratcher at 12:03 AM

Great card!!! That should be printed and framed. :)

The grinning wahoo Indian is eyeing Grady on the right very warily.

That is one of the best Tribe cards ever! And a 1/1 at that!