I Will Now Blow Beardy's Mind

Beardy has remarked to me on more than one occasion that he cannot understand how I have unopened wax ready to bust. He probably shares the majority opinion in that unopened wax doesn't usually last very long among collectors.

Well, here is a picture of my unopened wax boxes: 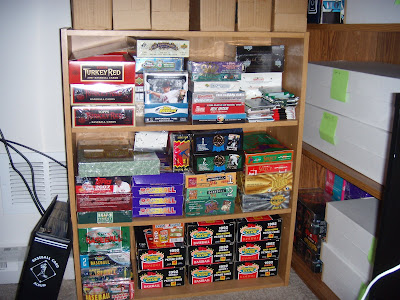 There are probably around 45-50 boxes to open. A few have some packs opened. The only one in this picture that is empty is the Turkey Red box in the top left corner. That is the box from the Turk Off. I usually would just throw it away but I got a call from Cooperstown so instead I'm sending it to the Museum.

Most is junk wax, or as Rob (VOTC) sometimes calls it, kindling. But it's still fun to open. Some of you out there have gotten some of the stuff pictured here, but the vast majority remains sealed.

There is some good stuff too. Some Chrome, Masterpieces. Turkey Red, Finest Threads...not too shabby.

I keep it because I refuse to get behind in my organization and filing. So, if I have cards to be filed I will not open new cards.

In fact, I'm all caught up right now. That box of 2009 Finest looks pretty good....
Posted by Motherscratcher at 8:59 PM

I sthat a MASSIVE stash of 91 or 92 Stadium Club with Kodak photography I see on the bottom shelves?

That's 92 Stadium Club. I was on ebay and someone was auctioning off 4 boxes each of series 1,2,+3. I won the series 1 and 2 and was sniped by someone for series 3.

I have no idea why I thought I needed 4 boxes each.

You need to open your own card shop. Look at that inventory!

I'm drooling at the site of that bottom shelf! Whenever I buy a box I only open a pack or two a day - it's like having a card shop in my house. Granted, not a very good card shop, since all they have in right now is 98 Collectors Choice... but still.

hot damn! my mind has indeed been blown.

HOLY SMOKES!! That is friggin awesome! I hadn't thought of the "until the collection is up-to-date" approach before. That actually makes a lot more sense than having piles and piles of cards wauting to be sorted and entered into the collection. I may adopt that method myself.

i salute your patience and restraint! many times i have failed to follow through on a "not until my cards are organized" resolution.

Avon is only ,maybe, an hour from me,let me know if you need any help catching up!I owe you an apology too. As soon as I get my home computer fixed.(I'm at work now but my time is limited)