Here is the Vintage Edition of the RPOK review. For the purposes of this post "vintage" will be defined strictly as cards from the 1985 set or older, even though 1985 cards aren't vintage (unless you are selling them for way too much money on Craigslist). It is amazing that vintage is being defined in this way for this post because, as luck would have it, one of the cards is from the 1985 Topps set. It's funny how things turn out sometimes. 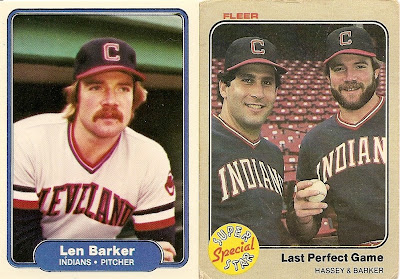 Len Barker is the otherwise ordinary pitcher who on May 15, 1981, pitched a perfect game. This is the greatest thing that happened to the Indians since 10 cent beer night. Even though attendance was a little over 7,000 that night, just about everyone in Cleveland was there.

See, I told you he pitched a perfect game. And, that other guy caught it. He even has a sweet beard. I'm not making it up, the Indians had a few good things happen to them in the 80's.

Judging by the background here, this picture was probably taken during the 3rd inning of a game in progress. 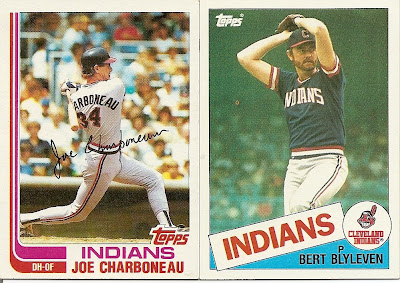 Super Joe Charboneau. Another one of those good things to happen to Cleveland in the 80's, even if it wasn't a good thing anymore by the time this card was made. I love this card for the photo of Joe. He just looks like a ballplayer there. I guess that isn't really much of a revelation considering...you know...Joe was a ballplayer. But, you guys know what I mean.

Here is the newest vintage card for the purposes of this post. Way back in 1985. That makes this card VERY rare indeed. People forget that Bert pitched part of his (should be) HOF career. in Cleveland. Maybe if more people thought about this maybe he would be forgiven for falling 13 wins short of 300 (as if wins mean much anyway). You don't think Bert would have gotten there if he didn't spend 4 1/2 seasons playing for Dave Garcia, Mike Ferraro, and Pat Corrales?

Ridiculous that he isn't in the hall. Especially when you consider his beard. 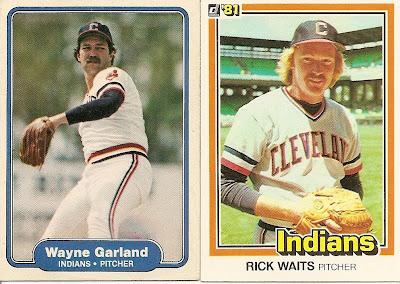 This card is interesting because...I like this card and um....The back of the card has a...Wayne Garland once...uhh...

I just like this card OK? Get off my back. 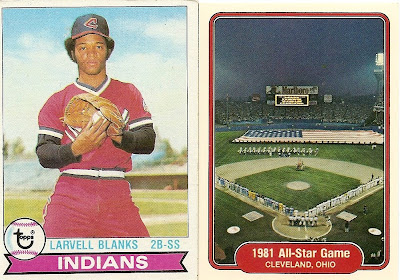 This card reminds me of the greatest blog post ever made. I love the red uniforms. When they have one of those throwback uni nights how come they never pull out this monstrosity? I would absolutely love to see a game against the old A's yellow unis. People might go blind.

1982 Fleer - 1981 All Star Game
can you believe that they had an all star game at that stadium? And, not too long after the Cuyahoga caught fire. it's unbelievable to me. How many players do you think faked injuries that year to get out of the game?

I love the card, though. Municipal Stadium getting it's own card. Nice 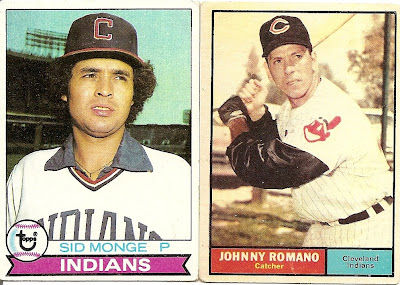 My favorite thing about Sid Monge, by far, is that his name is Sid Monge. Sid is vastly underused as it is. When you team Sid up with Monge, well, I'm sure you'll agree that it's glorious. Just magical.

And look at Sid. the excitement just radiates off of him. He's looking very dapper in his collared shirt underneath his uniform. I get the feeling that he's just praying that the other kids at home in Mexico don't ever see this card of him in the Indians jersey. He'll never live it down.

My first ever 1961 card. I have only a hand full of cards older than this one. I was very excited to see it and learn a few things about a Triber who I've never heard of.

Turns out that Johnny was an All Star the year of this card He hit 91 HRs for the Tribe in the 5 seasons that he spent with them. His home is Hoboken, his nickname is Honey, and (according to the back of the card) he spends his spare time constructing things out of wood.

Can you believe it? That's what it says. I guess they figured there was no need to be more specific than that. Just things out of wood.

That's the best thing about old cards on these blogs. Before this I probably would have glanced right past this card and not taken the time to learn something about Johnny. And, Johnny deserves that I know something about him. Don't you think so? 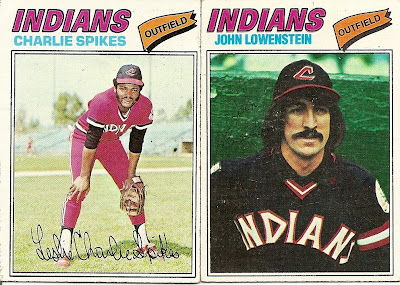 Fantastic card. I'll never get tired of those red uniforms. And how great are Leslie's burns (his name is Leslie Charlie Spikes). Looking for something nice to write about Leslie, Topps came up with this tidbit on the back of the card: "Voted as Tribe's Most Outstanding Player in 1973 Training Camp by news media."

Can you get a load of that? Most outstanding in training camp? Can you believe that there is such a thing? That is too fantastic.

Congrats Chuck. Now you can sit your grand kids on your knee and tell them about the 1973 training camp. Just hope they don't ask you what you hit during the real season (.237).

To be fair to Charlie, he did hit 23 hr that season. Not too shabby. Not shabby at all.

Could there possibly be a better card to end on that Lowenstien's? Is this a great card or what. At the time of this card, John had spent his entire career, starting in 1970, with the Tribe. The tidbit that Topps came up with was: "A speedy baserunner, John has career total of 69 Stolen Bases for the Tribe."

Don't worry, I've done the math for you. John stole an average of just under 10 bases a season.

Blazing speed. I can just imagine that glorious hair billowing out behind Speedy John as he stretched a double into a triple. You know, one of the 8 triples this burner hit to this point in his career.

Thank you again David. I love getting your free cards. And, now I can sign up for another team!
Posted by Motherscratcher at 8:30 AM

ROTFL! Man, it is funny to read what you get out of the stuff I send your way.