Turk Off Prize From Beardy!

My payday has arrived. I recently got my prize from Beardy for winning the Turk Off. You might have read about in on ESPN.com or seen the 60 Minutes story.

I got some really fantastic cards as my prize and I will present them here. There are a few autos, a couple serial numbered, a lot of Indians (not all of which are posted here), and of course Grady Sizemore. 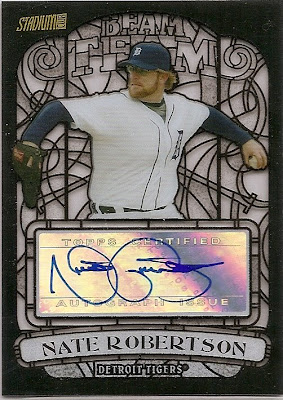 This is my favorite card that Beardy sent. Not because I love Robertson in particular (I have no strong feelings for him one way or the other), but because the card is so cool. First of all, I love the design. A hear a lot of people complain about black borders because they are so easily dinged, but I like them. This card has a perfect border anyway. And the tranparent stained glass window effect is really nice. I hadn't seen any cards like this. Didn't know they existed in this set.

Also, Nate has one of the best autos around. The vast majority of players just make a scribble, like they can't be bothered. Nate took enough time to make a complete, and very cool looking, auto. I just became a much bigger Nate Robertson fan after getting this card. 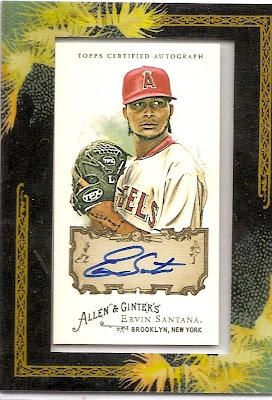 Ervin was lights out last year. I know. I picked him up cheap on my fantasy team. It's always very satisfying to do that. I haven't heard much about him this year. I think he's hurt, or something.

I really like these autos in the A & G with the loose mini inside the cool border card. Ervin has a nice auto too. I'm not sure if it's abreviated or not, but it fits the space perfectly and it's more than just a scribble. 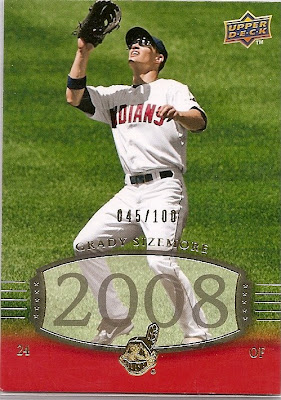 Ah...Grady. My main man. Serial numbered even. I think Beardy pulled this out of the Timelines box he just busted. As you well know I'm a fiend for Sizemore cards. This one is very much appreciated. 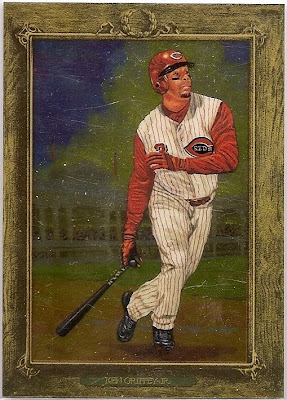 I don't believe that this was pulled during the Turk Off. Beardy knows what I like, and I likes me some Turkey Red. Actually, my long term plan is to collect every Turkey Red card and parallel starting with the 2005 set. It will take years, decades even, and almost certainly won't ever be complete. But, it will be fun trying and it will give me something to focus on. 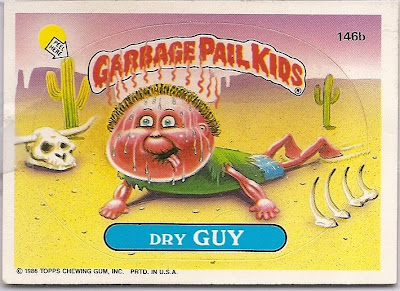 I'm not sure what series this is. Probably 2 or 3. On the back is a part of a puzzle. I have no idea where Beardy comes up with this stuff. My GPKs were gone a long time ago. I love these things. 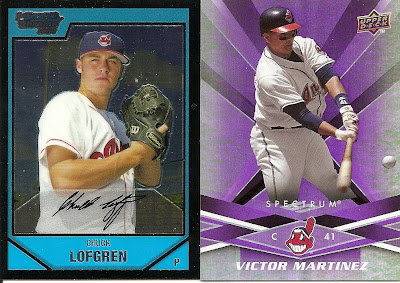 Chuck is on the Indian's short list of potential starters for this season. So far we have Lee, Pavano, and a hodge-podge of starters filling in the last 3 spots. With Fausto Carmona going all Dontrelle Willis on us, there is an even greater chance of seeing Chuck sometime soon. The reports on him are good. I'd be astounded if he doesn't get a shot sometime in the next few months.

This must be from Beardy's recently busted box. He seemed less than impressed with this product. This is a cool card, though. Martinez has cooled off a bit recently but he's still hitting around 350. This guy is an great player. A few weeks ago rumors had him going to the Red Sox for a package including Bucholz. I'd be sad to see him go but I'd love to add Clay. Probably never happen, though. 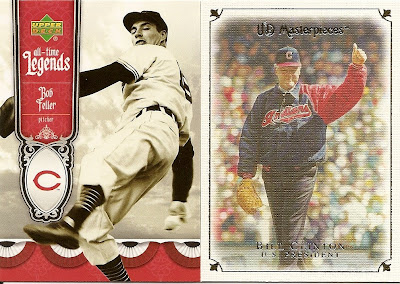 In Cleveland we love Feller. When he wasn't terrorizing American League hitters, he was terrorizing fascists as an ace pilot. We built a statue for him outside the Jake.

I love the card. The photo is black and white so you can't see Bob's red ass.

I love this card. I didn't know there was a card with him in Tribe gear. This one is from when he threw out the first pitch when they opened the Jake. I'm a big fan of the former pres. Not to get all political, but he just always impressed me when he was interviewed and I heard him talk. Whether you agree with him or not, I think it is tough to deny that he has a well reasoned, thoughtful opinion on most subjects. Basically, he's not a dummy. 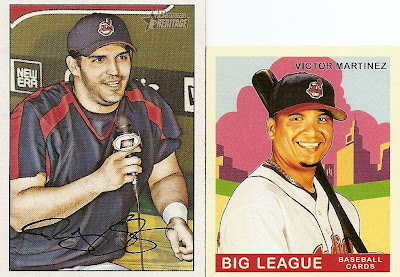 I always liked Garko. He hasn't turned into a premier slugger first baseman type, but he has his moments. The back of his card says that he was born in Pittsburgh. I wish I hadn't read that.

The more Goudey I see, the more it grows on me. 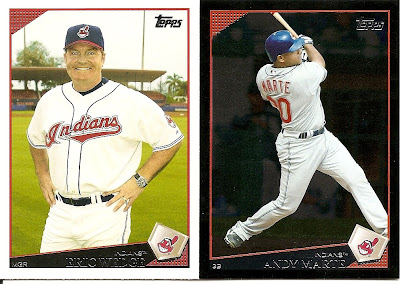 I hate this card. I hate it because that man you see on the front is an imposter. I like Wedge. The ranks of Wedge appologists dwindles with each consecutive horrible April, but I still can't convince myself that it's Wedge's fault. But this isn't Eric Wedge. Eric Wedge does not smile. Ever.

This is not my manager.

For some reason I cannot keep it straight which ones are Target and which are Walmart. In any case, I like these black ones better. And this is a sweet looking card of Marte.

I can't belive that he is still with the Tribe. He was so bad the last 2 years that this once top flight prospect made it through waivers. He's back in AAA, and guess what? He's hitting the crap out of the ball again.

Is it time to give this guy another chance? 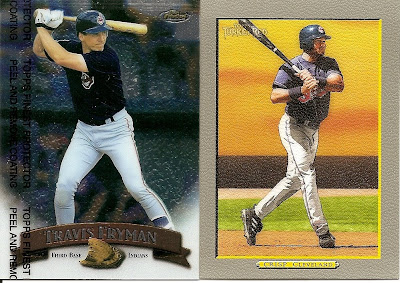 The protective coating is still intact here which means so is the book value. Thank god for that.

I loved Fryman in Cleveland. If I'm not mistaken he's still with the organization as the manager of the Mahoning Valley Scrapers.

I love this card. I love all things Turkey Red (as you all well know). I was actually at the Tribe game last night. An endodontist I know (root canal dentist) had some tickets and called me last minute. Good times. That's actually why this post didn't go up last night.

The Tribe won it in extra innings when Choo drove in the winning run off of Kyle Farnsworth (The Royals fans are shocked by this, I'm sure). The hit clipped a seagull and got by Clisp.

It was high comedy watching Clisp act all indignant about it, as if he would have definately gunned down DeRosa at the plate, what with that cannon he has bolted onto his shoulder. If not for that crazy bird they might still be playing right now.

I don't have any of these cards. I had no idea they were so awesome looking. These 3 are good ones to end on. The scan does NOT do them justice.

Thank you Beardy. The Turk Off was great. I got lucky.

You were definately a Worthy Faqin Adversary. The Beard in the black Pajamas.
Posted by Motherscratcher at 10:44 AM

Glad you enjoyed them. Your package arrived today. You must have Markakis mojo or somethin

Oh, and that's my last GPK.