Feel free to move along. This post is about my kid and stuff.

I'm that guy. You know the one. The idiot who takes his infant son to the ballgame and disturbs everyone sitting around him. Judge me if you want, it was awesome. Seriously good times.

About a week ago, Sunday, 5-31 to be exact, Grady attended his first Tribe game. Against the Yankees no less. My friend Brad and his wife, who Katie and I get about 10 tickets a season with, also have a new member of their family. Riley is about 10 months. Grady is about 8.

We had tickets for that game, but never got around to getting a babysitter. I guess we figured that it's never too early for the kids to start rooting for the Tribe and hating the Yankees. Maybe Gloria James should have taken Lebron to a game when he was just a little guy.*

*I'll give Lebron a pass for his Yankee fandom. I figure since he is...you know...the greatest basketball player on the planet, he can root for whatever freakin' baseball team he wants and I'll still want him on my team. I have no idea why this is an issue.

So we packed up the kids and headed on out to the Jake (or Prog, I guess). It was Carl Povano vs Phil Hughes. Unfortunately, Grady's namesake (Grady Sizemore for those of you who have never read this blog before) was put on the DL that day and didn't play.

In the 9th, Eric Wedge must have decided that it makes little sense to save Kerry Wood for save situations when we rarely seem to be in them. I was very happy to see him. They Yankees weren't as Wood pitched a scoreless ninth. Peralta singled in the winning run in the bottom of the ninth off of David Robertson who tried in vain to clean up Phil Cokes mess.

To tell the truth, we didn't know what to expect. I hoped we'd last more than 3 innings. Figured we'd have to leave around the 5th or 6th. I was wrong. Both kids were great. No crying or anything. They lasted the whole game. Everyone around us loved them. (What do you expect? People love babies.)

I screwed up and didn't take many pictures. I did get a few so here they are.


Here is my wife Katie (who wouldn't let me name him Dayf) and the kid. 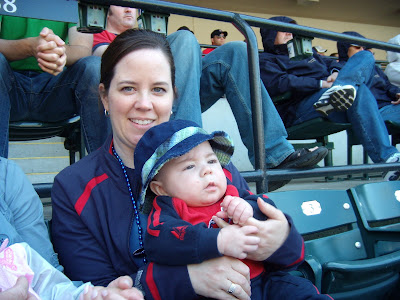 Here is Katie (doing her Earl Hickey impression), Grady, Lisa and Riley. I need to get Riley one of those pink "Grady's ladies" shirts. If you think that there are not constant jokes about the future of little Grady and Riley to my friend Brad, you don't know me very well. 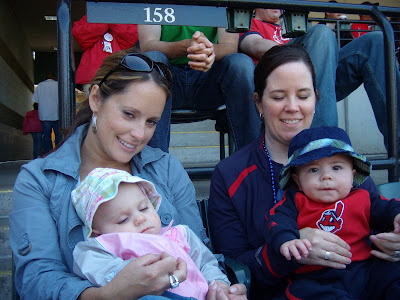 Here I am with the Kid before we realized that it was cold as hell and we needed to get him something warmer to were. You know, the way good parents do. 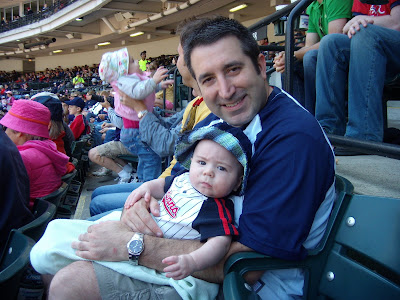 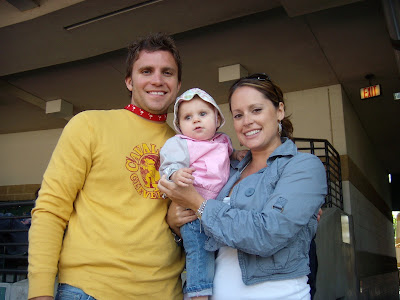 This is Grady in the 8th inning right after Mark Teixiera tied the score. 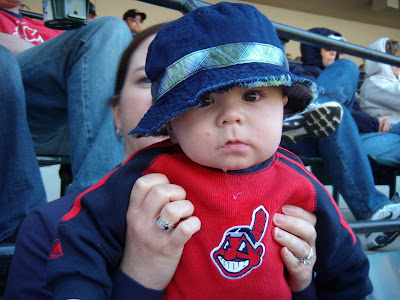 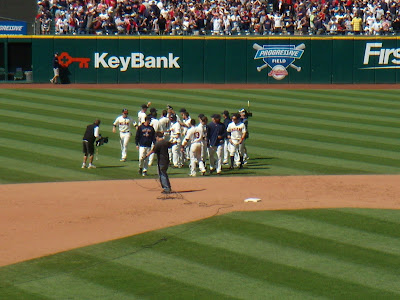 And, here is Grady after the game, exalting in the glory of the win. Looking an awful lot like his dad; fat, dumb, and possibly slightly drunk. Don't worry, the girls drove. (And I wasn't really drunk anyway). Can you believe that not too long ago this kid weighed 3 lbs? 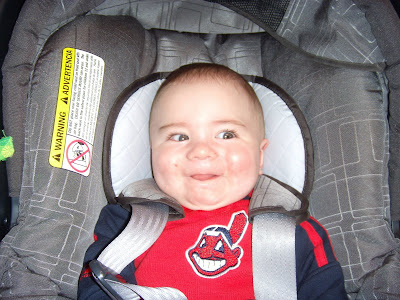 Going to the game I was getting all of these mental images in my head about how I was going to make Sportcenter. I could see it happening. Mark Derosa would foul off a ball. Id be holding Grady in my left arm. Seeing that I had time I'd slowly put my beer in the cup holder and stand up. Shielding the kid, I'd slightly turn my back to make sure he was safe. With my right hand I'd make a sure, barehanded grab of the ball. The crowd goes wild for me. Seeing the spectacular play, the TV people come and do an interview with me. Word gets back to the dugout that the guy who made the amazing play has named his kid after Grady Sizemore. We get invited to the clubhouse after the game. Grady, instantly recognized as the good luck charm is made into this season's mascot. We are given season tickets and a free limo to every game. Inspired, the Tribe goes on a tear, easily overtaking the anemic AL Central and win the division going away. The season ends with a World Series win against LA. We are flown to LA for the series clinching game and, ever the good sport, Night Owl takes us all out to a fancy restaurant after the game: the In-N-Out on Radford.

It almost happened. Maybe next time.
Posted by Motherscratcher at 11:59 PM

Good sport after the Dodgers lose in the Series? Ha!

I'll be locked in the hotel bathroom. Just me and a few items from the complimentary bar, as I curse Joe Torre's pitching decisions.

But you, Grady and the family have a good time. I'll be OK.

Great post! This will be a good family memory.

Very nice! We have a 15th month old and 20 game packs to the Brewers and all I can say is enjoy it while it lasts.

I can't remember the last time we actually got to sit in our seats as he was always grabbing other peoples hair and food! Couldn't sit still for a minute. Now we bring the stroller and go to SRO or walk around the stadium. Its still a great time for him.

Cute fucking kid. It's never too early to breed that Yankee hatred into a child. If you wait too long, it might be too late.

My favorite is Grady's face after Teixeira tied it up, as opposed to after the game. Not even children like that guy!

NO ONE SHOULD NAME THEIR KID DAYF

That's what my wife said.

Thanks for the nice comments. Yeah, the kid's pretty cool. We've decided to keep him.

Best post ever. Does Grady prefer toploaders or binder pages?

Grady has indicated to me no special affinity to either top loaders or binder pages, as he uses both depending on the situation and his mood.